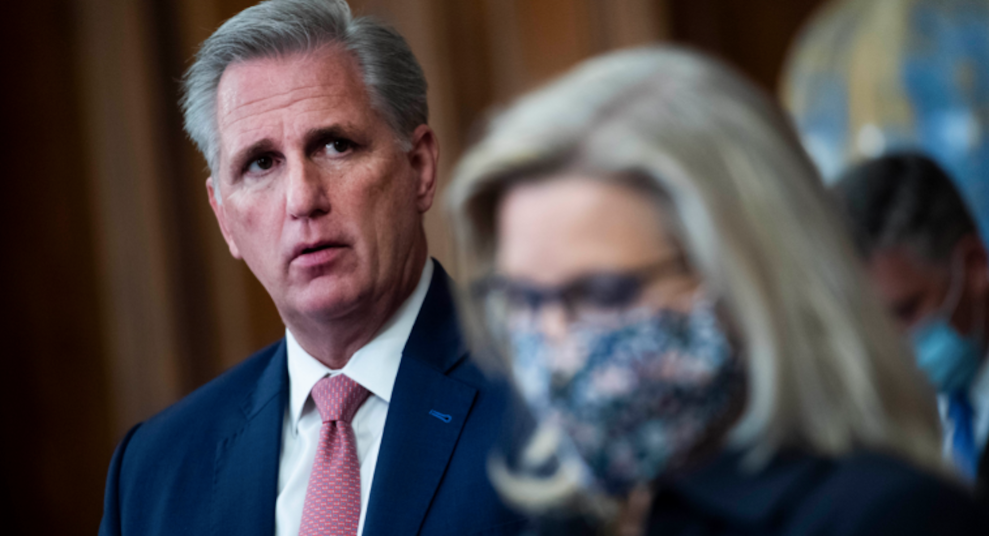 Rep. Liz Cheney’s refusal to go along with the GOP’s increasing embrace of Donald Trump’s lie, that the 2020 election was stolen from him, appears to have reached a crisis point for the third-ranking House Republican.

“I have heard from members, concerned about her ability to carry out the job as conference chair, to carry out the message,” House Minority Leader Kevin McCarthy told Fox News Tuesday. “We all need to be working as one if we’re able to win the majority.” The remarks come on the heels of a tweet from Cheney, in which the Wyoming congresswoman unequivocally pushed back on a statement Trump had issued earlier on Monday falsely calling Joe Biden’s victory “THE BIG LIE.”

The 2020 presidential election was not stolen. Anyone who claims it was is spreading THE BIG LIE, turning their back on the rule of law, and poisoning our democratic system.

But by simply telling the truth, as Cheney did with her tweet, she has since set off a firestorm of outrage among her Republican colleagues, many of whom are now clamoring for her removal as Republican conference chair. The tensions spilled into a closed-door meeting later on Monday, where Cheney once again warned Republicans not to accept Trump’s falsehoods about the election, nor should they “whitewash” the events of the deadly January 6 Capitol insurrection. “It’s a poison in the bloodstream of our democracy,” Cheney said referring to Trump’s lies, according to sources in the room who spoke to CNN.

“We can’t whitewash what happened on January 6 or perpetuate Trump’s big lie,” she continued. “It is a threat to democracy. What he did on January 6 is a line that cannot be crossed.”

What’s notable now is that Cheney’s position has not changed; she’s simply repeating her stance on Trump’s actions in the Capitol insurrection. Instead, it’s the note of reproval in McCarthy’s newest comments that signals that Republicans, in the months since January 6, have grown comfortable in openly supporting Trump’s blatant lies. Where once McCarthy had stood by Cheney, thereby saving her from a party vote to remove her from the leadership team, he now appears to have had enough of the truth.