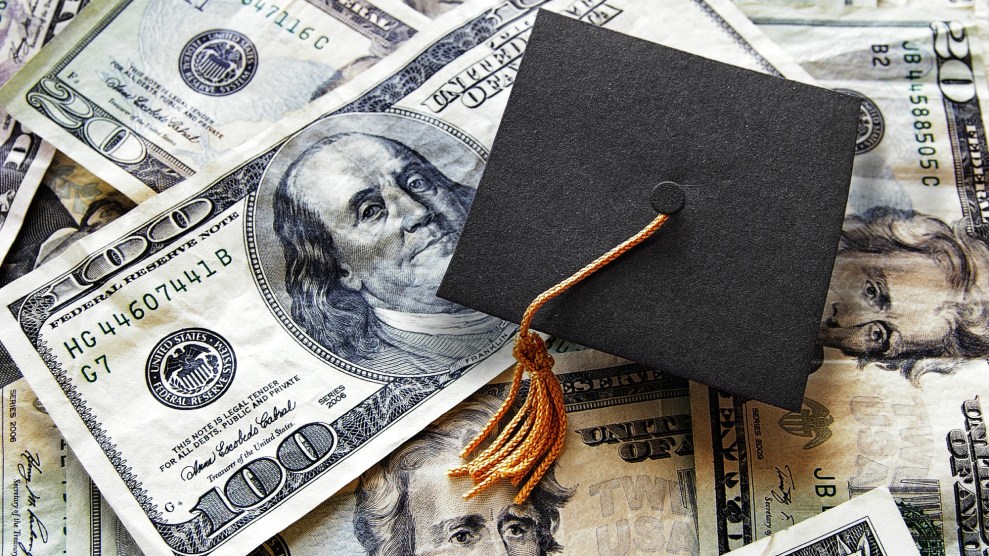 Nearly six months into the Biden presidency, the student debt cancellation that he campaigned on is nowhere close to becoming reality. That’s in part due to the persistence of the idea among some economists and politicians that debt cancellation would be regressive—that it would disproportionately benefit higher-income households.

But a new study debunks this notion, showing that when the effects of canceling student debt are measured by race and household wealth—and not just by income—the impact of cancellation is profoundly progressive, benefitting the least wealthy Americans the most and helping to lessen racial wealth inequality in the process.

“The regressive cancellation myth rests on a series of misleading methodological foundations,” write the authors of the study published Tuesday by the progressive Roosevelt Institute. When the impacts of cancellation are measured with an eye toward household net worth, race, and several other factors, it becomes clear that “it would provide more benefits to those with fewer economic resources and could play a critical role in addressing the racial wealth gap and building the Black middle class.”

On the campaign trail, Joe Biden promised to cancel up to $10,000 in student debt for most individuals, and to forgive all debt for people earning up to $125,000 a year who graduated from public colleges and historically Black colleges and universities. But debt cancellation was absent from the sweeping infrastructure package he unveiled in March and from his budget proposal for the coming fiscal year. The Education Department’s review of presidential authority to cancel debt has quietly dragged on for months, with no end in sight.

Hesitancy around debt cancellation stems from concerns that its benefits would skew toward wealthier people. The evidence for this notion comes largely from a 2021 paper by two finance professors, one at the University of Pennsylvania’s Wharton business school and the other at the University of Chicago’s Booth School of Business. The paper used household income data from the Federal Reserve’s Survey of Consumer Finances to conclude that debt cancellation is “highly regressive, with the vast majority of benefits accruing to high-income individuals.” This was in part due to the fact that majority of student debt is held by top earners—the lawyer and doctor class that took on big loans for graduate educations but now have hefty salaries as a result. Were some debt to be forgiven, these already high-earning folks who borrowed the most would get a larger cut, that paper argued, benefitting “the top decile as much as the bottom three deciles combined.”

That paper’s authors found this to be the case across various competing debt proposals. Sens. Elizabeth Warren (D-Mass.) and Chuck Schumer (D-N.Y.) have proposed forgiving up to $50,000 of student debt, while Biden has expressed more enthusiasm for a plan that capped cancellation at $10,000 worth of loans.

But the authors of the new Roosevelt Institute study point out that this analysis focused too narrowly on household earnings, rather than on net worth, a fuller measure of a household’s assets—and a measure that accounts for the intergenerational wealth transfers that fuel economic inequality by enabling some households to more easily pay off student debt or to avoid taking it on in the first place. The authors used the same Federal Reserve data to analyze which households would benefit most from cancellation but tweaked their number-crunching to focus on net worth. They found that at each proposed level of cancellation—$10,000, $50,000, or the $75,000 proposed last year by the Roosevelt Institute—those with the least net worth would see the biggest benefit. They made a chart to illustrate how benefits of cancellation start high for those with lower household assets, gradually decreasing for those with the most wealth:

“Student debt cancellation represents a progressive wealth transfer at all proposed levels of cancellation,” they write. “In fact, a more substantial plan is the more progressive option.” Compared to the Biden-favored $10,000 forgiveness option, the Warren-Schumer $50,000 proposal would result in almost no additional benefit for the absolute wealthiest, the authors find, and an extra $1,000 on average for those in the second-wealthiest group. But it would send more than $4,000 to those in the 20th to 40th percentile of wealth.

The study’s authors made a number of other adjustments to their analysis of the data. They removed private debt, since current cancellation proposals address only federal loans. They looked at the impacts of cancellation on the full population, including all the wealthy people who wouldn’t benefit from cancellation because they carry no student debt. And crucially, they looked at the distribution of student debt by race, combining race and net-worth data to find that Black borrowers would receive far more benefit from student debt cancellation than white households at all income levels, due to the fact that Black borrowers owe almost twice as much as their white counterparts. For instance, Black borrowers in the bottom 10 percent by net worth would gain around $17,000, and white borrowers in that same category would get around $12,000. The wealthiest households across all races, meanwhile, would gain an average of just $562 from debt forgiveness.

“Student debt cancellation could be considered a form of racial reparations, helping to provide Black families and Black professionals with wealth transfers that have systematically been denied to Black Americans,” write the authors.