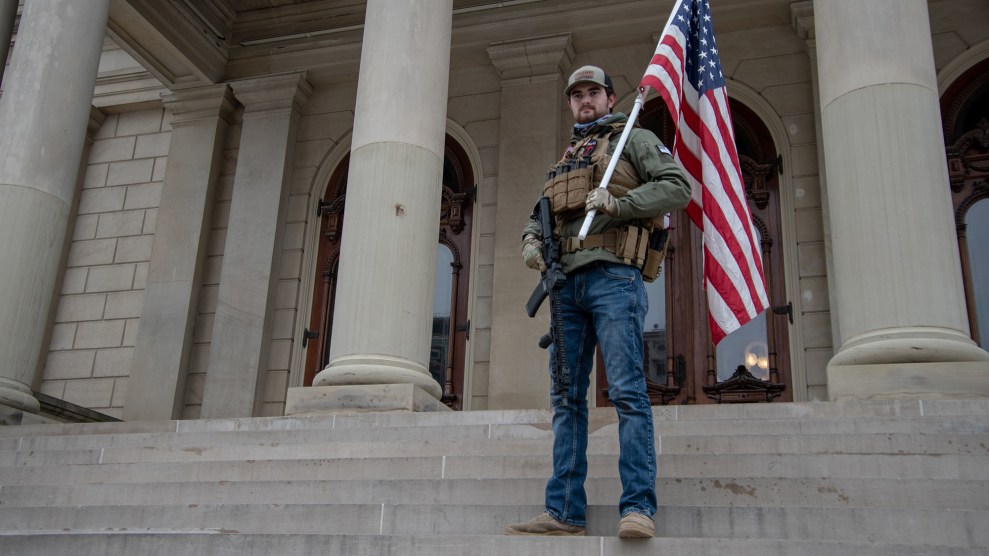 An armed Trump supporter outside the Michigan Capitol on January 6Adam J. Dewey/NurPhoto/Zuma

Following a monthslong investigation into a litany of dubious election fraud claims made by former President Donald Trump and his allies, a GOP-controlled Michigan Senate panel concluded Wednesday not only that the state’s 2020 results are accurate, but that some of those who continue to push such claims should face criminal investigation.

A 35-page report, released Wednesday by the Michigan Senate Oversight Committee, “found no evidence of widespread or systematic fraud,” and says that anyone continuing to claim there is has “zero credibility.” While that conclusion is obvious and reality-based, it is notable coming from a report crafted by three Republican elected officials.

False claims about malfeasance in Michigan from Trump and his attorneys, particularly Rudy Giuliani and Sydney Powell, have been central to the idea that Trump somehow would have won—or did win—reelection if not for widespread fraud there and in other swing states, like Pennsylvania, Georgia, and Arizona. When such claims have been included in lawsuits brought by Trump and his supporters around the country, judges have dismissed or explained them as exaggerations, distortions, or misunderstandings. Nonetheless, they were an animating factor in the deadly January 6 storming of the US Capitol by Trump supporters who were told the results were fraudulent, and have served as the basis for hundreds of proposed or passed state laws that restrict voting. In Michigan alone, Republican legislators have introduced 39 election-related bills this session, including some advancing strict voter ID requirements.

“I don’t think any reasonable person could look at the information that we looked at and not come to that conclusion.”

Sen. Edward McBroom, the Republican chair of the oversight committee, wrote in the report that when he agreed to investigate the election, “rumors and uncertainty were rampant,” including “dead voters, mystery ballot dumps, foreign interference, and ballot harvesting.” After months of investigation, he found nothing to them, and delivers a clear takeaway—”the results of the Michigan election are accurately represented by the certified and audited results”—adding that further investigation of the most high-profile case would be “a complete waste of time.”

Before the report’s release, Sen. Jeff Irwin, the lone Democrat on the committee, warned that the very existence of the inquiry aided Trump’s efforts to overturn the results. On Wednesday, he told Mother Jones its hearings had elevated claims that “did not contain even a basic shred of credibility in the first place” giving “platform to people who were later called out in the report as fraudulent.”

Even so, in the end Irwin says the facts his Republican colleagues collected simply wouldn’t support any other conclusion. “Having sat on the committee this many months, having taken in the testimony, it was fairly obvious that the committee was going to come out with some sort of rebuke of the Big Lie—because it’s just so obviously untrue,” he said. “I don’t think any reasonable person could look at the information that we looked at and not come to that conclusion.”

While he says he agreed with the GOP-drafted report’s overarching findings and was struck by its endorsement of criminal sanctions for some pro-Trump activists and its “strenuousness,” he cast a vote against it, disagreeing with several recommendations that would limit access to the polls. While Irwin’s name appears on the report as a member of the committee, he did not collaborate in its drafting and declined an invitation to craft a section.

Jocelyn Benson, Michigan’s Democratic secretary of state, issued Mother Jones a statement that emphasized the inquiry had only confirmed “what 250 audits, numerous courts, countless election officials and the majority of Michiganders” already knew. “The report is only noteworthy because it affirms this truth and comes from a committee chaired by a Republican legislator,” she said, warning that it contained “inaccuracies” and “further misinformation” that could be used to restrict voting rights.

The committee specifically debunked some of the Trump crowd’s most eye-grabbing and widely cited conspiracies, including that deceased or out-of-state voters took part in the election, that unsolicited absentee ballots were mailed out, or that the confusion and chaos at the ballot-counting hall in Detroit’s TCF Center resulted in any fraud.

Most notably the committee addressed claims that votes were switched from Trump to Biden in Antrim County, a small county in the north of the state that for many Trump voters has become the epicenter of Michigan’s—if not the nation’s—2020 conspiracies. Despite a full hand recount of the paper ballots, an explanation of inconsequential human error from the secretary of state, and a similar finding by one of the nation’s foremost election security experts after a thorough review, the unfounded notion that the county’s vote tallies were digitally manipulated in Biden’s favor has persisted.

The new Republican-led report once again validates the county’s reported results, and says continued claims of manipulated votes there are “indefensible.” The committee “is appalled at what can only be deduced as a willful ignorance or avoidance of this proof perpetuated by some leading such speculation.”

One such person, according to the committee, is Matt DePerno, a Michigan attorney who waged an Antrim-related lawsuit, raising more than $321,000 for so-called “election defense,” according to Bridge Michigan, a local news site. DePerno has peddled his claims and passed the hat online and on shows like the War Room, hosted by former Trump strategist Steve Bannon. The committee called DePerno’s accusations “demonstrably false and based on misleading information and illogical conclusions.” As McBroom told the site on Wednesday, there is “good reason” to conclude that such conspiracy theorists are “purposely defrauding people” of their money; reporter Jonathan Oosting says the office of Democratic Attorney General Dana Nessel is reviewing the Republican-led report to “determine if a criminal investigation is appropriate.”

The report discussed election-administration problems that local officials in both parties agree exist, including the need for more training and support for Election Day workers and observers and more time for advance processing and tabulating of ballots. It also pushes reforms generally sought by state Republicans, including a ban on mailing unsolicited absentee ballot applications to voters, as Michigan did amid the pandemic and ahead of the 2020 election.

The Republican authors opened with an observation that increased political polarization over the last 20 years has led to distrust of election results, pointing to contemporary polling suggesting a majority of voters “no longer trust our elections.” That distrust, the authors say, is why the committee sought to examine the claims about 2020, in hopes of restoring faith.

Nowhere in the report, though, do the authors identify the loudest and most consistent source of willful deception and lying about what happened in 2020 in Michigan: Donald Trump, the former president and reigning leader of their party.

As recently as May 7, Trump said that Michigan senators “should be run out of office,” doubting their enthusiasm for reviewing what he called “the Fraudulent Presidential Election of 2020.” Today, those senators wrapped up their work, reaching an inescapable conclusion. Now we’ll see how Trump and other Republicans continue to fight it.