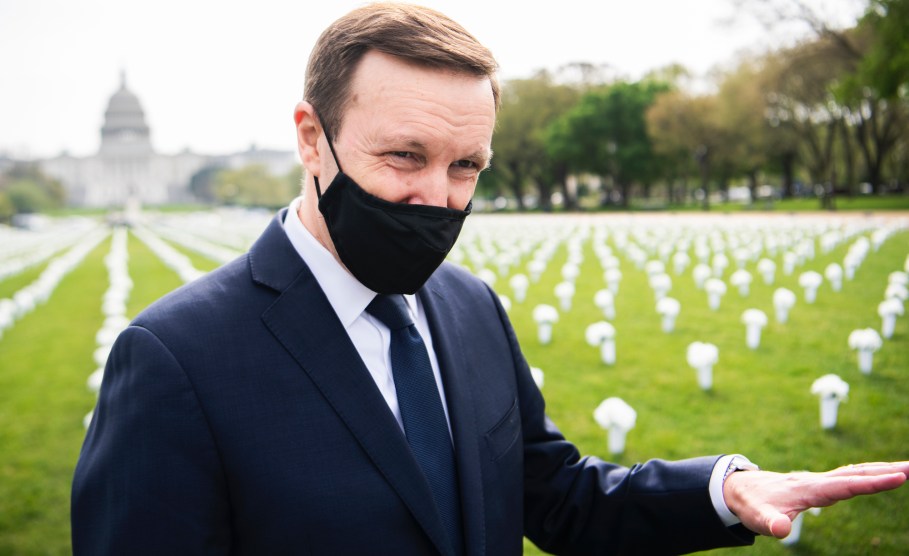 To hear Sen. Chris Murphy (D-Conn.) tell it, the hopes for Congress to pass meaningful gun legislation have simply been diminished, but are not altogether dashed. “There’s plenty of proof points to show how this issue has changed,” insists the Senate’s leading champion in the Senate for new gun measures. Democrats, once terrified to touch the subject, have wholly embraced stricter gun laws. A few Republican senators have accepted Murphy’s invitation to discuss a potential deal to expand background checks. The Connecticut senator even clings to the idea that former President Donald Trump would have reached a compromise on the issue in 2019 if his first impeachment trial had not frayed whatever meager threads tethered him to bipartisanship.

But for all that purported shift, Murphy and his colleagues in the Senate have nothing to show. Since the 2012 massacre at Sandy Hook Elementary School that forged Murphy into the Senate’s leading gun control advocate, polls consistently find that a majority of Americans support background checks for every gun sale. Activists have conceded that they’d accept nearly any deal that Republicans would agree to. Yet Congress has not passed a single meaningful gun law over the past decade.

Murphy’s discussions with Republicans have taken on Sisyphean predictability. He approaches his GOP colleagues who claim to be open to compromise—“I’m not going to let perfect be the enemy of the good,” he tells me—and the ensuing weeks or months of good faith talks result in a dramatic collapse with zero action. His latest effort came to an end last Thursday when he and Sen. John Cornyn (R-Tex.) parted ways after two months of negotiations. “We’ve hit a bit of a dead end,” Murphy said. “Maybe it’s permanent, maybe it’s not.”

Some activists privately expressed relief at the latest setback. Murphy’s latest plan aimed to modestly broaden who is required to conduct a background check before selling a weapon, a far cry from the universal background checks activists have long sought. It wasn’t even close to the compromise Sens. Joe Manchin (D-W.V.) and Pat Toomey (R-Pa.) brokered in the aftermath of the Sandy Hook—a measure that had four GOP votes but couldn’t overcome a Republican filibuster. “The only room in America where you couldn’t find 60 percent of support for that legislation was the Senate floor,” says Christian Heyne, a gun violence survivor and the vice president for policy at gun control group Brady.

The endless cycle of hope followed by inaction has some gun rights groups at their wit’s end. “Something we’ve been talking about for a long time—that has consistent, high levels of support in polls—keeps getting stuck like this,” says Chelsea Parsons, the vice president of gun violence prevention at the Center for American Progress, a liberal think tank.

There have been nearly 300 mass shootings since Democrats took control of Congress earlier this year, according to the Gun Violence Archive. The pandemic raged alongside an alarming spike of shooting deaths across communities devastated by everyday gun violence. For the better part of a decade, the gun violence prevention movement has done everything it can to encourage both parties to support their issue. They’ve swayed public opinion, flipped Congress and the White House with the promise of reforms, and even endorsed GOP candidates who supported gun laws when their party would not. They’ve given up dream legislation for the reality of whatever might pass. Yet the intransigence of Republicans persists. And increasingly, the blame is falling on the Senate rules, in which any attempts to pass a gun control bill run roughshod into the filibuster.

I’ve logged hours speaking with Murphy about guns ever since the February 2018 school shooting in Parkland, Florida that fed the fury of grassroots activists as the midterm elections approached. Murphy laid out his predictions for the post-Parkland era on a steamy New England afternoon in July of that year, as we walked together alongside a busy road in a Connecticut suburb. “If Republicans get wiped out in 2018, guns have got to be part of their post-mortem,” Murphy told me. “They will look at the swing districts they lost and see their fealty to the NRA as a major liability.” Then-Senate Majority Leader Mitch McConnell (R-Ky.), Murphy assured me, was “going to have to do an assessment of the politics on this issue.”

McConnell, of course, did not. He refused to bring the universal background check bill to a vote in the Senate after it passed the House in 2019, taking only a fleeting interest in bipartisan legislation after a spree of mass shootings in El Paso, Texas, and Dayton, Ohio that August. Murphy, meanwhile, began negotiating yet another ill-fated background checks proposal with the Trump White House, which would have expanded background checks to gun shows and internet sales without centralizing the records of said checks.

“Having Sen. Murphy reach out and work for bipartisan solutions is ultimately a good thing,” Brady’s Heyne tells me. He points to the fact that the universal background checks bill that passed the House earlier this year, just like the one that passed two years before it, earned a handful of Republican votes. “We’ll always fight for incremental progress. What’s clear is the current way that our system works, the current way that the Senate functions, the filibuster is just making it impossible for the most basic of things through.”

Murphy thinks there are Republican votes in the Senate for a background checks bill, and he’s still in talks with other GOP senators, including Toomey and Sen. Lindsey Graham (R-S.C.), on a potential compromise deal. Ultimately, he’s on the side of changing the rules, calling it “ridiculous” that a bill with broad support from the voting public can’t become law. “That’s not a functioning democracy,” Murphy declares. “You’ve got to change the rules.”