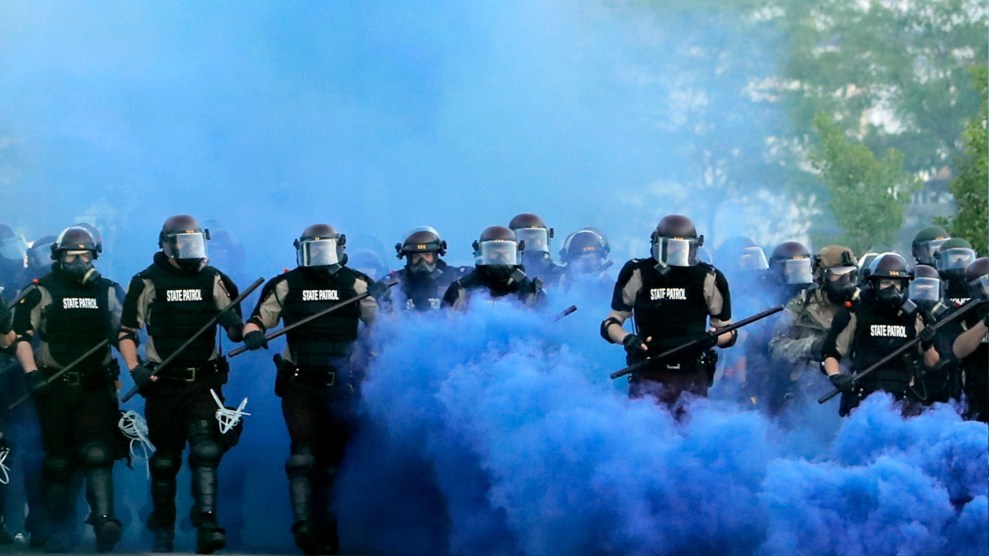 One of the biggest threats to public safety right now is the people who are charged with protecting it. As both the virus and the culture wars over how to end the pandemic rage, law enforcement officials continue to be some of the loudest voices among those determined to prolong the coronavirus emergency, all in the name of personal liberty of course.

“My body, my choice,” New Jersey police and firefighter protesters chanted earlier this month in a gross appropriation of the movement for reproductive rights. Unfortunately for those first responders, vaccination is not a personal choice. Like their counterparts in the I’m-anti-vaccine-for-political-purposes movement, police officers are framing their choice to opt out of getting vaccinated as a matter of individual freedom. Nevermind this is simply not how public health works, as this one woman who infected her 4-year-old daughter, who later died, had to find out in a very tragic way.

How can an entity that routinely tramples on other’s individual freedom now have the audacity to claim the mantle of individual liberty?

While there is no official database tracking vaccine stats for police officers, a quick look at the numbers city-by-city shows a much lower rate than the national one (76 percent of adults nationally have received one shot or more). In New York, 47 percent of cops were vaccinated, as of last month. In Los Angeles, where thousands of LA Police Department employees are seeking exemptions from the vaccine mandate, 54 percent of staff are vaccinated.

This all begs the question: How can an entity that routinely tramples on other’s individual freedom now have the audacity to claim the mantle of individual liberty?

To be clear, this isn’t even really in their self interest: In the first six months of 2021, 155 police officers have been killed in the line of duty, with 71 of those deaths related to COVID-19. It’s the profession’s leading cause of death so far this year. The end-of-year numbers will inevitably be even more grim. Despite law enforcement’s insistence that their purpose is to keep the public safe, their refusal to police individual officers has made it abundantly clear that safety is simply not a priority.

Across the country, cops have been loudly pushing back against vaccine requirements. When Chicago Mayor Lori Lightfoot announced a vaccine mandate for city employees, the Chicago Fraternal Order of Police acted accordingly. “We’re in America, goddamn it. We don’t want to be forced to do anything. Period,” FOP president John Catanzara told the Chicago Sun-Times, without a hint of irony. Don’t worry, it gets worse: “This ain’t Nazi fucking Germany, [where they say], ‘Step into the fucking showers. The pills won’t hurt you.’ What the fuck?” he continued. (Not that this really should need saying, but as a rule of thumb, you should never compare anything to the Holocaust, where approximately 6 million Jewish people were murdered. But you really, really shouldn’t compare vaccines and public health mandates designed to save lives to a literal genocide.)

Meanwhile, out west, police officers have threatened to quit over vaccines. When Portland, Oregon, Mayor Ted Wheeler issued a vaccine mandate for all city employees, the police union balked. “​​[M]any first responders are deeply opposed to vaccine mandates; so deeply that some will leave the profession before accepting a mandate,” Anil Karia, an attorney for the Portland Police Association, wrote in an email obtained by the Willamette Weekly. In San Francisco, the Deputy Sheriff’s Union vowed to quit their jobs over Mayor London Breed’s vaccine requirements. “[P]ublic safety of San Franciso has turned into the Wild West and will get worse when officers quit due to the vaccine mandate,” the organization wrote in a Facebook post laden with grammatical errors.

Even in New York City, the virus’ first hotspot, cops would rather get infected and die than get vaccinated—even when it goes against advice of the top brass. In August, the New York Police Department commissioner Dermot Shea reported that three employees had died from the virus and implored the rest of the force to get vaccinated. “Do everything you can at this time to make sure that you are protected. Get vaccinated,” he said. Since that start of the pandemic last year, 60 NYPD officers have died from the virus.

“We’re in America, goddamn it. We don’t want to be forced to do anything. Period.”

Anti-vaccine law enforcement is a risk to all of us, but more so for the people more likely to have interactions with them. The people they frequently make contact with—low-income people, the homeless community, and people of color—already have a higher risk of being infected and dying from the virus and have the least amount of access to the vaccine. Law enforcement’s refusal to act in the interest of public health could have deadly consequences for the most marginalized among us.

The full-scale revolt against vaccines is just another instance of police officers believing they’re above the rules. Even their own. After all, take a look at some of the high-profile shootings that have occurred in the last several years. Cities will ban certain chokeholds, and police officers will still use them on alleged suspects, like in the case of Eric Garner in New York. In fact, many of the new reforms introduced after the spate of police killings in 2020 are being actively ignored by police departments across the country, as Mother Jones reported earlier this year.  The list of people of color who have been stopped by or harassed by police for exercising their freedom to go shopping, ride a bike, own a gun, or drive down the street is endless. The system is simple: The arbitrary rules apply to you, but the very real rules don’t apply to police.

Recently, but especially since Derek Chauvin murdered George Floyd in Minneapolis last year, all we’ve heard from law enforcement is that cops are here to protect us. Anti-police brutality protests and movements to defund the police have been criticized for being anti-public safety. It’s the common battle cry dispensed by pro-police groups, even after violent encounters: Who but the police can keep us safe? Now, faced with a deadly pandemic that has claimed the lives of more than 666,000 people in the United States alone, countless police officers have made a decision that will clearly make more of us unsafe. It’s almost as if they never cared about public safety at all.