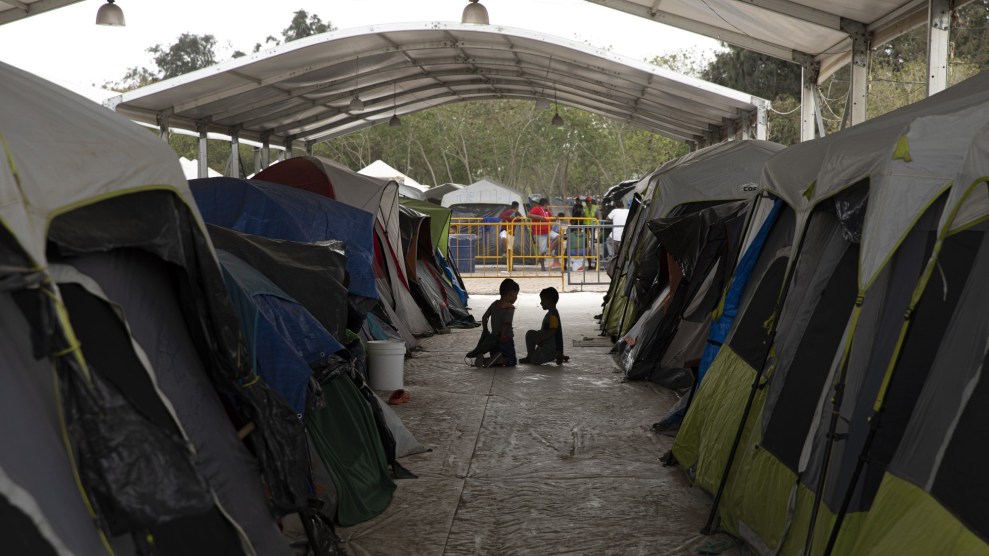 Children play between tents at a makeshift migrant camp in Matamoros.Alejandro Cegarra/Bloomberg/Getty

Under a court-mandated order, the Biden administration is gearing up to bring back a Trump-era border policy that pushed thousands of non-Mexican asylum seekers into Mexico, to wait there for their hearings in US immigration courts. The move comes after a Trump-appointed federal judge sided with the states of Texas and Missouri in a lawsuit challenging the termination of the program and ordered the administration to reinstate it “in good faith.” The government is appealing the ruling and drafting a memo to once again rescind MPP, meanwhile, it’s also hiring contractors to rebuild tent courts in Laredo and Brownsville for migrants to attend their hearings.

The Biden administration told reporters this week they anticipate the policy will be implemented in November, but that is conditional upon finalizing an agreement with Mexico. In an effort to make MPP more human, officials also stated that they hoped to make changes guaranteeing access to legal counsel and committing to completing cases within six months. But immigrant rights groups and legal experts say there’s no way to improve the policy, which has impacted more than 71,000 migrants since early January 2019. “This is a fundamentally flawed program that blocks asylum seekers from a fair day in court, contrary to America’s values and our laws.” Jennifer Whitlock, a policy counsel with the American Immigration Lawyers Association said in a statement.

Officially known as Migrant Protection Protocols (MPP), “Remain in Mexico”, as my colleague Fernanda Echavarri wrote in June, will “go down as one of the most significant policies of the Trump era, one that was monumental in shifting how the US handles asylum.” To report on the impact of MPP, Echavarri kept in touch with the Perla family from El Salvador for more than two years and chronicled their months-long saga until they were finally allowed into the country to settle in Oregon. In 2019, Juan Carlo told her:

“So, Mexico might be our only option right now,” he said, to my surprise. I asked him if he was thinking of dropping his asylum case, and he explained that the three days in border holding cells were traumatizing. That, along with the vast uncertainty of what it meant to be in MPP, made him think of giving up. This was one of the program’s goals: to strip any hope from asylum seekers so they would drop their asylum claims. Through Remain in Mexico, Trump and his senior policy adviser Stephen Miller plainly exhausted and obstructed people from seeking refuge in the United States.

“We’ve gotten the idea of going to the United States out of our minds for now,” Juan Carlos said. “The laws are all messed up in the United States, and who knows when they’ll change, so I’d rather fight for my kids here.”

On his first day in office, Biden terminated the policy, which was then officially rescinded in June buthas remained embroiled in litigation. While MPP was in effect, human rights and advocacy groups documented more than 1,500 instances of murder, rape, kidnapping, torture, and assault against migrants who had been sent back to Mexico. The Matamoros camp turned into the sight of a humanitarian crisis. Department of Homeland Security Secretary Alejandro Mayorkas denounced “individuals living in squalor who don’t have the ability to work, where the conditions are inhumane.” Legal services organizations have also reported widespread due process violations at the temporary tents that were set up as courtrooms.

Back in April, the attorney generals of Texas and Missouri, which isn’t a border state, sued the government claiming that the “arbitrary and capricious” termination of MPP had led to a “huge surge of Central American migrants, including thousands of unaccompanied minors, passing through Mexico in order to advance meritless asylum claims at the US border.” Last August, a federal court in Texas issued an injunction requiring the Biden administration to resume the policy, and the Supreme Court denied a request to block the lower court’s ruling. With the injunction in effect and pending further litigation, the Biden administration has to restart MPP to comply with the court order.

In a tweet, the organization Kids in Need of Defense condemned the revival of the policy: “There is no ‘lighter’ version of MPP. It puts children & families in the crosshairs of real threats to their safety. Forcing asylum seekers fleeing danger to wait in harm’s way is shortsighted and cruel. This decision will have disastrous effects on those seeking protection.”

The Trump Administration’s Migrant Protection Protocols force asylum seekers to wait months in Mexico rather than in the safety of the United States. This makes them targets for extortion, sex-trafficking, and kidnapping, leaving them without a safe place to live. pic.twitter.com/Q3KKpAKalj