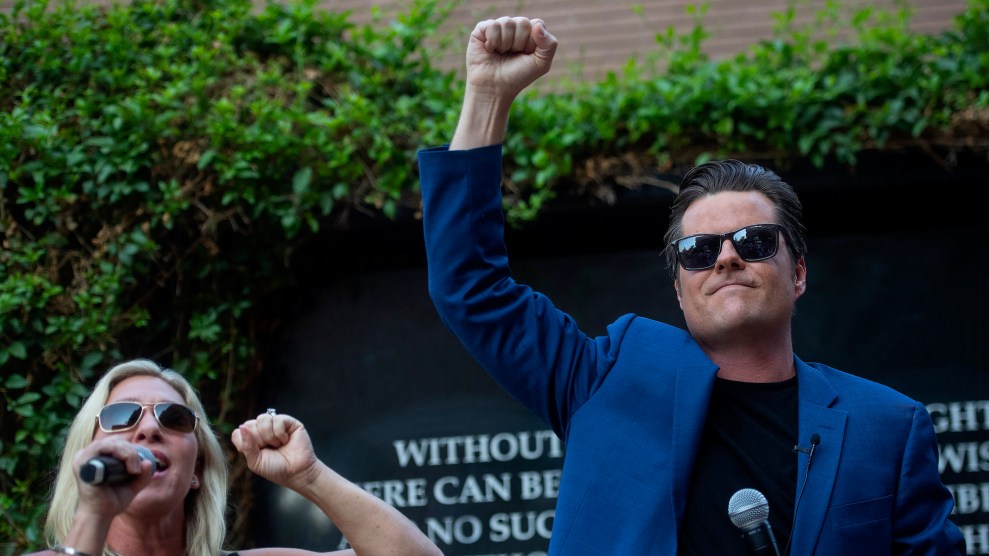 Marjorie Taylor Greene and Matt Gaetz both have a knack for ginning up outrage and stealing headlines. All this sound and fury is assumed to hoover up dollars from the riled up grassroots, but that’s not true, according to the most recent campaign finance filings.

Despite the two spending the summer barnstorming the country on a grand fundraising swing they dubbed the America First tour, (the moniker adopted after scraping the “Angl0-Saxon” caucus), neither Greene nor Gaetz lived up to expectations on the fundraising end. And, just six months after founding it, the joint fundraising committee they launched to drive their tour is nearly broke.

The joint fundraising committee launched to drive the two firebrand’s tour is nearly broke. The PAC has $13,000 in cash.

In its first few months, the Put America First PAC seemed like it was off to a hot start, raising $360,000 in its first two months—but according to new campaign finance filings made by the PAC it now has just $13,000 in cash. Multiple tour stops were canceled this summer. Gaetz and Greene did hold at least one major event in Iowa in August. Despite attracting big headlines, the rally was, apparently, a financial bust. The group spent $159,000 from July 1 to September 30, and raised just $57,000.

On their own, the two firebrands have their own fundraising problems as well.

While Greene is definitely more successful—in her short congressional career she’s raised more than $8.8 million—the most recent numbers filed by her own campaign show her fundraising totals are increasingly eaten up by the costs of chasing donors and paying off the operatives and professional fundraising consultants and vendors that she hires.

In February, just weeks into her new job as a member of Congress, Greene was stripped of her committee duties for her history of outrageous statements. She spouted QAnon conspiracy theories and encouraged violence against Democrats. Let’s not even get into the “Jewish space laser.” But instead of being cowed, Greene bragged about how much money she was raising. In the first three months of this year, she did raise $3.2 million. But the next three months she raised just $1.5 million. And from July 1 through the end of September, Greene again raised $1.5 million.

That’s not too shabby of a number, but fundraising costs are taking up an increasing percentage of her campaign’s fundraising totals. In the first three months of the year, when she was riding high on the publicity of being scorned by her new colleagues in Congress, her campaign spent about 43 percent of what it fundraised. In the next three months, that number increased to 59 percent. And for the past three months, the figure jumped again to 70 percent. She spent more than $1 million to haul in $1.5 million.

Greene continues to appeal to small donors—those who give less than $200—who still provided 76.6 percent of her money in the third quarter. But more than a quarter million of that money raised from the grassroots went into the pocket of a political consultancy registered to a man named Isaiah Wartman, who was named as Greene’s campaign manager during her run last year. Greene also spent hundreds of thousands on direct mail, printing, postage, and the cost of renting lists of donor names to solicit.

Greene’s partner Gaetz has, of course, had a string of his own personal problems—including being the target of a Department of Justice investigation over his role in an alleged sex trafficking operation. All that has apparently affected his fundraising ability. If fundraising costs are slowly eating up more and more of Greene’s take, they have completely sunk Gaetz’s.

Like Greene, Gaetz had a strong start to the year, raising $1.8 million in the first quarter. After word of the investigation hit in April, his fundraising slowed. It dropped to just $1.4 million. Unlike the first quarter—when he was able to make more money than he spent on fundraising—the second quarter saw his campaign spend about half a million dollars more than it raised.

The Gaetz campaign’s latest filing shows that his fundraising has all but dried up. He raised just $527,000 from July 1 to September 30. He spent far more—$627,000—trying to raise that money. In another parallel to Greene, Gaetz’s biggest expenses are direct mail and paying fundraising consulting costs to his vendors. In fact, those two things ate up more than 60 percent of his donations.

Oddly, for a campaign that seems to be burning through its cash, Gaetz’s campaign spent lavishly on stays at hotels and resorts across the country.

Oddly, for a campaign that seems to be burning through its cash, Gaetz’s campaign spent lavishly on stays at hotels and resorts across the country. In total, the campaign spent $29,867 on lodging over July, August and September, including $2,300 in early July at the Edgewater Beach Hotel in Naples, Florida; $2,100 on an ultra-luxury hotel in downtown Portland, Oregon, in early September; and almost $1,500 on a Kimpton hotel in Cambridge, Massachusetts in August.

Gaetz’s campaign barely spent at all in recent months at Gaetz’s previous favorite chain of hotels and resorts: those belonging to former president Donald Trump. In April, CNN reported that Gaetz was denied a meeting with Trump at the Mar-a-Lago resort following news of the DOJ investigation. Gaetz dismissed that report but despite Gaetz’s continued appreciation for staying at fancy resorts on his campaign’s dime, he has not been the Trump customer he once was. After spending more than $8,600 staying and dining at Trump properties during the last election—and seemingly doing everything he could to advertise his loyalty as a customer and political ally—Gaetz’s campaign spent just $600 at Trump properties over the summer, listing a lone meal expense on July 8.