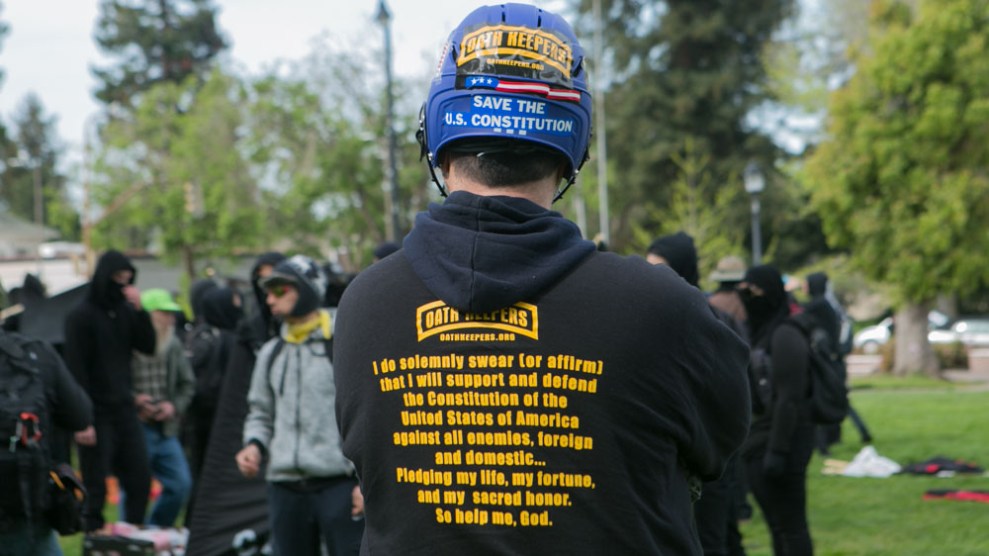 How does one come to join a militia? When members of right-wing paramilitary groups explain their motivations to the public, they usually give a set of similar, flattering answers—to protect the constitution, to preserve freedom, or defend their community. But a leaked spreadsheet of Oath Keeper members obtained by Mother Jones sheds some light on what they say when they’re just talking to each other.

“I was rejected by the Army.”

The document contains details on 25,000 people who joined the organization between 2009 and 2015, including their location, contact information and 18,000 self-submitted entries reflecting how they learned of the group or decided to join. Oath Keepers was founded in 2009, just after Obama took office, by Stewart Rhodes, who touts an organizational commitment to protecting the constitution. The Oath Keepers are a conspiratorially minded militia who work in the service of right-wing politics. Members of the group brought rifles to the Washington area ahead of January 6, when Congress met to formalize President Joe Biden’s election victory. Sixteen members and associates of the group face felony conspiracy charges linked to attempts to halt that day’s proceedings.

Some of the explanations offered in the database are absurd: “Old man in Jarome, AZ at a little bar rocking some reggae,” reads one. Others are concerning: “An ICE agent,” another says. Some are both: “Funny story, I stopped a speeding truck driver, who had your decal on the side of his truck, I asked about it, he went on and on, I said, Damn I’m all about this. looked up online and here I am. I’m a poor broke cop. But, I’m TRUE BLUE/ AMERICAN,” reads an accounting from an Illinois-based police officer.

The most frequently cited means of discovering the Oath Keepers is Facebook, with variants of the platform’s name mentioned in almost 1,000 entries. YouTube and related terms were cited roughly 800 times. The entries usually don’t provide details about what content served by the platforms motivated the signups.

To Jared Holt, who tracks far-right activity online as a research fellow at the Atlantic Council’s Digital Forensic Research Lab, the platforms’ major role in the database makes sense.

“Far-right movements saw social media around the turn of the decade as a potentially liberating and unmitigated resource for them to bypass traditional ways of getting publicity for themselves or reaching people who might want to join their movements,” he said, responding to Facebook’s prominence on the list. “It wasn’t until the last five years that attitudes in these movements soured on social media companies, prompted by social media companies taking actions on their platforms.”

While the platform’s big numbers could be read as an indictment of those companies and an illustration of the role that they played in radicalizing people over the period of time captured in the database, it could simply be a reflection of their prominent role in the flow of information.

Many joiners cited right wing media outlets and figures, including Infowars and its founder Alex Jones, which are mentioned over 900 times. (Holt points out that Rhodes has made frequent appearances on Jones’s show, and that both men’s followers are prone to conspiratorial thinking.) Fox and Fox News show up 526 times. Glenn Beck and Bill O’Reilly are each mentioned almost 300 times. The document shows how mainstream or even critical media coverage of the movement has aided recruitment, with MSNBC and CNN cited 12 and 35 times, respectively. At least 33 people said they learned about the Oath Keepers from Mother Jones.

The data also illustrates longstanding cross-pollination between the militia and prepper communities. Rhodes has pandered to survivalists, according to the Anti-Defamation League, calling them awake and aware, and claiming their self-reliance makes them a threat to the government. Nearly 130 people mentioned coming to the Oath Keepers through the Survivalist Prepper podcast, where Rhodes made two 2011 appearances. Another 40 cited 299 Days, a series of novels about preppers surviving an end-times scenario where Oath Keepers are imagined to play a key role. Another 50 mentioned finding the group through various websites, magazines, conventions, and other venues related to the prepper movement.

Last month, the whistleblower group Distributed Denial of Secrets released a separate but partially overlapping spreadsheet documenting Oath Keeper sign ups between 2011 and 2018. While that list, recently provided to Mother Jones and other outlets, shares large parts of data recorded in the spreadsheet running through 2015, it is missing the explanations for how members learned of the group.

Beyond media, the most common entry points in the spreadsheet separately obtained by Mother Jones were coworkers, friends and family, and in-person events. The word “officer” shows up in more than 200 explanations, usually in front of the name of a new member’s coworker, or of a police officer they claim a personal relationship with. That lines up with reporting about Oath Keepers’ deep entrenchment in law enforcement agencies.

Among in person events, gun shows were popular, with 182 mentions. “Gun shows were the bread and butter of militia for a long time,” Holt says. “The [Oklahoma City] bomber got into the militia movement that way.” Right-wing political rallies and marches were also major on-ramps with over 300 mentions. Tea Party-related activity, including both online communication and in person events, was mentioned 500 times—further evidence that the anti-tax and -spending movement was a breeding ground for aggressive and extreme politics.

While most of the entries betray little about individuals’ deeper motivation for joining a militia, one frequently offered explanation is having a desire to serve in the military, but being excluded from doing so.

“I was rejected by the Army for a heart murmur but I wanted to serve my state and country,” one member explained. Many others were former military, who left because of age or service injuries. “Active Army, currently NJ Army National Guard. Sustained a minor [tramautic brain injury] in Afghanistan and possibly blacklisted due to PTSD diagnosis,” another explains. The words “disability” or “disabled” are mentioned around 450 times in the document.

“I think there’s a lot of people out there like that, who won’t qualify [for the military], but who really want to do it,” says a former Oath Keeper, who asked to remain anonymous for his safety. “They’re going to go do it on their own.” He explains that part of the Oath Keepers’ attraction to disabled veterans like himself is that it offers a way to serve beyond their time in the military, in the absence of other “boots on the ground fraternal organizations” that might provide outlets to carry out a drive to be “guardians and warriors.”

University of Albany professor Sam Jackson, who published a 2020 book on the group, agrees this is a common pathway. “Some see it as a see it as a way to serve their country, which is part of what Oath Keepers recruit on,” he says. “For some, it’s a way to see friends. It can be like a VFW Hall.”

But Jackson warns members can have darker, undisclosed reasons to join: “For others who are motivated by racial animus, the Oath Keepers can be an outlet to express that through too.”