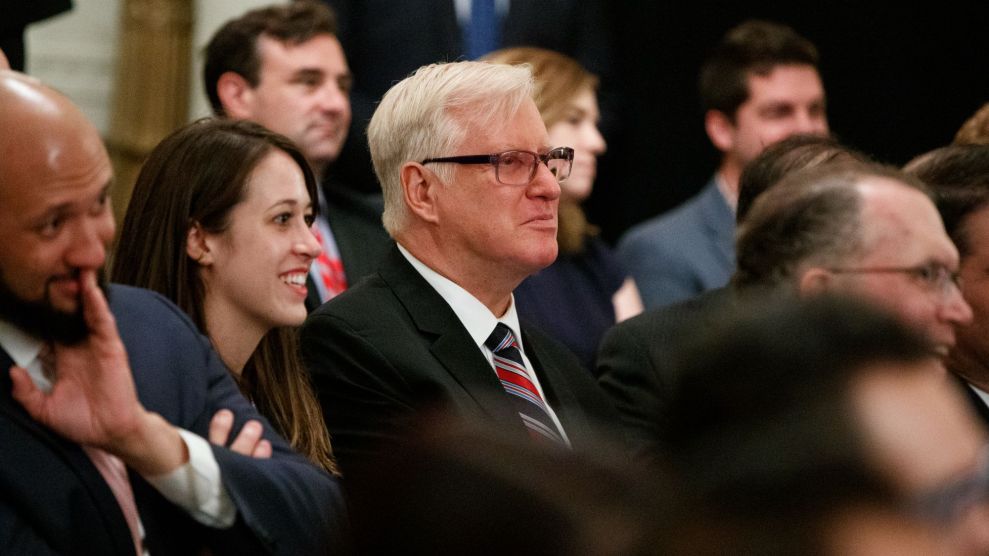 Jim Hoft, publisher of the Gateway Pundit, listens as President Donald Trump speaks during the "Presidential Social Media Summit" in the East Room of the White House, Thursday, July 11, 2019, in Washington.Evan Vucci/AP

In the aftermath of the 2020 election, the Gateway Pundit—one of the country’s leading sources of pro-Trump misinformation—helped instigate a vicious harassment campaign against two Black Georgia election workers, according to a new lawsuit. As Republicans desperately tried to cast doubt on Joe Biden’s victory, the two women—Ruby Freeman and her daughter Wandrea “Shaye” Moss—were reportedly stalked by strangers, doxxed, inundated with death threats and racist taunts, and driven from their homes.

Now, Freeman and Moss are fighting back in court. On Tuesday, they filed a defamation suit against the Gateway Pundit, its founding editor Jim Hoft, and contributor Joe Hoft, accusing them of spreading “false and endlessly repeated accusations” about the women’s conduct on election night. The two women seek “compensatory and punitive damages” from the defendants, the removal of the inaccurate articles accusing them of election fraud, and an acknowledgement that the site’s coverage was false.

The two women are being represented by Protect Democracy, a legal organization created to combat Donald Trump; the Yale Law School Media Freedom and Information Access Clinic; and several firms.

The alleged harassment followed a December 2020 hearing before Georgia lawmakers, when a Trump campaign attorney named Jacki Pick falsely claimed that a surveillance video from a ballot-processing room in Atlanta showed Fulton County election workers pulling suitcases of “illegal” ballots from under a table. The Gateway Pundit quickly identified the two workers as Moss and Freeman and, according to the New York Times, published dozens of false stories about them, calling them “crooked Democrats” and claiming that they “pulled out suitcases full of ballots and began counting those ballots without election monitors in the room.”

The claims were swiftly debunked by both Georgia’s secretary of state and the Georgia Bureau of Investigation, which concluded that the “suitcases” were standard ballot containers with legitimate votes and that Freeman and Moss were simply doing their jobs.

But Donald Trump, his surrogates, and the far-right media ecosystem continued to spread falsehoods about them over the next few months. On December 10, 2020, Trump lawyer Rudy Giuliani appeared at another hearing with Georgia lawmakers, where he repeatedly identified Moss and Freeman by name and labeled them “crooks.” On December 22, Trump tweeted out a One America News Network segment featuring the Gateway Pundit’s “investigation” into the two women. And on January 2, 2021, during his infamous phone call with Brad Raffensberger, Georgia’s secretary of state, Trump called Freeman a “professional vote scammer and hustler” who had pulled out suitcases “stuffed with votes” and scanned each ballot “three times.” The Gateway Pundit itself continued to publish stories about the women through November 2021.

For Moss and Freeman, the fallout was devastating. After retiring from her job as an emergency call coordinator, Freeman had started a small boutique that sold fashion accessories online, but she was forced to shutter that business when her social media accounts were flooded with threats and racist messages.

According to a Reuters investigation that detailed the harassment, Freeman’s home address was posted on social media platforms, and Trump supporters publicly called for her execution. Strangers camped outside Freeman’s home and ordered pizza for delivery to lure her outside. Photos of Moss’ car and license plate were posted online. On two occasions, Moss told NPR, strangers attempted to force their way into her grandmother’s house—where Freeman used to live—and make a “citizen’s arrest.” One particularly graphic comment underneath a Gateway Pundit article called for the two Black women to be “strung up from the nearest lamppost and set on fire.”

The two women didn’t have enough money to hire private security, as the Fulton County police chief suggested, and Freeman was eventually forced to go into hiding. Reuters reported that she moved between Airbnbs and that she had stopped using credit cards for fear of revealing her location.

According to the complaint, Freeman now grows terrified when she hears her name called in public, and Moss gets her groceries delivered because she’s afraid of being recognized at the store. Both women are afraid to live normal lives.

“I couldn’t have imagined the lies that The Gateway Pundit would tell about me, pushing people to harass me and my family and to threaten us with violence,” Freeman said in a statement. “I want the defendants to know that my daughter and I are real people who deserve justice, and I never want them to do this to anyone else.”

Shortly after news broke, Jim Hoft posted a fundraising plea on the Gateway Pundit, asking readers to help them fight the lawsuit. His article doubled down on the smears of Freeman and Moss.

At the time of this publication, three hours after their fundraising plea was posted, it had already raised roughly $27,000.