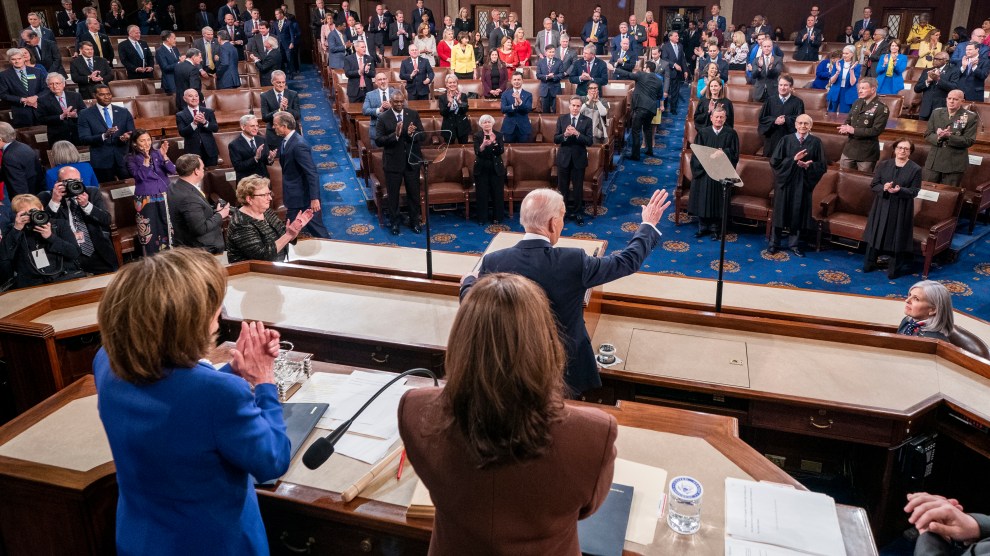 As I described earlier this evening, the first section of President Joe Biden’s speech tonight, in which he forcefully rebuked Vladimir Putin, generated some bipartisan support from a bitterly divided Congress. But as Biden moved to his domestic agenda, the chamber’s unusual unity began to splinter, sparking the kinds of raucous murmurings that are now familiar from our divided government.

Let’s quickly recap the economic and social priorities Biden laid out in his first State of the Union.

After suggesting a 15 percent minimum tax rate for corporations, to grumblings from Republicans, Biden called on Congress to raise the minimum wage to $15 an hour—which it failed to do as part of the Covid relief package passed last year. In the same breath, he issued a call to extend the Child Tax Credit, garnering applause from most Democrats, but not from Sen. Joe Manchin (D-W.V.), who has long refused to support the poverty-relieving measure without a work requirement. Manchin, who has been rumored to have considered leaving the Democratic Party, notably sat in the Republican section of the chamber, near moderate Sens. Mitt Romney (R-Utah) and Susan Collins (R-Maine).

Biden did not dedicate more than a few sentences to the push for voting rights, which animated Congress earlier this year but failed to gain traction in the Senate when Republicans and two Democrats voted against the Senate rules reform that would have made passage of the Freedom to Vote Act or the John Lewis Voting Rights Act feasible. Instead, he focused on (ostensibly) less polarizing issues: beating the opioid epidemic; addressing mental health; supporting veterans, including by expanding health benefits to those suffering from nine respiratory cancers; and increasing congressional funding for cancer research.

Even as he called the House chamber a “sacred space,” Biden refrained from mentioning the January 6 attack on Congress by Trump supporters. “As hard as these times have been, I am more optimistic about America today than I have been my whole life,” he said, “because I see the future that is within our grasp. Because I know there is simply nothing beyond our capacity.”

But the lasting image of the night might very well be this Reuters photo of Republican lawmakers, Reps. Lauren Boebert (Colo.) and Marjorie Taylor Greene (Ga.), yelling at the president—highlighting just how fleeting moments of national unity have become.

#SOTU22 was not without its partisan moments. Two far-right Republican lawmakers, Lauren Boebert and Marjorie Taylor Greene, shouted ‘build the wall’ in response to immigration policy. ‘Sit down,’ a Democratic lawmaker shouted back https://t.co/Dt7Xatt7Qd pic.twitter.com/EDQA4xLAoY