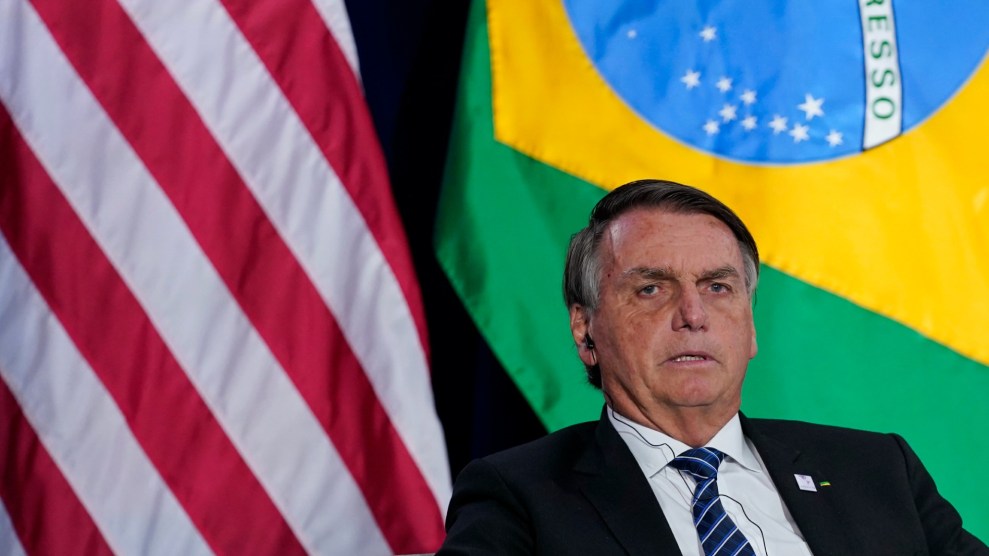 Brazilian President Jair Bolsonaro speaks during the Summit of the Americas.Evan Vucci/AP

On the day the US Supreme Court overturned Roe v. Wade and did away with the 1973 precedent establishing the constitutional right to an abortion, the far-right Brazilian government of Jair Bolsonaro published an official statement in English: “Brazil defends life from its conception and strengthens family ties.” In some ways, this assertion was not surprising. In 2020, Brazil joined more than 30 countries—including Poland, Hungary, and Saudi Arabia—and signed the “Geneva Consensus Declaration on Promoting Women’s Health and Strengthening the Family.” This was an anti-abortion initiative that had been initiated by the Trump administration, but, to the discontent of several Republican senators, from which President Joe Biden has since withdrawn. “The United States, along with our like-minded partners,” the declaration stated, “believes strongly that there is no international right to abortion.”

With the recent Supreme Court decision jettisoning the constitutional right to an abortion, the United States has now joined a small group of countries that have rolled back abortion rights in recent decades. Aside from representing a big win for the global conservative right’s anti-reproductive rights agenda, international advocacy groups fear the ruling could have a ripple effect of galvanizing anti-abortion efforts abroad. These efforts—largely funded by US religious groups that have long pushed their interests in Latin America, Africa, and Europe—further stigmatize abortion and threaten to slow down or reverse hard-fought progress in places that have expanded rights, while also advocating for even tighter restrictions where access is already limited.

In this context, Brazil can serve as a prime example. As Debora Diniz, a law professor at the University of Brasilia and leading expert on reproductive rights, noted in an interview with Brazilian magazine Veja, “For countries like Brazil, which are having intense discussions about abortion, this chapter of American jurisprudence becomes an issue we have to face.”

“For countries like Brazil, which are having intense discussions about abortion, this chapter of American jurisprudence becomes an issue we have to face.”

One of Bolsonaro’s cabinet leaders, Secretary of State for Family Affairs Angela Gandra, signed an amicus curiae in the Dobbs v. Jackson case supporting Mississippi’s interest in limiting abortion. She was joined by a number of international jurists, several of whom are from Brazil. When the decision was announced and removed the precedent of Roe, Damares Alves, the former minister of the Women, Family, and Human Rights ministry created by Bolsonaro, celebrated and described it as a “day of victory of life,” inaugurating a trend around the world. “The man is discovering that abortion is the murder of babies while they are sleeping in their mother’s womb,” she Tweeted. Bolsonaro’s son Eduardo, who has close ties to the MAGA movement, also praised the conservative supermajority court put in place by Trump and alluded to the fact that, if reelected in the upcoming October presidential elections, his father would nominate two conservative justices to the country’s Supreme Court.

While other nations in Latin America such as Argentina, Mexico, and Colombia have successfully propelled the “green wave” movement to legalize abortion, Brazil still criminalizes the procedure, although there are a few exceptions: in cases of rape, risk to the pregnant person’s life, or fetal malformation. Unsafe abortions constitute one of the main causes of maternal mortality in the country and access to legal abortions remains uncertain. There was no more vivid example of this than a case that sparked outcry across Brazil and became international news the same week as the death of Roe.

A judge in Brazil has refused to let an 11-year-old rape victim have an abortion — and ordered the girl to be detained to prevent her from trying to get one.

This is the kind of rights-abusing madness the US can look forward to… https://t.co/zIedTBU39k

As reported by The Intercept Brasil, a judge in southern Brazil tried to prevent an 11-year-old who became pregnant after being raped from accessing a legal abortion by keeping her in a shelter for over a month and repeatedly attempting to pressure her into carrying out the pregnancy. “Do you want to choose the baby’s name? Would the baby’s father agree to give it up for adoption? Would you bear it [the pregnancy] a little longer?” the judge asked the girl during a hearing. The child was eventuallyauthorized to undergo the procedure—at 29 weeks—following a recommendation by federal prosecutors.

“We don’t discuss the way it was conceived, whether the law allows it or not,” Bolsonaro, who previously said abortion would never be “approved” in Brazil if it were up to him, wrote on Twitter. “It is inadmissible taking the life of this defenseless being!”

His administration is holding a public hearing this week on the issue of abortion with the explicit goal of making it harder for pregnant people to access services. The guidelines document—which wrongfully states that there’s no legal abortion in Brazil—has drawn criticism from public health experts and medical associations for its flawed scientific and legal arguments. Among the witnesses the government invited to speak at the public hearing on this proposal? The same judge who tried to block the 11-year-old girl from getting a legal abortion, and Valerie Huber, a special representative for Global Women’s Health under Trump’s Department of Health and Human Services and architect of the Geneva Consensus Declaration.