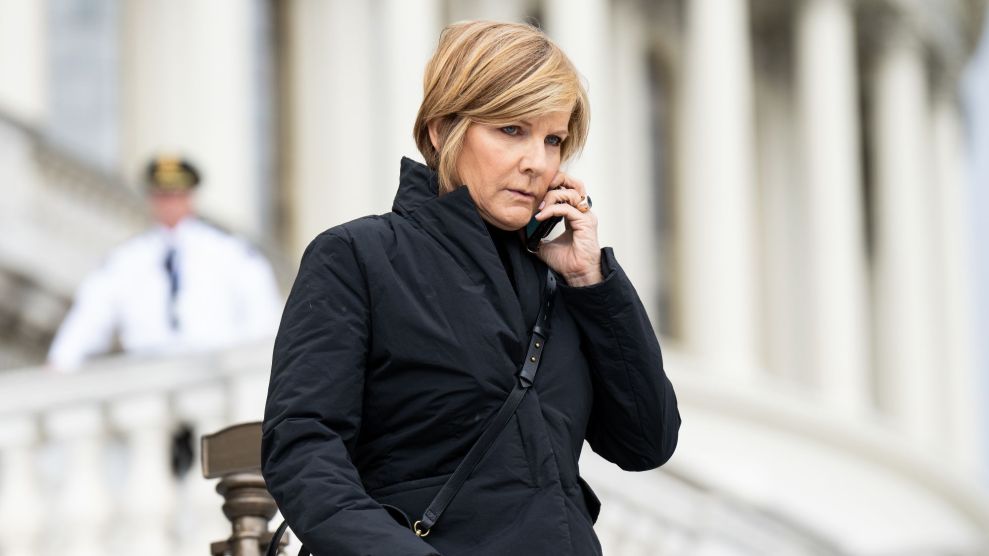 As a member of Congress from the nation’s driest state, Rep. Susie Lee has a major stake in the health of the Colorado River Basin, which is currently enduring historic drought. “Nevadans’ access to clean water from Lake Mead is in danger,” she tweeted in July 2021. In office, Lee has pushed for federal funding for an array of “common-sense solutions” to the crisis—including water recycling, a process that allows waste water to be filtered and either returned to the environment or reused for other purposes. Last year, she authored a measure that will make hundreds of millions of dollars available for water recycling projects.

But Lee’s interest in this issue appears to be more than simply political. The two-term Democrat also has a portion of her considerable personal wealth invested in a company that stands to benefit from the water recycling legislation she has championed. In March 2020, according to congressional financial disclosures, Lee and her husband—a casino executive—purchased between $1,001 and $15,000 worth of shares in Evoqua Water Technologies, a company that, among other things, contracts with federal and local governments to provide filtration systems and other technologies used in water recycling.

“Representative Lee’s stock trades certainly would lead a reasonable person to question why they were made.”

There’s no evidence that Rep. Lee intended to personally profit from her water legislation; a spokesperson for the congresswoman says the trades were conducted by a money manager without any input from Lee. But the transactions are still troubling, a congressional ethics expert told Mother Jones. “Representative Lee’s stock trades certainly would lead a reasonable person to question why they were made,” says Donald Sherman, the senior vice president and chief counsel at the liberal-leaning Citizens for Responsibility and Ethics in Washington, which has campaigned for a ban on congressional stock trading.

“The point,” Sherman says, “is that we don’t want to have to ask these questions.”

Evoqua is far from the only company Lee has invested in since entering Congress in 2019. She and her husband—who are now in the process of divorcing—have publicly disclosed hundreds of purchases and sales of stock and have a net worth in the millions of dollars. (Members of Congress are required by law to make such disclosures.) Many of those transactions, including the Evoqua purchases, were done through a trust called the DSL Living Trust.

In a statement, Lee’s spokesperson, Zoe Sheppard, said that Lee did not direct those trades. “Congresswoman Lee is not involved in the trading decisions of the DSL Trust, and this is a joint account with her husband from whom she has filed for divorce,” Sheppard said. “These trades were executed by a third party money manager with no input whatsoever from the Congresswoman.” Sheppard also shared a copy of a letter from an investment adviser stating that “Representative Lee and/or her spouse are not involved in the day-to-day management of their account.” The letter was dated September 29, 2020, after Lee’s first Evoqua stock purchase but before her second and third purchases.

The trust, however, is not a blind trust, meaning that Rep. Lee can see the contents of her investments. According to Sherman, that type of arrangement can pose a problem, since it allows lawmakers to know how legislation might impact the value of their trades. “Members should be banned not just from directing trades, but from having anyone trade on their account—unless the trades are made by the trustee of a truly blind trust,” he says.

Congressional stock trading has come under increased scrutiny in recent years—particularly since the start of the Covid pandemic, when several lawmakers were accused of using their knowledge of the impending public health disaster to make financially beneficial trades. Lee got caught up in that controversy too; in 2020, the Las Vegas Review Journal reported that she had made several advantageous trades near the beginning of the pandemic, such as buying a grocery stock. At the time, a spokesperson told the paper that Lee “did not direct any stock trades during the week of Jan. 29, when the House received an unclassified briefing on COVID-19” and that “any trades done that week were executed by a third-party money manager with no input whatsoever from the Congresswoman.”

After gaining some initial momentum, legislation that would limit members’ ability to buy and sell individual stocks has stalled in Congress.

In a statement provided to Mother Jones, Lee said that she supported a ban on members “directing trades of individual stocks.” But she stopped short of backing the proposal that Sherman supports: an outright ban on lawmakers owning individual stocks unless they are held in a completely blind trust.

“The only way to fully deal with all the problems associated with members owning or trading individual stocks is through divestment,” says Sherman.

As Lee’s investments in Evoqua deepened, so too did her official support for water recycling. In June 2021—after the Lees’ second investment in the company but before their third—Rep. Lee introduced legislation that would significantly expand federal funding for water recycling projects.

Previously, the only federal program dedicated to funding water recycling schemes was the bureau of reclamation’s Title XVI program, which provides money for the planning, design, and construction of such projects. This funding source was tiny: In 2021 the bureau only gave out $9.5 million in Title XVI money, and in 2020 the bureau gave out just $16.6 million. With water recycling becoming a policy priority—the EPA says that as the climate changes, recycling “provides an alternative source of water that can be more reliable than traditional raw water sources”—the lack of funding could pose a serious bottleneck. The WaterReuse Association, a trade group representing the industry, estimated that demand for Title XVI money outstripped supply by more than $700 million.

Lee’s legislation was designed to close the gap by allocating $750 million to a new federal grant program that would subsidize portions of large-scale water recycling projects. Unlike Title XVI grants, which could only provide significant support to relatively small projects, Lee’s program would be reserved for large water recycling projects that cost more than $500 million. “Wastewater recycling is the type of innovation that we need to tackle this crisis, and it’s going to take a major investment,” Lee said in a press release announcing the legislation.

A version of Lee’s bill was ultimately incorporated into the bipartisan infrastructure bill, which passed in November 2021. The final package dramatically increased funding for water recycling, allocating $450 million for Lee’s new competitive grant program for large projects, as well as $550 million in additional funding for the already existing Title XVI grant program.

“I’m so proud that my bill, the Large-Scale Water Recycling Project Investment Act, has made it into the bipartisan infrastructure legislation that I’ve worked on for months,” Lee said in August 2021. “This bill will pave the way for increased investment in such regional water recycling projects that will create reliable, virtually drought-proof water supplies.”

“The point is that we don’t want to have to ask these questions.”

Evoqua could benefit from Lee’s legislation. The company’s business model, according to its SEC filings, includes “tailored services and solutions” related to the “recycle / reuse” of water. In November 2021, it announced new environmental and sustainability goals, which included making water reuse and water recycling a greater part of its strategy going forward. In the third quarter of 2021, Evoqua lobbied lawmakers on the infrastructure bill and on “water re-use and other remediation issues,” according to federal disclosures.

Evoqua’s lobbying efforts included a conversation with a representative from Lee’s office. “Our legislative staffer who covered water issues met with a representative from Evoqua last year,” said Sheppard. “This staffer met with dozens of groups with interests in water policy, as part of her regular job duties.” She added that Lee “was not made aware of this meeting as it was a routine meeting.” Evoqua’s director of corporate communications, Sarah Brown, said that the company “educates many stakeholders, including congressional members, in order to make decisions on a wide range of issues,” but she declined to comment further.

Beginning in February 2018, Evoqua was a partner in a pilot version the Central Coast Blue project in Southern California, which aims to purify waste water and then inject that water into the region’s groundwater basin, where it will help prevent saltwater intrusion into the water supply. The Central Coast Blue project is one of just 64 projects eligible for Title XVI funding through the Bureau of Reclamation. The project applied for a Title XVI grant in March, said Jorge Garcia, the assistant city manager of Pismo Beach; the results of the grant competition have not yet been announced. (The Central Coast Blue Project is estimated to cost $85.3 million, which is well under the $500 million minimum for large-scale projects supported by Lee’s legislation.)

Whether water recycling projects are, on average, an efficient use of taxpayer money is a matter of some dispute. Greg Fogel, the director of government affairs and policy at WateReuse, points out that water recycling is an established technology that can be used to accomplish a wide array of environmental goals or meet demand for water. It’s also embraced by Nevada water officials.

But not everyone is completely sold. “Water recycling can be an effective, targeted solution,” says Colin Strong of the World Resources Institute. However, “frequently more cost-effective or nature-based solutions could deliver the same results. Water recycling is one of the more expensive and technically demanding solutions and should only be considered as one tool within a larger toolbox.”

For her part, Lee remains an enthusiastic booster of water recycling.

“I have no idea what her intentions are,” says Sherman. “This could be a coincidence. But certainly a cynical person might ask whether she’s making decisions in her government job that are consistent with and potentially to the benefit [of] her financial interests.”

“These questions will keep coming until Congress takes action to ban all members from buying and owning individual stocks,” Sherman adds. “This is a death by 1,000 cuts for the institution.”