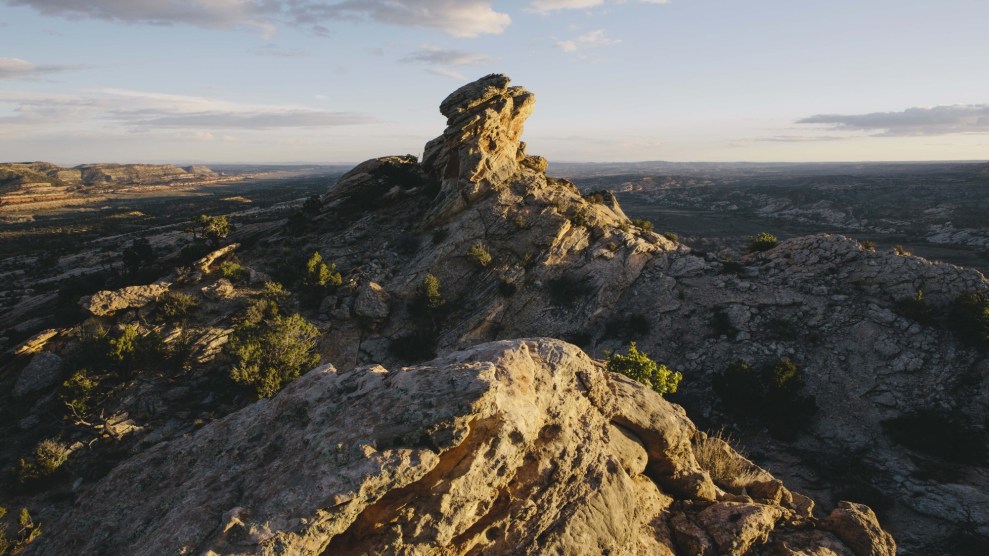 In June, federal and tribal officials signed an intergovernmental cooperative management agreement for Bears Ears National Monument in southeastern Utah. It followed a historic congressional hearing during which tribal leaders spoke to the House Natural Resources Committee about the potential value of Native co-management of federal lands.

Under the new agreement, the Bears Ears Commission, which is composed of five tribes—the Ute Mountain Ute Tribe, Navajo Nation, Hopi Tribe, Pueblo of Zuni, and Ute Indian Tribe of the Uintah and Ouray Reservation—will work with the Bureau of Land Management and the U.S. Forest Service “to provide consistent, effective, and collaborative management of the lands and resources” by “coordinating on land use planning and implementation, as well as the development of long-term resource management and programmatic goals.”

The agreement is an important step, but it is not without precedent: Four national parks are already co-managed by tribal nations—inspired in at least one instance by the success of Uluru-Kata Tjutu, which is co-managed by the Australian government and the land’s rightful Indigenous owners. Around 80 other agreements support collaborative relationships between the National Park Service and U.S. tribes. These have all served as test cases for Bears Ears, which could now become the touchstone for a more expansive network of co-management agreements between tribes and the federal government.

High Country News asked four Native leaders who have spent years fighting for Bears Ears what this co-management agreement might mean for the future.

These conversations have been condensed for length and clarity.

HCN: If successful, this agreement could potentially expand either within Bears Ears or to other federal lands. What will successful co-management look like?

Mark Maryboy (Diné and Paiute; co-founder and former board member of Utah Diné Bikéyah; former Navajo Nation tribal council member; San Juan County, Utah’s first Native commissioner): I wish I had a crystal ball to say it’s going to work, and this is how it’s going to be. This is brand-new, never been done before with tribes, specifically in southeastern Utah. So that’s something we’re just going to have to work with and see how it turns out.

Cynthia Wilson (Diné; founder and former director of the traditional foods program at Utah Diné Bikéyah; co-founder of Women of Bears Ears; Harvard Divinity School’s Native and Indigenous Rights Fellow): A successful co-management model is all about transparency, and having a consensus in sharing of ideas and ways of knowing. We are taught to take care of the land. It’s more of an act of love, not an act of a job.

Regina Lopez-Whiteskunk (Ute Mountain Ute; cross-cultural manager at Montezuma Land Conservancy; former co-chair of the Bears Ears Coalition; former head councilwoman of the Ute Mountain Ute Tribe): First and foremost is the communication efforts between tribes and agencies. When it comes down to a lot of the Indigenous knowledge, we don’t have it documented in acceptable forms. It’s also very important to understand the Indigenous cultures of relationship building. That could be as simple as having a cup of coffee and getting to know each other, and finding out what ties to the land and what stories are embedded in a lot of that knowledge.

Carleton Bowekaty (Lieutenant governor of the Zuni Tribe; one of seven signatories on the Bears Ears co-management agreement): Essentially, co-management is recognizing that there’s value to both aspects and that ideally, moving forward, those can be respected by both agencies and by the tribes, and ideally provide for a great place to visit for the general public.

Maryboy: There is a threat of losing our culture and language, and the co-management would allow tribes to continue to practice their language, which would be promoted in the schools. Bears Ears has a lot of tribal involvement. It promotes culture and it promotes language.

Wilson: Bears Ears is unique in how it’s formally known as a peacemaking place among tribes. Because each tribe has lived there and migrated through there since time immemorial, and each tribe left their history within that landscape, it’s going to provide an educational tool to other tribes.

Lopez-Whiteskunk: For many generations and centuries, we have been just fixated on, “At what point do we jump in and when does action begin to occur?” and completely jump past the relationship building, which truly is the centerpiece to all of this. In order for us to reach a point of healing, we have to know one another. We have to be able to see that we all have commonalities as human beings. We don’t have time to fight over history. It’s our culture to understand that you cannot turn back time, but you can put your best foot forward. A collaborative management agreement was necessary for all practicality of (BLM and Forest Service) agency existence and operation. And now we move forward. Now we can begin to have those thoughtful discussions and aim for that more collaborative effort to put together these thoughtful management plans and resource plans.

Bowekaty: Most of the time, agency folks are passing through. And most of the time the tribes here on the New Mexico side have been that consistent voice, the consistent knowledge holders for different projects. We can assist incoming personnel, whether it be the Forest Service or the BLM, in understanding our viewpoint. That way, we can get off on the right foot.

HCN: One criticism that’s come up is that a solution like co-management doesn’t fundamentally alter destructive power structures perpetuating the dispossession of sovereign tribal nations. What is your response to this critique?

Maryboy: There’s always criticism regarding what you do. My response to that is: For the moment, that is a solution that we came up with, having no experience in creating a National Monument. That’s the best we can do, and we believe that’s a solution.

Wilson: We have that government-to-government right, in collaborating with the federal government. This is a test to that relationship, and it’s also a part of healing. Since the beginning of Bears Ears, it started through prayer and with the mission of healing, not just for Indigenous people, but for all people in America. Because to us, Bears Ears is a peacemaking place.

Lopez-Whiteskunk: We can be critical of systems, governmental systems, and political systems. But really, what does that get us at the end of the day? For many, many generations, we’ve done a great job of siloing people. We silo conversations, we silo agencies and government and communities. When are we going to get out of those silos and sit and look at one another as human beings, and understand that we don’t have time to continue to evolve in a direction which is doing us no good?

Bowekaty: I would say that I would agree with that (criticism) if we were not heavily involved in the agreement to begin with. We have received really good feedback from those career personnel that are in the Forest Service or BLM. We’re always trying to find the middle ground.

HCN: How do the five tribes handle differences or disagreements?

Wilson: They set aside their differences, because they all understand the importance of reclaiming ancestral lands that have been taken from us. The land misses us continuing our cultural practices. Having our tribal seal on the national monument sign is kind of a “Welcome Home” sign for us.

Lopez-Whiteskunk: My former experience with the tribe was we largely operated on consensus. Should a misunderstanding or a lack of understanding occur, we didn’t move on until everybody was on board and supported a movement. So I don’t think we dealt with things in a broad sense of a disagreement as much as helping one another understand where we were coming from and where we wanted to go. It serves (as) a great model, but it’s very time-consuming. In society today, we like to elevate the controversy; we like to have those disagreements, and we like the whole world to know about it. But in our more cultural format of how we deal with that, we tried to find the solutions before we move forward.

Bowekaty: As a co-chair, I want to always emphasize meaningful dialogue. We don’t always agree on everything, but I believe that we build consensus. And that comes from our understanding and listening to each other, and going back to what our core values are. It’s sometimes frustrating. At the same time, it’s very valuable to hear opposing viewpoints. And I get the fear: Are these disagreements gonna look dysfunctional? No, it’s not. It’s part of the functioning process.