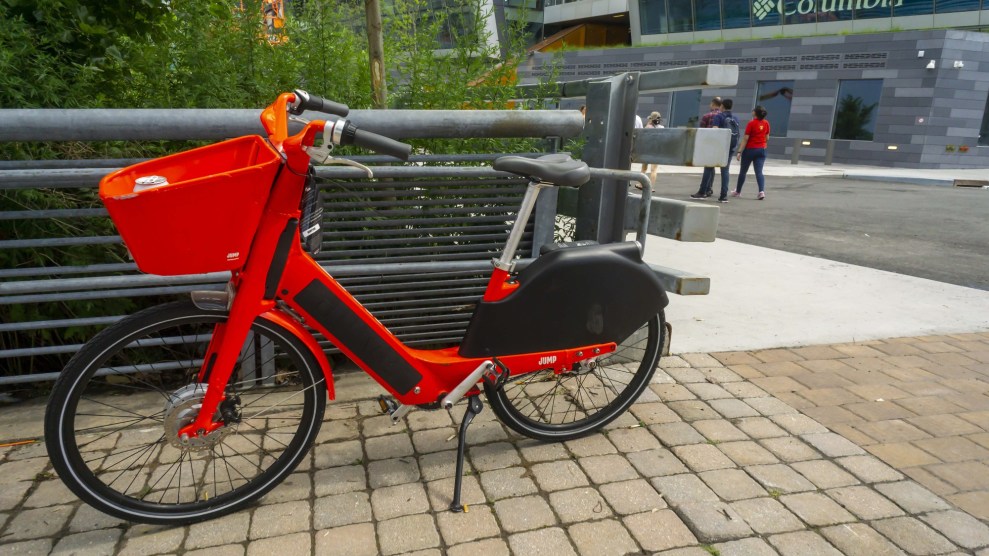 With West Virginia Sen. Joe Manchin suddenly on board with climate legislation (albeit one refashioned as an anti-inflation bill), wary Democrats met the announcement of a domestic-policy bill this week with jubilation and relief. At long last, it looks like Congress is on track to pass a $370 billion climate bill, including $260 billion in clean energy credits and billions more to subsidize the installation of solar panels and heat pumps.

For all the justified celebration, the bill exposes a persistent blind spot pertaining to transportation, the single largest source of emissions in the United States: Congressional Democrats struggle to imagine a world where fewer people drive.

Specifically, instead of reducing emissions by swapping their SUVs for identical electric models, more Americans could ditch their cars entirely and get e-bikes. A growing body of evidence suggests that such a mode shift is already happening, leading to lower emissions—as well as safer streets and healthier citizens. But instead of using its climate bill to catalyze this encouraging trend, the Senate has tossed out an e-bike tax credit that was in the Build Back Better Act that the House passed last year.

It’s possible that an amendment reintroduces the credit to the new Inflation Reduction Act, but that seems unlikely. At least for now, a federal e-bike incentive looks dead. America—and the planet—will be the worse for it.

For the unfamiliar, an e-bike is basically a traditional pedal bike affixed with a battery that offers a boost when a rider is conquering a hill, lugging groceries, or simply trying to avoid showing up sweaty to work. For a bit more money, e-cargo bikes offer additional capacity for hauling goods or kids.

For shorter trips, the extra power helps e-bikes replace car trips that a pedal bike could not. Each such substitution is a step toward curbing climate change because e-bikes produce significantly lower emissions per passenger mile than even an electric car. Their manufacturing process consumes less power and resources, and their small batteries are far less thirsty for electricity. (Which isn’t surprising, when you consider that the Hummer EV’s 2,923-pound battery weighs as much as 380 Rad Power e-bike batteries.)

Beyond the emissions benefits, a shift from driving to e-biking also improves public health (even with a battery, riders must pedal) and helps reduce traffic deaths, which have been surging in the United States. It’s hard to think of a mobility innovation whose benefits are so myriad.

Seeking to boost e-bike adoption, Democratic Reps. Earl Blumenauer of Oregon and Jimmy Panetta of California introduced the EBIKE Act in February 2021 to establish a new federal tax credit for e-bike or e-cargo bike purchases. That proposal was rolled into the Build Back Better Act, with an e-bike credit of up to $900. It’s a shame it didn’t make the cut for the Manchin-approved reincarnation of the bill, because evidence from countries like Norway indicates that e-bike rebates elsewhere have successfully induced more people to ride; they aren’t just windfalls for those who would have used one anyway.

But by the look of things, many American environmental NGOs and congressional Democrats still do not understand that e-bikes offer a realistic alternative to driving (or that electrification alone cannot limit temperature rise to 2 degrees Celsius by 2100, a commonly cited target). A lobbyist for the League of American Bicyclists, an advocacy group, told me earlier this year that skepticism about e-bikes’ potential as a car replacer was an obstacle in getting the proposed $900 e-bike tax credit through the House. One lesson from the credit’s ultimate demise: Those who appreciate the transformative power of e-bikes must recruit more allies, both on the Hill and among prominent interest groups that have Democrats’ ear.

Another takeaway is that, Big Bike jokes notwithstanding, the lobbying might behind bicycling pales in comparison to the auto industry. While the Senate dropped the proposed e-bike credit, its new bill contains $80 billion in subsidies for electric automobiles, more than 10 times the Joint Committee on Taxation’s forecasted 10-year cost of the House-approved e-bike subsidies. The Senate bill offers a rebate of $7,500 off an electric SUV or truck costing up to $80,000 (the cutoff is $55,000 for electric sedans, a discrepancy that makes little sense from either a climate or road-safety perspective), which is more than eight times the eliminated e-bike credit. The bill also removes the EV credit phaseout after a company has sold 200,000 eligible vehicles; GM, Tesla, and Toyota had been running up against that cap.

“It’s going to be up to state & local governments to transform the auto dependence of their communities. Washington won’t be a leader.”

The two primary biking associations, the League of American Bicyclists (for riders) and People for Bikes (for bike companies), simply cannot compete with AAA and the Alliance for Automotive Innovation, a carmaker industry group—not to mention the legion of automakers’ public affairs staff scurrying through Congressional hallways. That power imbalance makes it all the more critical that environmental and public health organizations intervene to help Congress grasp e-bikes’ potential.

Despite the rise of anti-car online communities and growing public concern about climate change, the dominant influence of car companies in federal policy seems as secure as ever. As the Urban Institute’s Yonah Freemark tweeted after reviewing the new Senate bill, “It’s going to be up to state & local governments to transform the auto dependence of their communities. Washington won’t be a leader.”

Happily, a flurry of new initiatives suggests that many state and local officials are up for the challenge. Oakland is launching an “e-bike library,” introducing the vehicles to residents of a low-income neighborhood. In May, the city of Denver began offering residents a rebate of $400 off an e-bike or $900 off an e-cargo bike (plus an additional $800 for low-income residents). The city was so overwhelmed by applications that it had to pause the program after 19 days. Hawaii and Colorado recently announced new statewide e-bike incentives.

Note, however, that simply making e-bikes cheaper isn’t enough to woo most people away from cars; new riders also seek safe and convenient bike lanes, preferably ones that are securely protected from cars whizzing by. The vast majority of American streets and roads are managed by states and cities, though a federal tailwind can always help. Encouragingly, the new Senate bill sets aside $3 billion for Neighborhood Access and Equity Grants, funding that could enhance bike-lane networks.

Still, seeing a 17-month push for a federal e-bike credit come to naught is a bitter pill to swallow. Noa Banayan, People for Bikes’ director of federal affairs, wrote that she was “sorely disappointed” by the exclusion, though she praised the Senate for getting behind any climate bill at all.

There’s still cause for hope. Even if Congress is behind the curve, a growing legion of e-bike converts recognize that the dual appeal of battery-boosted two-wheelers: You can help save the planet while having a hell of a good time zooming through your local streets.

Yes, the death of a federal credit is a setback for e-bikes—and for those seeking to lessen the vise-like grip that car interests maintain over American transportation policy. But even with the feds sitting on their hands, in 2021 more e-bikes than electric cars were sold in the United States. Momentum is building. So keep calm, and pedal on.