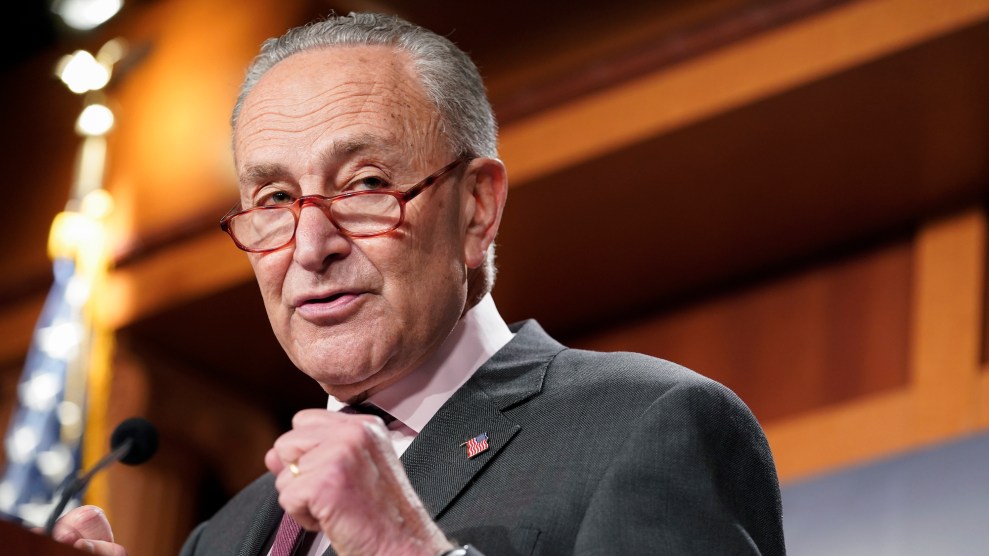 Senate Majority Leader Chuck Schumer speaks during a press conference on the Inflation Reduction Act on Friday in Washington.Mariam Zuhaib/AP

Senate Democrats’ climate and health care bill is one big step closer to becoming law after the body’s parliamentarian signed off on most of the package on Saturday morning.

The “Inflation Reduction Act,” which Vox called “the biggest thing the US has ever done to tackle climate change,” includes nearly $370 billion of climate spending. It would also allow Medicare to negotiate prescription drug prices and reduce the deficit through measures including a new minimum tax on some of the country’s largest corporations.

Less than two weeks ago, there seemed to be little chance of Democrats passing major legislation before the midterm elections in November. But in late July, Majority Leader Chuck Schumer and Sen. Joe Manchin, who’d helped tank President Joe Biden’s more ambitious Build Back Better package, shocked Washington by reaching a deal that they said would lead to hundreds of billions in climate spending while also raising revenue.

The key question then became what Sen. Kyrsten Sinema, the other major Democratic obstacle to Senate action, would do. Late Thursday, Sinema said she was largely behind the bill aside from a provision that would have removed a tax break used by private equity billionaires that even Donald Trump has said allows plutocrats to get “away with murder”. Sinema added, however, that her overall support was still “subject to the parliamentarian’s review.”

On Saturday, Democrats cleared that hurdle when they announced that Senate parliamentarian Elizabeth MacDonough—the nonpartisan expert in charge of determining whether legislation conforms with Senate rules—concluded that most of the bill can be passed through reconciliation. It means that Democrats only need a bare majority—not the 60 votes required to overcome a Republican filibuster—to pass the bill. The votes in favor are expected to be 50-50 with Vice President Kamala Harris serving as the tie-breaker.

Democrats plan to take a procedural vote on Saturday to move forward with the “Inflation Reduction Act.” Assuming it survives the Senate, the bill would head to the House of Representatives, where Democrats have had less trouble passing bills. Surreal as it may seem, Congress actually appears to be on the verge of doing something seriously big.