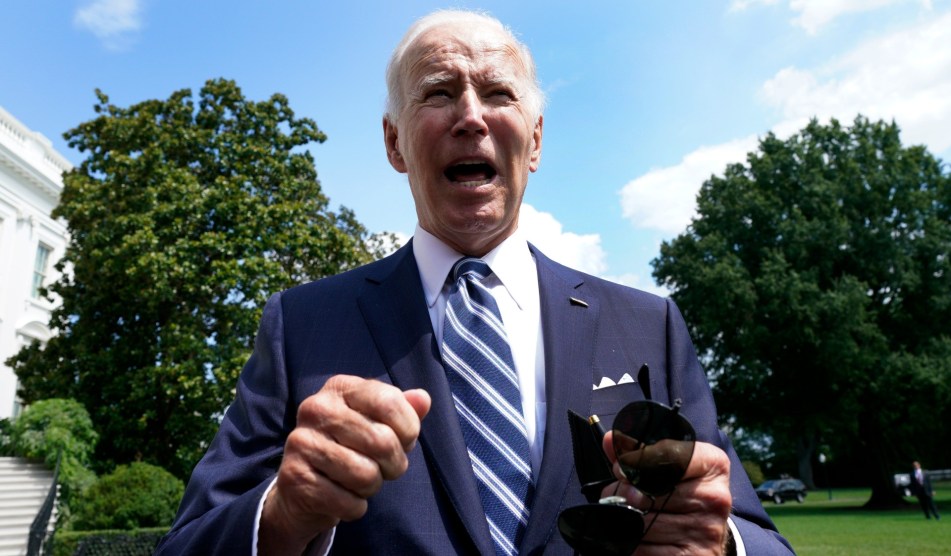 President Joe Biden speaks to the members of the media on the South Lawn of the White House before boarding Marine One in Washington, D.C., US, on Friday, Aug. 26, 2022.Yuri Gripas/CNP via ZUMA Press Wire

In response to a question this summer, Democratic Rep. Dean Phillips of Minnesota said he didn’t want 79-year-old President Joe Biden to run for reelection in 2024, at which point Biden would be 81.

“I think he’s a man of decency, of good principle, of compassion, of empathy, and of strength. But to answer your question directly, which I know is quite rare, uh no, I don’t,” Phillips said of a potential second presidential run for Biden.

Rep. Angie Craig, another Minnesota Democrat, shared a similar sentiment: “I would say we need new leaders in Washington up and down the ballot in the Democratic Party.”

Their public stances represent an uncommon split from the broader Democratic party, which has largely punted the question of another run to Biden himself. At least six US Senators and nine members of the House have dodged answering the question entirely, according to an August tally by Axios. Rep. Carolyn Maloney of New York, who said during a primary debate that she didn’t think Biden would run again, was pilloried by Republicans, who highlighted her opinion as an example of Democratic disarray. Within days, she issued a public apology. “Mr. President, I apologize. I want you to run. I happen to think you won’t be running, but when you run or if you run, I will be there 100 percent,” she said on CNN.

But now, there’s evidence that nearly three-quarters of Americans agree with Reps. Phillips and Craig: They don’t want the presidential incumbent to try for a second term. According to a national poll released Thursday by Marquette Law School, a whopping 72 percent of Americans don’t support Biden running for reelection.

An unsurprising 12 percent of Republicans who answered the poll want Biden to run again, while roughly half of Democrats do. Just 21 percent of independent voters, who tend to be more ideologically centrist than people who register as Democrats or Republicans, support Biden running for reelection—a figure that is staggering, considering Biden positioned himself as a moderate during the 2020 presidential primaries against more progressive candidates like Sen. Bernie Sanders of Vermont and Sen. Elizabeth Warren of Massachusetts.

The lack of fervor for the President is not because Democrats think Biden is doing a terrible job. In fact, the President’s overall approval rating across Americans of all political affiliations increased from 36 percent in July to 45 percent in September, according to the same Marquette survey. Among Democrats, a whopping 82 percent think his performance is satisfactory.

Thursday’s poll did not break down why the vast majority of respondents don’t want to see “Biden 2024” yard signs. But it might have something to do with voters from all ideologies wanting fresh faces to enter politics, having attributed some of the nation’s stagnation on major issues like worsening climate change and staggering student debt to career politicians’ tendency to maintain the status quo.

“My hunch is that we need new leadership across the board—Democrats, Republicans, I think it’s time for a generational move,” Democratic Rep. Tim Ryan, who is running for Senate in Ohio, said in September.

Age, though, isn’t deterring as many Republicans from hoping for a Donald Trump run at reelection in 2024. In fact, Marquette’s survey found that Republicans have more excitement for Trump to run again than Democratic voters feel for Biden: while 52 percent of Democratic respondents said they supported Biden vying for a second term, 66 percent of Republicans respondents said they want to see Trump try again, at which point the embattled former president would be 78.

The poll also envisioned a 2024 presidential election that turned into a repeat of the 2020 one. In a hypothetical match-up between the same two contenders, Biden would have the support of 40 percent of the poll respondents, while Trump would get 36 percent.