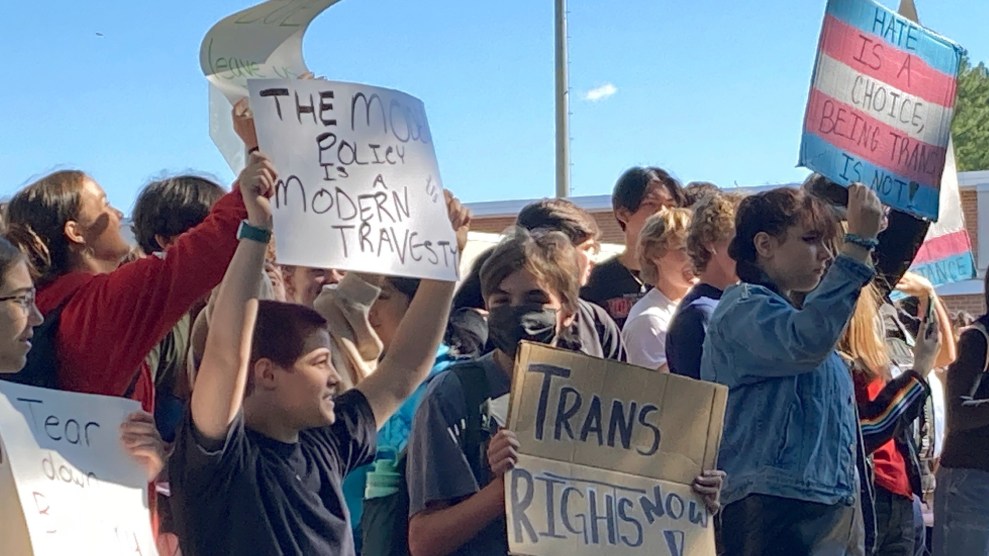 Earlier this month, Gov. Glenn Youngkin announced that his administration would seek to roll back the rights of transgender and nonbinary students in Virginia. But Gen-Z’s approach to direct political engagement is once again striking back, this time with young Virginians rallying to protest the proposals they say are a political stunt that would harm trans kids.

On Tuesday, thousands of students at more than 90 schools participated in walkouts across the state, making it one of the largest student demonstrations in recent memory. The walkouts were organized by the Pride Liberation Project, a student-led LGBTQ advocacy group in Virginia. Ranger Balleisen, a 17-year-old student at McLean High School and one of the lead walkout coordinators in the project, told me he was blown away by the turnout.

“It’s incredible. Seeing that there are thousands of students who are willing to walk out for trans rights in my state is honestly a very supporting and amazing feeling to have,” Balleisen said. “And while obviously, the circumstances surrounding that are rather grim, knowing that I have the support of so many people has been very helpful to me.”

The proposed policies unveiled earlier this month would reverse the more progressive ones created just last year to protect students against gender discrimination by requiring students to use the bathroom according to their “biological sex.” Youngkin’s policies also seek to bar students from adopting a new name or pronoun without their parent’s consent, mandating that families provide legal documentation in order to change a student’s name or gender for school records.

Soon after Youngkin’s announcement, Balleisen said that he worked with the Pride Liberation Project to secure approval from dozens of administrators in order to coordinate the walkouts, create safety measures to protect kids from potential counter-protesters, and educate students on their rights.

“It was daunting. For a lot of these students, this was going to be their first walkout,” Balleisen said. But ultimately he said he knew it was important that students had their voices heard.

Of course, Youngkin’s proposals are not unique to Virginia. From Florida to Idaho, similar transphobic laws and school board policies have been popping up all over the country. Notably, Gov. Gregg Abbott of Texas has been targeting trans youth legislatively for years. In February, Abbott ordered Texas’s welfare agencies consider sending children to foster care if a parent had allowed a doctor to give them puberty blockers or hormone therapy, likening such medical care to child abuse. But a judge ordered a temporary injunction prohibiting welfare officials from investigating parents who are members of the group PFLAG, a national LGBTQ organization that sued to try to halt the investigations.

If this was about parental rights, then we'd be talking ending mass incarceration, stopping deportations, and expanding language access so every parents can engage with their student's school.

But it's not about parental rights- this is about hurting Queer students for politics.

There’s still nearly a month before the Virginia Department of Education makes a final decision on whether to implement Youngkin’s guidelines. LGBTQ advocates are calling for the VDOE to toss them out, arguing that the changes could inflict significant harm on LGBTQ youth. Meanwhile, the policies have sparked fierce debate on the state’s regulatory town hall forum, even causing the page to crash the day it opened.

In the meantime, the Pride Liberation Project is not holding back. The group announced that they will be launching a months-long campaign to protect LGBTQ rights in Virginia and mobilize students on school boards and the state general assembly.

“I think that students demonstrating is one of the most important ways that students can use their voice,” said Balleisen. “Especially because when we are young, we do not have the opportunity to vote in elections. And so therefore, I think having demonstrations and protests and movements like this is a great way to show that even though we do not have the political power to vote, we still are civically engaged.”