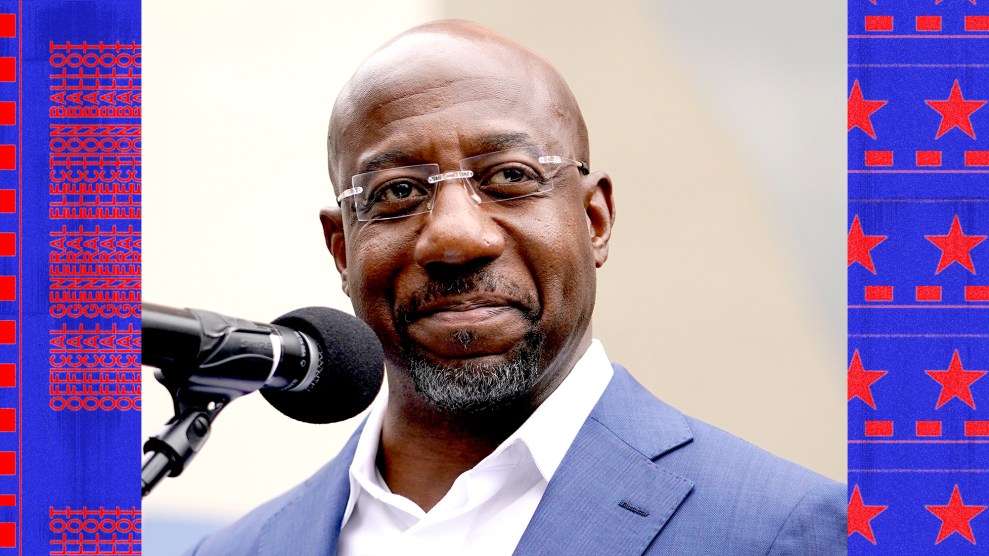 Warnock bested Walker 49.4 percent to 48.5 in the Nov. 8 general election, but Georgia law requires a runoff election when neither candidate surpasses 50 percent of the vote. Georgia is one of just two states—the other is Louisiana—to use runoffs in this way. In Georgia, the model was created to dilute the voting clout of Black voters who tended to coalesce around one candidate in a bloc while White voters more often divided their support among multiple candidates.

But in the last couple Georgia elections where runoffs were triggered, it was Black voters and Democratic candidates who have come out on top.

While the full vote tallies have not yet been finalized, Warnock currently leads Walker by about 1 percentage point in Tuesday’s race.

Top of voters’ minds at the ballot box Tuesday were Walker’s towering list controversies, including allegations that he was violent towards women and that in at least two cases he paid for women to get abortions despite his staunch anti-abortion stance. Voters were also upset by the ways in which Walker misrepresented himself, from falsely alluding to being a law enforcement officer to lying about his college education to claiming a tax credit for a primary residence in Texas while running for office in Georgia.

Toby Cooper, whose job is scheduling commercials for radio stations, told Mother Jones she voted for Warnock. “I know they say politicians lie. But nowadays, more than ever, we need people who are going to be honest and really come in and help the people,” Cooper said of Walker after voting in Cobb County, Georgia on Tuesday. “The lying and the misrepresentation of himself was really kind of outrageous.”

There were also elements outside of Walker’s control working against him, such as the tightened early voting timeline in the runoff which his party pushed for, and dampened GOP turnout because the outcome would not determine which political party controlled the Senate.

Due to the 2021 passage of a Georgia voting bill called SB 202, the time period between the general election and the runoff was just four weeks, versus the nine weeks voters had in previous elections. Republican Secretary of State Brad Raffensperger attempted to shorten the early voting period even further by preventing counties from offering an optional early-voting day on a Saturday.

Though Raffensperger ultimately lost the legal battle that would have barred a key weekend early voting day, the counties that did opt to offer early voting on Saturday November 26 were “disproportionately democratic” counties, says Republican pollster John Couvillon.

While historically Democrats have been more likely to vote early than their GOP counterparts, early voting among members of both parties has become more popular in recent years. More than 2.5 million Georgia voters cast early ballots in the state’s general election—far beyond the 1.8 million early voters from 2018, and within close range of the 2.6 million who voted early in peak-pandemic 2020. On Friday alone, more than 350,000 people voted early. The record in the 2018 midterms was about 233,000.

Adrianne Shropshire, the executive director of Black PAC, an independent voter mobilization group that has knocked on millions of Georgia doors this cycle, says the effort to curtail Black voters by shortening the period of early voting did the opposite of what the GOP state policymakers had intended.

“When you create unjust laws, ultimately, the people who are disenfranchised by those laws will work for their full citizenship and to be treated as every other American citizen deserves to be treated when it comes to having access to the ballot,” she says. “God doesn’t like ugly,” she adds, “and karma’s a bitch.” Another side effect of the runoff system that hurt Walker was that he was the only Republican on the ticket.

Early reporting counties suggest Republican turnout was much lower in the runoff than in the general election, when Georgia Gov. Brian Kemp received roughly 200,000 more votes in his gubernatorial race than Walker did in his race for the Senate. Couvillon, the founder of a Louisiana-based polling firm that does work around the country (his firm was not involved in the Georgia race), says it’s likely that many Republicans who voted for Walker the first time around weren’t as motivated to come to the polls because popular GOP politicians such as Kemp weren’t on the ticket.

In the general election, Niki Rece of Marietta, Georgia supported Kemp because she felt that his opponent, Stacey Abrams, was “just so far in left field, she was in the next ballpark.” But in the runoff, she told Mother Jones she voted for Warnock.

Even if Republicans had showed up en masse to vote for Walker, it wouldn’t have affected the Senate majority. It’s not that the seat doesn’t matter to either party, but the reasons why it does matter are convoluted to most outside the Washington, DC beltway. For example, the fact that Warnock won will make it procedurally easier for Democrats to confirm liberal judicial nominations, but it is unlikely to be a game-changer in passing major pieces of progressive legislation. “It is an argument that’s tougher to make—about [the importance of] being the 50th Senator versus losing and being one of 49 Republicans,” says Couvillon. “That’s the kind of stuff that gets glassy eyes when you try to explain all the arcane little facets to voters.”

But beyond the Senate-majority math and the GOP’s miscalculations about limiting early voting,  the biggest thing Walker had working against his campaign was himself.

“I don’t like Warnock,” said retail worker Ken O’Dell, despite voting for him. “I did not vote for him last time. But you know, you have an election where your choices are basically dumb and dumber.”

—With reporting by Kiera Butler from Cobb County, Georgia