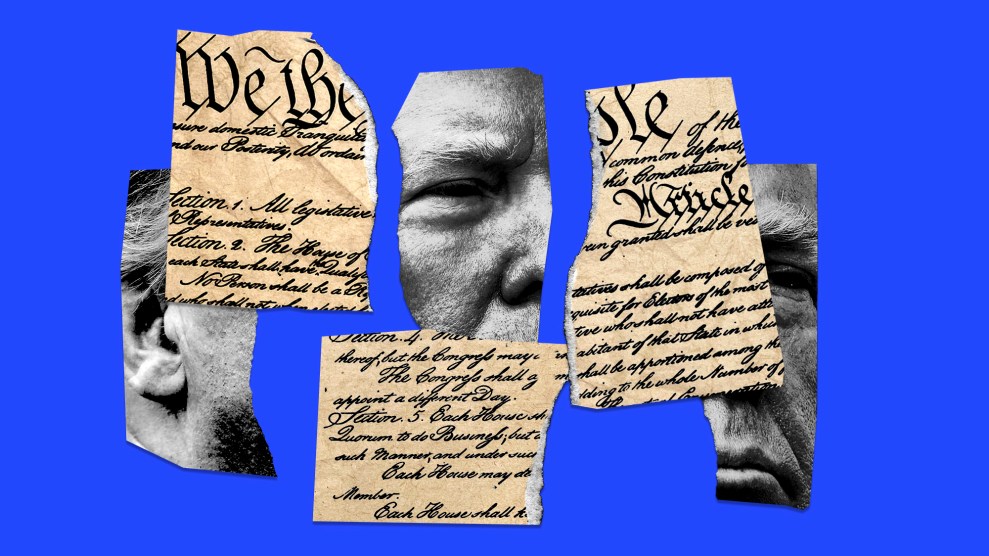 The day after Donald Trump, a former president and the leading contender for the Republican presidential nomination in 2024, called for the “termination” of provisions of the US Constitution governing elections and essentially demanded that he be declared the “rightful winner” of the 2020 election, neither the New York Times nor the Washington Post ran a front-page story reporting Trump’s call for ripping up portions of the nation’s founding document. No mention of this even appeared in the Times that day. Trump’s unprecedented and dangerous statement was not deemed a big deal. This raised a question: Have major media players still not figured out how to cover Trump’s extremism?

In recent weeks, Trump has dined with a Hitler fanboy and an antisemitic rapper, embraced the bonkers QAnon conspiracy theory (the world is run by an evil cabal of Democrats and elites who are baby-eating pedophiles and sex-traffickers!), and vowed he would, if returned to the White House, pardon the January 6 insurrectionists who assaulted the US Capitol. All of these developments have been reported on by the top news organizations. Yet the coverage does not seem to capture fully the danger posed by a wannabe-tyrant validating forces of hatred and irrationality. He won the GOP nomination and presidency once; he could do so again.

The first story each paper published on Trump’s “termination” comment focused on the reaction to Trump’s outlandish remark. The Times cooked up an odd formulation, telling readers that Trump’s “extraordinary antidemocratic statement…drew a degree of bipartisan condemnation over the weekend, with a flood from Democrats and a trickle from Republicans.” The only GOP “condemnation” cited in the piece came from a newly elected GOP House member who said, “Well, obviously I don’t support that.” This hardly amounted to even a trickle of Republican denouncement. More significant was that most Republicans had said nothing. And this was a rather conventional approach to a rather unconventional event, emphasizing the political angle not the remark itself and its implications.

The Washington Post’s initial coverage similarly was a report on the White House blasting Trump for this statement. It was headlined, “White House rebukes Trump’s suggestion to suspend Constitution over 2020 election.” (Perhaps it’s a quibble, but “termination” seems to go even beyond “suspend.”) Politico did the same. (“White House to Trump: ‘You cannot only love America when you win.’”) Axios also zeroed in on the reaction. (“Lawmakers condemn Trump’s call to suspend Constitution.”)

There was nothing wrong with these articles. But they followed the same-old/same-old formula: Trump does outrageous thing X; friends and foes say Y. Rinse. Repeat. The issue was not whether Republicans would find a way to distance themselves from this remark but whether they would disavow Trump for suggesting the Constitution be terminated. The party’s allegiance to a fellow who had just espoused a dictatorial sentiment was a key element of this story.

Reporters on Capitol Hill did chase after GOP legislators to obtain responses to Trump’s latest affront. Yet by now, most Republicans have the drill down: say something mildly critical about the most recent Trump misdeed—that is, if you say anything— but refuse to renounce him and his bid to return to the White House. Sen. John Cornyn (R-Texas) described Trump’s post as “irresponsible” and posited that the possibility of Trump winning the GOP nomination was “increasingly less likely given statements like that.” That’s not too tough.

Republican Senate leader Mitch McConnell demonstrated once again that he is a master of this poke-at-but-don’t-disown strategy, noting that anyone who believed the Constitution should be terminated “would have a very hard time being sworn in as president of the United States.” This was more a pundit-like prediction than a clear rebuke. McConnell sidestepped the most important topic, declining to say whether he would stand by his previous promise to support Trump should he win the GOP nomination. Is it not big news that the top-ranking Republican in Washington remains committed to supporting a candidate who has urged abolishing the Constitution? The New York Times, as far as I can tell, didn’t report McConnell’s comments. The Post ran an AP dispatch on its site that stated that McConnell had issued a “rebuke” to Trump, adding deep within the story that McConnell had “deflected questions…over whether he could support Trump if he becomes the Republican Party’s 2024 presidential nominee.”

The predictable had occurred. Trump made a preposterous remark. Democrats soundly excoriated him, and Republicans mealy-mouthed the matter. The media reported the fuss, and we all move on. But is there another way to cover this? Could news organizations better frame this development as a controversy of profound and lasting significance? A leading contender for the presidency—a job in which the top priority is to “protect and defend the Constitution”—had said screw that and displayed a desire to gain power as an autocrat. Trump reaffirmed that he is a threat to the nation’s constitutional order. (See January 6.) Might that warrant more oh-shit notice?

And can reporters apply more pressure on members of Trump’s party to address his statement and its meaning? It is not hard to envision them asking McConnell (and others) every day the same question—“Once more, Sen. McConnell, will you tell us whether you would still support Trump as the Republican nominee?”—and report the ongoing refusal to answer this query. Can they pursue Republicans for days on this topic and not take no-comment for an answer? Must they accept deflection?

Such an approach might come across as confrontational. And it could feel silly for a reporter to repeat the same question over and over, if no reply comes. But when the subject at hand is a fundamental threat to democracy, what should news outlets do? Punch out a handful of pieces and then quickly proceed to the next story? In years past, such a remark would have dominated the news cycle for days, maybe even a week. But in our current hyper-media ecosystem, stories come and go quickly. McConnell and his compatriots need only grit their teeth and tough it out for a short spell. Something else will surely come along. Each day brings new shiny objects.

Consequently, an outrage more outrageous than the usual outrage becomes part of the never-ending rush of events. And the growing authoritarian threat Trump presents—empowering antisemites, excusing political violence, encouraging paranoia and conspiracism, and undermining the fundamental rules of American democracy—is not appropriately highlighted. The transgression of the moment joins a long line of transgressions, diluted in a giant cauldron of wrongdoing. Some folks—most recently, Patti Davis, a daughter of Ronald Reagan—have advocated ignoring Trump and denying his lies and scoundrelism oxygen. Yet as a former president and leading GOP presidential aspirant with a following of millions, he remains an important figure in American life who must be reckoned with. With Trump perhaps the No. 1 risk to democracy—as far as any one person can be—Trump TV cannot simply be turned off.

His statement regarding the Constitution was an episode of Trumpism that deserved more elaborate and sustained treatment. Even against the steady stream of Trump excesses over the past seven years, a demand to burn the Constitution stood out—especially with Trump’s recent and deeper forays into the realm of authoritarianism. If he is beginning his latest White House chase with a call to abolish the Constitution—while hailing the January 6 rioters and hobnobbing with antisemites and a white nationalist—imagine where might be heading. Armed resistance?

The media have often had a difficult time fully contextualizing and conveying Trump’s extremism. That’s understandable. His brand of demagogic politics undermines deeply held assumptions within the media. The national press long has been guided by the fundamental belief that both sides of the country’s political debate are generally morally equivalent—or, at least, that it’s not up to journalists to judge—and each deserve the same reporting approach. Yet Trump, with his continuing assault on democracy, is different and challenges this model. That is, he breaks it. As he heads further down this perilous (for the nation) path, conventional political coverage will not be sufficient. Like climate change, a pandemic, or a financial crisis, Trump, a would-be, Constitution-defying autocrat, and those enabling and supporting him jeopardize the nation. He and his movement ought to be covered not as yet another subject for the politics section but as a direct danger to American democracy.