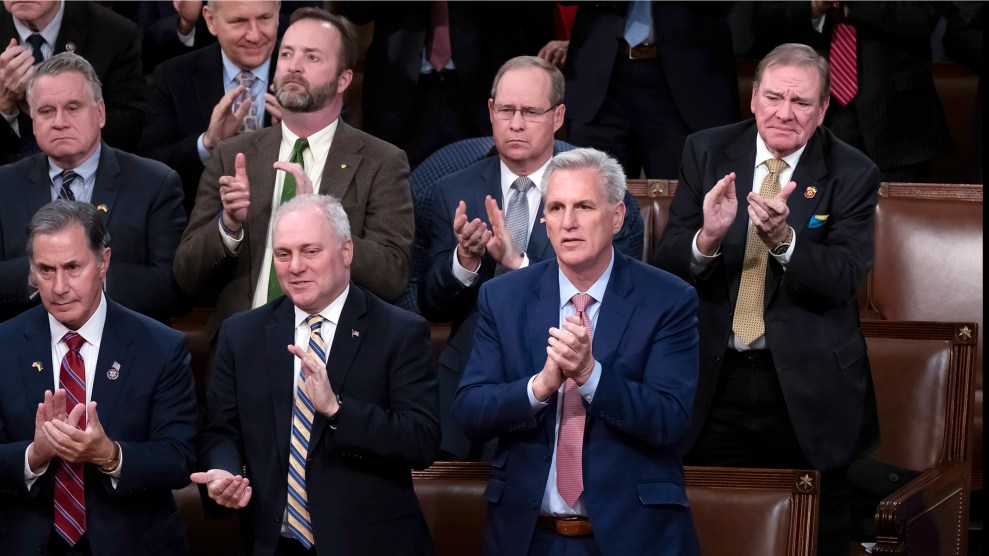 The first item listed on this week’s House legislative schedule following the historically chaotic selection of a House Speaker and seating of members—including the scandal-plagued and apparently unpopular freshman George Santos (R-N.Y.)—is consideration of the ill-named Family and Small Business Taxpayer Protection Act.

This Republican bill is ill-named because what it actually does is protect tax cheaters by repealing most of the new IRS funding set forth in last year’s Inflation Reduction Act.

If any of you political junkies feel a touch of déjà vu, that’s understandable. Neutering the IRS was also a top priority for Republicans the last time they took over the House from the Democrats, in January 2011. And neuter the taxman they did. As I wrote previously:

From 2010 to 2018, even as the IRS received 9 percent more tax returns, its annual budget was slashed by $2.9 billion—a 20 percent reduction that cost the agency more than one-fifth of its workforce. Investigations of non-filers plummeted and the amount of outstanding tax debt the IRS formally wrote off (based on the 10-year statute of limitations for collections) more than doubled—from less than $15 billion in 2010 to more than $34 billion in 2019.

Virtually no partnerships were audited in 2018. By then, with Donald Trump in the Oval Office, the kneecapped IRS was scrutinizing the individual returns of just 0.03 percent of those $10 million–plus taxpayers, down from a peak of 23 percent in 2010. Audits of the $5 million–to–$10 million filers fell from just under 15 percent to a scant 0.04 percent.

A fair subset of superwealthy Americans doesn’t even bother filing. The Treasury Department’s Inspector General for Tax Administration reported in 2020 that nearly 880,000 “high income” non-filers from 2014 through 2016 still owed $46 billion, and the IRS was in no condition, resource-wise, to collect. The 300 biggest delinquents owed about $33 million per head, on average. Fifteen percent of their cases had been closed without examination by IRS staffers, and another one-third weren’t even in line to be “worked.”

The recently enacted IRS funding—$80 billion over 10 years—was meant to remedy this shameful state of affairs. The Congressional Research Service said the money would be used to modernize the tax agency’s decrepit systems, provide operations support, improve taxpayer services, and “monitor and enforce taxes on digital assets such as cryptocurrency.” Perhaps most importantly, it would bolster the agency’s ability to hire specialized enforcement agents—tax professionals with the expertise needed to decode the opaque and voluminous returns of sophisticated tax-avoiders like the Trumps, who have armies of tax lawyers and accountants on the payroll.

The projected return on investment, just from collecting taxes owed, is substantial. The Congressional Budget Office estimated that new enforcement measures alone would reap $204 billion over 10 years—about $4.50 per dollar spent on that aspect.

No matter. As the Inflation Reduction Act moved toward passage last August, Republican officials and Trump minions unleashed a barrage of lies on social media, falsely claiming the IRS would use the money to hire 87,000 new agents who would then come after ordinary taxpayers—people like you!

The House GOP seems inclined to double down on that fear-mongering. The nonprofit group Americans for Tax Fairness points out in a press release that the repeal legislation would rescind nearly $72 billion of the promised funding—90 percent of the total—including:

“The richest 1 percent avoid paying $160 billion a year that they owe in taxes due to inadequate tax enforcement. Republicans are voting to let them keep on cheating the rest of us,” Frank Clemente, ATF’s founder, lamented in the release.

With the Democrats in control of the Senate, this particular vote may be largely performative. But Steve Rosenthal, a senior fellow at the Tax Policy Center and former staff lawyer for Congress’ nonpartisan Joint Taxation Committee, told me he suspects that IRS funding will be an ongoing issue in Senate battles and future congressional budget debates—including the upcoming debt ceiling fight.

Republican lawmakers, in any case, seem to have a fetish for performative votes on anti-tax bills written to benefit America’s wealthiest. As I pointed out in my book last year, after a Who’s Who of dynastic families spent millions lobbying for the repeal of inheritance taxes, congressional Republicans introduced no fewer than 44 bills in a decade aiming to do precisely that.