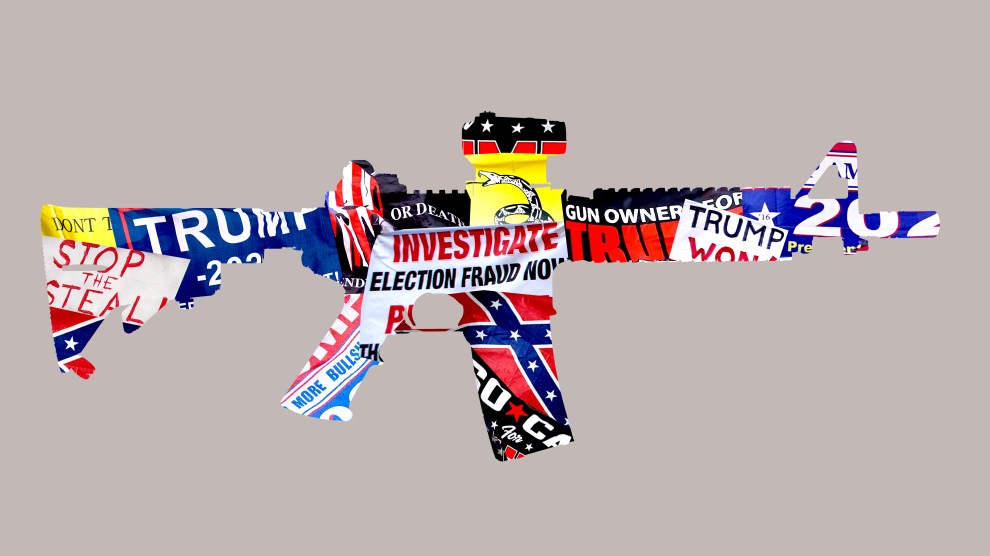 Two years after the January 6 disaster, evidence continues building that numerous extremists went to Washington that day armed with guns, tactical gear, and other weapons. The mass attack on Congress incited by Donald Trump was grisly and devastating: The Capitol Building was damaged and desecrated, scores of law enforcement agents were assaulted, a QAnon devotee was fatally shot while breaking into the Speaker’s Chamber, and several police officers took their own lives in the aftermath. Yet, that harrowing day held the potential for far greater bloodshed.

The final report from the House select committee on January 6 and court documents from federal prosecutions contain further evidence of Trump supporters who showed up with weapons and violent intent. The evidence is important to highlight amid a long-running disinformation campaign from the political right, including the lie that no one brought guns to DC to stop Joe Biden from becoming president. Trump and his allies have long deployed versions of that false claim to help depict the insurrection as a “lovefest,” a “normal tourist visit,” and other absurdities intended to cover up the violent siege and seditious conspiracies that Trump methodically encouraged and whipped up. To this day, the ex-president portrays January 6 offenders as “patriots” wrongly persecuted, and he has vowed pardons and a government apology for “many” of them if he is elected president in 2024.

FBI investigations revealed that some who stormed Congress were wary of DC’s strict gun laws and decided to leave their firearms behind or stashed them away from the Capitol. But many others were undeterred—and top White House officials reportedly knew before the assault that legions of diehard Trump supporters had arrived for the president’s speech at the Ellipse armed with various weapons. In explosive testimony to the House committee detailed in its final report, Cassidy Hutchinson, who served as a top aide to Trump chief of staff Mark Meadows, described the danger:

Cassidy Hutchinson told the Select Committee she heard that thousands of people refused to walk through magnetometers to enter the Ellipse because they did not want to be screened for weapons. According to Hutchinson, the Deputy Chief of Staff for Operations whose responsibilities included security-related issues, Tony Ornato, told the President that the onlookers “don’t want to come in right now. They have weapons that they don’t want confiscated by the Secret Service.” When he arrived at the Ellipse that morning, President Trump angrily said: “I don’t [fucking] care that they have weapons. They’re not here to hurt me. They can march to the Capitol from here.”

Among the tens of thousands of people who did go through the magnetometers, according to the report, the Secret Service confiscated “269 knives or blades, 242 canisters of pepper spray, 18 brass knuckles, 18 tasers, 6 pieces of body armor, 3 gas masks, 30 batons or blunt instruments, and 17 miscellaneous items like scissors, needles, or screwdrivers.”

Elsewhere in the area, National Park Service officers and local police were encountering Trump partisans with tactical gear and guns:

Three men in fatigues from Broward County, Florida brandished AR-15s in front of MPD officers on 14th Street and Independence Avenue. MPD advised over the radio that one individual was possibly armed with a “Glock” at Fourteenth Street and Constitution Avenue, and another was possibly armed with a “rifle” at Fifteenth Street and Constitution Avenue around 11:23 a.m. The National Park Service detained an individual with a rifle between 12:00 and 1:00 p.m.

A Texas man who pleaded guilty to January 6 charges and to posting a comment about assassinating Democratic Rep. Alexandria Ocasio-Cortez carried a gun at the Capitol, according to the committee’s report. He said he’d gone to DC because he was “following the instructions of former President Trump.”

“Conquer or Die. This needs to be our attitude.”

A group of Three Percenter militia members from Florida who called themselves “B SQUAD” were charged in August for participating in the assault on Congress; as the New York Times reported, court documents described how one of the perpetrators “posted a video of himself outside the Capitol wearing body armor and a gas mask and carrying an AR-15-style rifle.”

These details made public in recent months add to a pile of earlier such evidence. As my colleagues and I documented in a Mother Jones investigation in 2021, public video footage, congressional testimony, and documents from more than a dozen federal criminal cases revealed that numerous Trump supporters descended on DC “armed for battle with guns and other potentially lethal weapons,” and that communications among various January 6 suspects indicated that “many of their fellow insurrectionists were armed with guns.”

Among others packing heat and involved in the violence were a Maryland man who called for overthrowing the federal government, a Texas Three Percenter who wore body armor and said he intended to “take over the Congress,” and an Indiana man who carried a pistol with highly lethal ammunition and was among the many perpetrators who expressed intent to harm Nancy Pelosi.

Millions of Americans continue to consume brazen lies about January 6, whether from Fox News or the disgraced former president.

A plot by a group of Oath Keepers, whose founder Stewart Rhodes was convicted of seditious conspiracy in November, included an arsenal of guns stockpiled in a hotel across the river in Northern Virginia. Rhodes predicted “a bloody and desperate fight” if Biden were to be certified president, and at one point during planning for January 6 he messaged fellow Oath Keepers: “Conquer or Die. This needs to be our attitude.” A convicted co-conspirator testified that the Oath Keepers’ so-called quick reaction force was poised to use the arsenal stashed a few miles from the Capitol and intended to stop the certification of Biden “by any means necessary.”

The domestic extremism movement unleashed by Trump remains a clear and present danger. A Tennessee man arrested last May in connection with the assault on Congress was further charged in December for plotting to murder FBI agents who investigated his actions on January 6, according to the Justice Department.

Millions of Americans, meanwhile, continue to consume brazen lies about the violence and danger of January 6, whether from Fox News and other right-wing media or the disgraced former president himself. “Just to be clear on terms, an insurrection is when people with guns try to overthrow the government,” Tucker Carlson said on Fox in June. “Not a single person in the crowd on January 6 was found to be carrying a firearm. Not one.”

This week, congressional Republicans descended into chaos over their inability to elect a House speaker, doing battle with each other in the very chamber where Trump extremists “put a knife to the throat of democracy,” as Biden later described it. A far-right faction in the speaker fight has been led by Rep. Scott Perry of Pennsylvania, who helped spearhead the Trump plot to overturn the 2020 vote and stands with other election deniers in the House GOP.

As Perry and his fellow extremists worked to take down Kevin McCarthy (who at first condemned the insurrection only to join the cover-up himself), Trump continued using social media to reiterate the lie that his January 6 speech was “peaceful and patriotic.” The siege that nearly ended the peaceful transfer of American presidential power, Trump falsely claimed, was but a “protest” over fraud that had supposedly deprived him of reelection.

Two years later, the GOP is in a grim state. And it is no coincidence that accountability for that horrific day of democracy on the brink remains very much an unfinished story.