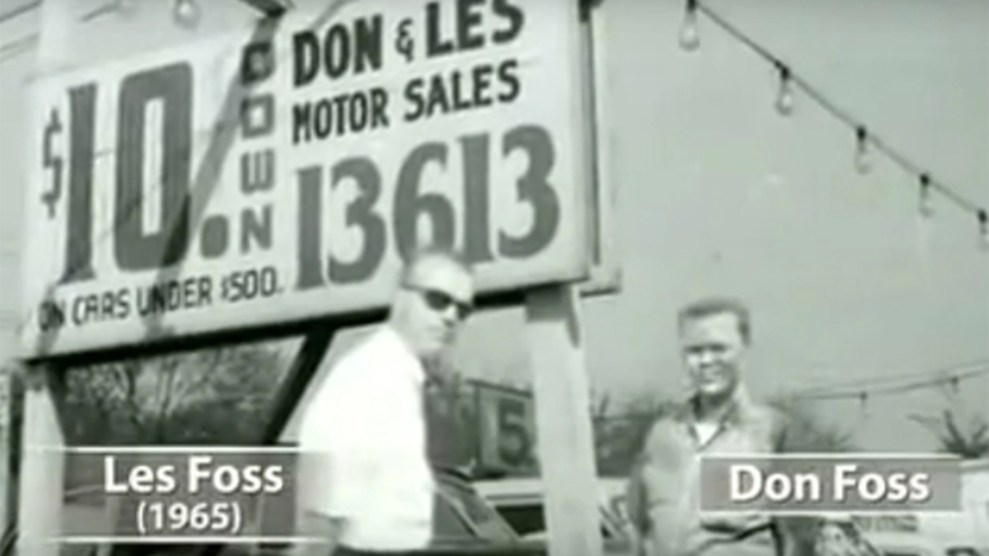 If billionaire Don Foss were still alive, he’d have a big problem on his hands. On Wednesday, the Consumer Financial Protection Bureau and New York Attorney General Letitia James filed a joint lawsuit against Credit Acceptance Corporation (CAC), the Michigan-based “predatory” lender that Foss—who died last year at the age of 78—founded back in the 1970s.

Credit Acceptance specializes in subprime auto lending—that is, peddling loans to buyers with bad credit. That’s perfectly legal, within limits, but James and the CFPB accuse the company of “misrepresenting the cost of credit and tricking its customers into high-cost loans on used cars.” The lawsuit demands that CAC “discontinue its illegal practices, reimburse harmed consumers, pay back wrongfully earned gains, and pay a penalty.”

James and the CFPB noted that about 1.9 million people secured loans through Credit Acceptance and its network of more than 12,000 affiliated dealers from November 2015 through April 2021. Those loans totaled more than $4.9 billion and typically bore “very high” interest rates.

In a 2016 Mother Jones profile of Foss’ subprime empire, investigative journalist Gary Rivlin described how Credit Acceptance turned the car-buying experience into, as the lawsuit announcement put it, “a nightmare” for many of the company’s borrowers, “who face unaffordable monthly payments, vehicle repossessions, and debt collection lawsuits.”

Following in his father’s footsteps, Foss began his career as a used-car salesman but soon discovered there was more money to be made collecting interest than selling run-down vehicles. He took that revelation to the bank, launching Credit Acceptance in the early 1970s. As Rivlin writes:

What Foss did was practically invent the subprime car loan, a market that today exceeds $100 billion a year. First as a dealer, and later as the founder of an auto-financing company called Credit Acceptance, he was “really the first to see all the money to be made arranging the financing for cars that would otherwise end up in the crusher, and selling them in poor neighborhoods,” says a longtime auto industry consultant.

As Foss’ business model began attracting potential rivals, it also drew the attention of attorneys who sensed that a lot of low-income people were getting snookered.

In 1996, Rivlin notes, a pair of Kansas City lawyers filed their first class-action suit against Credit Acceptance, which had gone public a few years earlier, on behalf of 14,000 Missourians, accusing CAC of “a host of infractions—from repossessing cars with improper notice to charging working-poor customers hundreds to thousands of dollars a pop in bogus fees and interest overcharges.” (Credit Acceptance settled the case more than a decade later by paying the delinquent borrowers $12.5 million and forgiving some $75 million in outstanding loans.)

There would be more lawsuits to come, from state attorneys general and individual car buyers alike. Rivlin interviewed one lawyer, Gary J. Pieples, who ran a free consumer clinic at the Syracuse University College of Law:

Half of his active cases fall into the category of improper auto-lending practices, Pieples told me, and most involve Credit Acceptance. It’s easy to blame the “fly-by-night dealers selling crappy cars for too much money to people who don’t have any other option,” he said, “but the dealers couldn’t be doing what they’re doing without money from outfits like Credit Acceptance.”

In September 2021, Maura Healey, the attorney general of Massachusetts, announced the largest legal settlement to date, in which CAC agreed to shell out $27.2 million and “provide debt relief and credit repair to thousands of Massachusetts borrowers.” More than 3,000 buyers were expected to be eligible. The deal also demanded that Credit Acceptance change its business practices.

In this latest salvo, the CFPB and New York legal complaint alleges that Credit Acceptance “hides costs in loan agreements and sets consumers up to fail.” It accuses CAC of violating New York state usury limits and other consumer and investor protection laws over which the CFPB has oversight.

The legal descriptions, however, don’t reflect the true suffering of the people who struggled under the yoke of the company’s subprime loan collections. Rivlin talked to Carrie Peel, a Missouri woman who was badly screwed over by a fly-by-night auto dealer, who first failed to provide her with the title to her vehicle and subsequently went belly-up. Without that title, she couldn’t even register the vehicle. But Credit Acceptance still insisted she pay off the full amount of her loan, and treated her very aggressively:

Credit Acceptance’s own records show that Peel spoke to 111 separate people in its call center over two years. Never once was she granted access to a supervisor, despite her pleas and the occasional promise of a callback. She felt helpless, she told me. Without a title, she couldn’t drive the car legally and she couldn’t sell it. And with her credit tied up in the Taurus, it’s not like anyone would loan her the money for another car. “I’m very, very polite,” she said. “I come from a good family. But I got pissed off. I got a little crazy a couple of times.”

One of those times came at work. “I was screaming, ‘I want a supervisor to call me back right now,’” Peel said. “I went damn near psychotic. People are looking at me. I’m crying.” She told the Credit Acceptance rep that she was done paying, knowing full well that if she stopped, she’d end up with a repo on her credit report. “I was trying to fix my credit, and here these people are telling me they’re going to ruin it if I don’t do what they say.”

Credit Acceptance has not yet issued any press release in response to the New York lawsuit. The company also refused to engage with a reporter writing a major profile on the company and its founder for this magazine. As Rivlin writes:

Since the 2008 crash, I’ve been fascinated by businesses catering to people on the margins, and by this depressingly visionary man who saw the untold billions to be made selling cars to people whom conventional lenders deemed too risky. I’ve spent time with the pioneers of payday lending, tax refund anticipation loans, and the rent-to-own business, but I’ve never received so much as a return phone call from Foss’ company—for this or any other story.