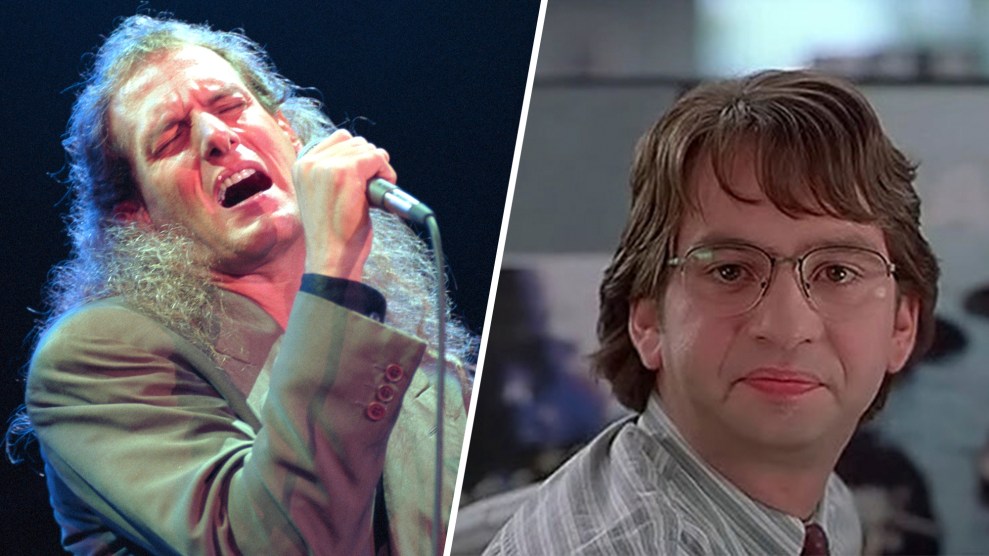 Today is the 55th birthday of David Herman, the actor, comedian, noted linguist, and assclownologist forever fixed in movie history for popularizing “no-talent assclown” and bestowing the title on Michael Bolton. The line is enshrined in American letters. It is a contribution so crucial that Bolton himself is cited in Merriam-Webster’s etymology of “assclown.”

The oldest dictionary publisher in the United States mentions his Office Space namesake to illustrate a “socially inept or stupid person,” but Bolton is gravely maligned. The singer is whip-smart. He is socially progressive, a champion of human rights. Yet there he is: “There was nothing wrong with [the name] until I was about 12 years old and that no-talent assclown became famous and started winning Grammys.”

Bolton has rolled with it, recording a remix, giving it a kiss, and moving on. Michael Bolton Charities’ 30th anniversary is coming up, and his birthday is this week. But today we mark the actor’s own birthday, for Herman too is a champion of human rights, raising funds for hunger relief and poverty alleviation in Los Angeles.

To revisit the role that fueled his career, which spans Bob’s Burgers, Futurama, King of the Hill, Disenchantment, Brickleberry, and MadTV, I spoke with him. Our fireside chat has been edited and condensed:

Mr. Herman, does the Dave/David choice matter as much to you as Mike/Michael did to Bolton?

No, doesn’t matter to me: Mr. Herman or Rev. Dr. Herman. Either one.

Dr. Herman, what’s the 2022 equivalent of the printer? What today would you destroy?

Non-fungible tokens? I don’t even know what they are. My 21-year-old son tried to explain them to me and I almost body-slammed him.

Mike Judge wrote that part with you in mind. His eye for talent and radar for social and political bullshit in the world are laser sharp. He heaps fresh ridicule on tech, media, and politics. If you share that sweet tooth for skewering, is there anything specific in the news right now that grinds your gears?

As far as I know, everything’s peachy these days. I mean, I guess if everybody names their child Wordle, there might be some confusion in the future.

As words go, I want Merriam-Webster to credit you for coining “assclown”—it cites Michael Bolton, not David Herman, but you wrote it into the script. Would you mind if I petition the dictionary’s editors to credit you? Knock myself out?

Why stop at the dictionary? Petition the atlas too. Rename the South Pole “Ass Clown” and make me king.

You once said you’ve never actually met Bolton. The pandemic hasn’t pulled you together in an overdue video chat for shits and giggles? I hear he’s not so self-serious these days, so who knows, might not be fun since he’s not easily offended. Would you consider it if he’s down? What’s the ideal hang?

Ideally he wouldn’t kick my ass. Yeah, that wouldn’t be ideal.

Madonna told Mike Judge, “That Michael Bolton guy is my favorite character. There’s something sexy about how angry he is.” To which you replied, “How am I ever going to tell people, ‘You know who’s into me? Madonna’?” As it happens, Madonna is holding auditions right now for her upcoming biopic. Got me thinking, if you collaborate, hypothetically, would you and Madonna join an interview about media and politics? If the opportunity arises?

I asked Madonna to do THIS interview with me. Her representatives have not responded.

Editor’s note: We also asked Madonna for an interview about Office Space. Her representatives have yet to reply. We also asked the real Michael Bolton. His publicist answered, “Thank you for extending the offer, we will have to kindly pass.”

Mr. Herman, Mother Jones is the longest-running investigative nonprofit newsroom in the country. Are there any causes or human rights stories you wish the wider media shined more light on?

Well, I can’t joke around about that, so this is probably a good spot for a plug: I joined Cameo around the time the pandemic started and I’ve been making videos to raise money for charity. All of my proceeds go to St. Francis Center Los Angeles. They provide food and comprehensive services to low-income and homeless individuals and families in the Greater Los Angeles area. You can find me on Cameo or Instagram @mr.davidherman. Also Lauren Tom, my friend and fellow cast member from Futurama and King of the Hill, and I raise money for Homeboy Industries. You can also go straight to St. Francis Center or Homeboy Industries and donate there and avoid me altogether. Also like to give a shoutout (I’ve always wanted to say that) to San Gabriel Habitat for Humanity. They do great work too and you can donate to them here.

Lauren Tom and you are teaming up in Futurama’s return with 20 episodes on Hulu, with Katey Sagal and many others. What draws you to the reboot?

I’d like to say it’s the amazing writers, animators, producers, and actors that draw me to the reboot, but it’s probably just the free lunch.

Reverend Herman, I do celebrate your catalog. The whole thing, consistently funny, sharp, creatively cathartic. Do you celebrate it equally or more your animated voice work than physical screen roles?

I’ve yet to celebrate my work. I suppose I could rent out a Moose Lodge and make Three Bean Casserole.

You and Artie Lange used to love Norm Macdonald when you were at MadTV and Norm was at SNL. Norm’s death hit hard, but he left a long trail of ways he wished to be remembered. I remember his underrated filthy pigeon in the animated Mike Tyson Mysteries. You ever talk shop with Norm?

Only met Norm once. It was on the set of his sitcom The Norm Show. Didn’t talk shop. We talked about I Love Lucy. Made him laugh with my Fred Mertz. Took it as a personal triumph. He was a true comedy great.

As are you, Dr. Herman. Happy birthday.