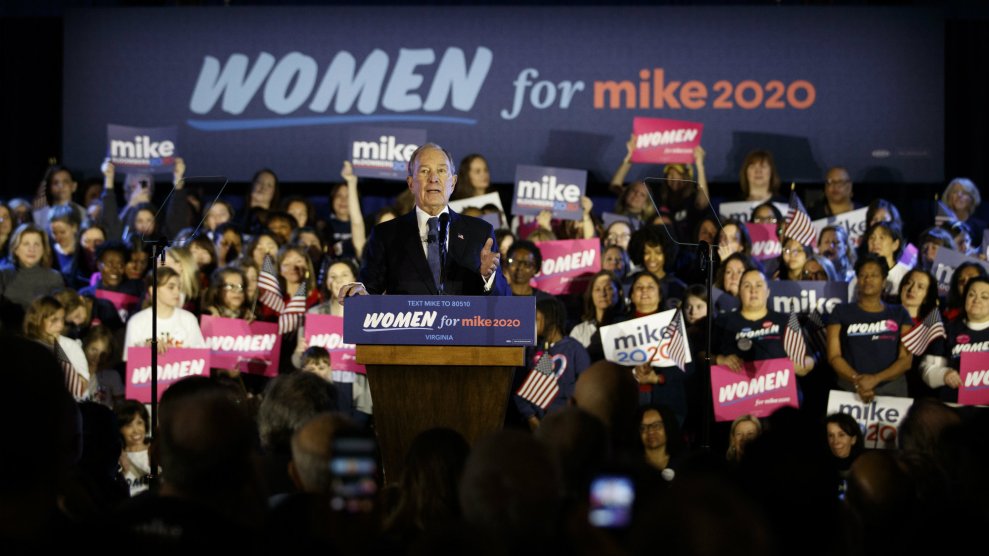 Michael Bloomberg, the billionaire politician who is throwing an ungodly amount of money into his own presidential campaign, wants people to know that he supports women. “Good morning, Women for Mike! I’m Mike for women!” the former New York City mayor said, kicking off his “Women for Mike” campaign event in McLean, Virginia, on Saturday, four days before the state votes in one of the 14 Super Tuesday primaries. And there are other things Bloomberg’s campaign wants his supporters to know about him. Prior to Bloomberg speaking, jumbo screens around the stage flashed a slideshow of  facts one might not know about Mike: His favorite color is maroon. He is left-handed, like Lady Gaga, Barack Obama, Leonardo DaVinci, and uh, Napoleon. He once lost a fight to a groundhog. And he once acted on TV opposite Miss Piggy.

Flanked by a riser packed with dozens of supporters—all women—more than a dozen of women gathered on stage to introduce Bloomberg and say great things about him. These weren’t campaign volunteers who were paid to be there; rather they were women who have worked for Bloomberg for decades. Led by Fatima Shama, Bloomberg’s national director for women’s outreach who served in his administration when he was mayor, these women had a clear message to Bloomberg’s supporters: He has a proven record of supporting women.

It’s a message Bloomberg is really, really hoping will catch on. After weathering two brutal beatdowns in as many debates from Sen. Elizabeth Warren (D-Mass.) for his long record of sexist comments and for his use of non-disclosure agreements to muzzle former employees, Bloomberg is doing all he can to repair his image among women voters. He’s since released three women from their NDAs specifically related to comments he allegedly made (though he hasn’t done anything about NDAs that might’ve concerned allegations against his company more generally). And in his speech on Saturday, he went straight for Trump on the issue of women’s rights. “Under this president, so many values I hold dear are at risk, because President Trump has attacked women and women’s rights from the moment he swore the oath of office,” Bloomberg said. “And he threatens women’s health and women’s safety through his policies and his judicial appointments.” He pledged to fight for women’s health and rights on his first day in office “with the goal of insuring that every woman has access to reproductive healthcare.”

The pitch certainly resonated with the people I spoke with at the rally, who brushed off Bloomberg’s record of sexist comments, telling me that they’re voting for Bloomberg because they think he’s the only candidate with the money to take down Trump. “All we want is a strong candidate who can defeat Trump. That’s all we want,” María Luisa Wright, a Virginia voter who had previously supported Joe Biden, told me. Her husband, Devon Wright, chimed in to say that Bloomberg’s money could scare Republicans into supporting campaign finance reform, especially after his financial contributions to the Old Dominion state helped flip the state legislature blue. “Mike can bury the entire Republican party in money and suddenly they’ll find religion on campaign finance reform,” he said.

Another woman I spoke with—who wished to remain anonymous because she is a federal worker—told me she had previously supported Warren but found her attacks against Bloomberg and the other nominees too divisive. “How is she going to unite the country, middle America, when she’s fighting with other Democrats?” the woman told me. With four days until Virginia’s primary, Bloomberg is trailing Biden and Sen. Bernie Sanders (I-Vt.).

Bloomberg, who once allegedly told a pregnant employee to “kill it,” left the stage with a simple message for supporters: “If you are ready to once again have a president who supports and empowers women, and if you are ready to have someone in the White House who doesn’t attack women’s rights but instead fights for them using the full power of the presidency, then welcome to Bloomberg 2020.”