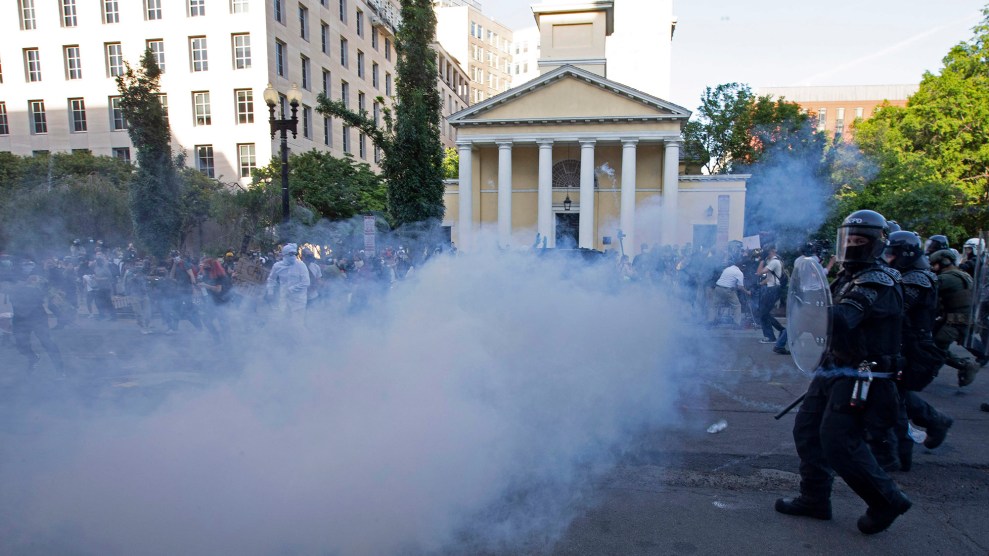 "Pepper spray is not a chemical irritant. It's not chemical" — AG Barr uses painstaking distinctions to defend the use of force against protesters near the White House last Monday pic.twitter.com/CQbtqLwfIk

Appearing on CBS’s Face the Nation, Barr was asked whether he thought it was appropriate for Park Police to fire pepperballs, smoke bombs, and other projectiles at peaceful protesters at Lafayette Square Park before President Trump posed with a bible in a photo op outside of St. John’s Episcopal Church. Barr denied that the protesters were peaceful, calling that one of the “big lies that the media seems to be perpetuating.” Moderator Margaret Brennan told Barr that three of her colleagues who were at the protest had not seen protesters acting violently.

Barr told Brennan that he approved a plan on Monday afternoon to “increase the perimeter” at Lafayette Park and “push it out one block.” He added that he did not know the president would speak from the Rose Garden that day so his approval of National Park police clearing the park before Trump made his way to the church had, in his eyes, nothing to do with the photo op. Then, Barr insisted that no chemical irritants were fired in the clash between protesters and park police, whether it was pepper spray or pepperballs.

Apparently, Barr wasn’t familiar with the Department of Justice inspector general’s description of pepper spray and pepperballs as “chemical agents.” Or that pepper spray is made with capsaicin, the same chemical irritant found in chiles; pepperballs contain a synthetic form of capsaicin.

The Department of Justice.

The active ingredient in pepper spray is capsaicin. The same chemical irritant found in chilies.

I’d ask those denying it is an irritant to try Tabasco eyedrops (0.01% the strength) to prove their point*. https://t.co/CHseqAmsW5

Barr’s attempts to cloud the issue were the latest by the Trump administration to turn its handling of last Monday’s presidential stunt into a semantic game. As my colleague Daniel Moattar wrote:

You’ll be happy to hear the Trump campaign has contacted us in a snit. They say the Park Police did not use tear gas—they simply used “smoke canisters and pepper balls.”

Here are the facts: Park Police used tear gas to clear out peaceful protesters so that Donald Trump could fumble a Bible in a lame photo op that disgusted everyone, including the actual clergy of St. John’s—and Pat Robertson. The lying press reported what they saw: that the tear-causing gas was, in fact, tear gas.

The distinction only matters if you’re treating medical damage or covering your ass; the Centers for Disease Control calls every such chemical “tear gas,” including CS, OC, and others. But for police, “pepper balls”—dense projectiles containing OC, which the Park Police insist they used—are very convenient. They can be fired again and again from a gun. They hurt. (In fact, they hurt worse than CS gas.)

And, funny enough, the company that makes pepperballs calls it “the most effective chemical irritant available.”

"Pepper spray is not a chemical irritant. It’s not chemical.” —Attorney General Bill Barr on @FaceTheNation.