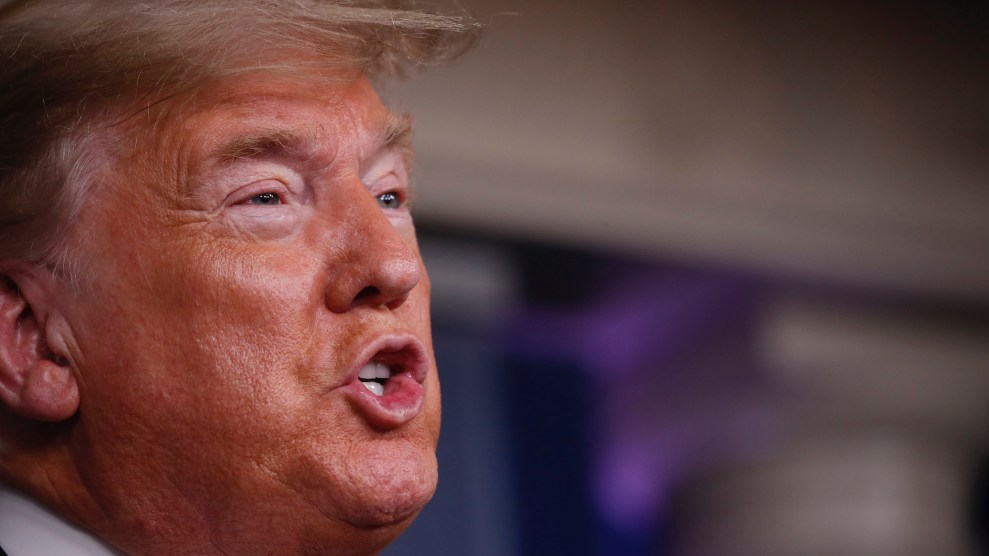 “I don’t believe you need 40,000 or 30,000 ventilators,” Trump told Hannity. “You go into major hospitals sometimes, and they’ll have two ventilators.”

By Friday morning, the tune and the villain had changed. Ventilators were now a priority, the President tweeted, while slamming General Motors for not producing what he said they promised.  The automobile manufacturer had been working to strike a deal with the administration to build thousands of ventilators. In a tweet, Trump criticized the company and its chief executive, Mary Barra, for sluggishness, while appearing to invoke the Defense Production Act, the federal law that can be used to compel manufacturers to expand the production of essential materials:

As usual with “this” General Motors, things just never seem to work out. They said they were going to give us 40,000 much needed Ventilators, “very quickly”. Now they are saying it will only be 6000, in late April, and they want top dollar. Always a mess with Mary B. Invoke “P”.

Minutes later, in a second emphatic tweet, Trump demanded that General Motors revive a shuttered Ohio automobile factory that it had sold to another car company more than a year ago.

General Motors MUST immediately open their stupidly abandoned Lordstown plant in Ohio, or some other plant, and START MAKING VENTILATORS, NOW!!!!!! FORD, GET GOING ON VENTILATORS, FAST!!!!!! @GeneralMotors @Ford

General Motors’ plans to open up production of ventilator masks had been weeks in the making. Though, according to reporting from Bloomberg, delays were caused by the administration, not the car manufacturer:

GM was growing exasperated with the Trump administration because after more than a week of around-the-clock work, the carmaker and Ventec had turned an auto-parts plant in Kokomo, Indiana, into a near-ready ventilator-assembly facility. Suppliers are secured for the 700 components needed to make the machines. The automaker has even started hiring because the 300 workers on staff won’t be enough to handle the proposed volume, a person familiar with the situation said.

In fact, the Trump administration was planning to announce the partnership on Wednesday, but negotiations on pricing fell through, according to the New York Times, “after the Federal Emergency Management Agency said it needed more time to assess whether the estimated cost was prohibitive.”

Meanwhile, General Motors is already positioning itself to “GET GOING ON VENTILATORS, FAST.” It just needs the administration to decide whether it actually wants to pay for them.