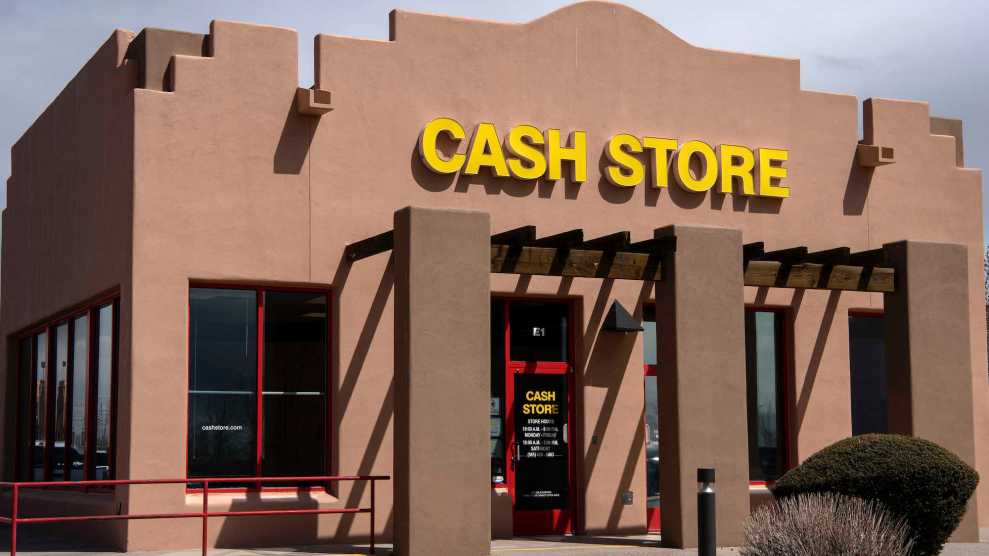 This Cash Store outlet in Albuquerque, New Mexico, is open during the COVID-19 pandemic.Eddie Moore/Albuquerque Journal/ZUMA

In response to the coronavirus pandemic, more than 20 states so far have shuttered nonessential businesses—and, like clockwork, an increasingly unlikely parade of corporations is claiming to be essential. The latest is Cash Store, a “payday loan alternative” chain that has classified its more than 100 locations in Illinois, Michigan, New Mexico, and Wisconsin as essential businesses. All four states have issued shelter-in-place orders—but at Cash Store, life goes on.

Some states’ essential business lists, like Illinois’, do include “banks and financial institutions.” But payday loan shops aren’t considered financial institutions—in fact, at least one circuit court has specifically held that they’re not. Still, Cash Store has declared that it’s staying open as an essential financial service, meaning all of its storefronts are staffed and open regular hours—including for borrowers who want to “invest funds for both long and short periods” or “transfer financial risks between customers.”

Payday lenders are notorious for finding customers in tough spots and leaving them in worse ones. Rollovers, deceptive ads, and unrealistic repayment schedules push desperate borrowers into debt traps, where many pay thousands of dollars in interest on a few hundred in loans—and still wind up in bankruptcy. Borrowers take out new loans so they don’t default on old ones; according to a Pew Charitable Trusts report, paying off an average payday loan “requires about one-third of an average borrower’s paycheck, not leaving enough money to cover everyday living expenses without borrowing again.” They’re likely to borrow for critical needs: California’s Medicaid expansion cut payday loans by more than 10 percent, a 2017 Health Affairs study found. And payday loan “alternatives,” like car title loans, often end in repossession.

But it’s an incredibly lucrative industry: Short-term borrowers—i.e., broke people with bad credit—paid more than $60 billion in fees and interest in 2015. Things got worse with Donald Trump’s rollback of Obama-era consumer protections, along with his gutting of the one federal agency built to fight predatory lending.

Cash Store is the retail face of Texas-based Cottonwood Financial, a major player in retail lending that spent more than $50 million on advertising in the 2000s alone. Cottonwood CEO and President Trevor Ahlberg (also an enthusiastic big-game hunter, according to a detailed investigation by the Texas Observer) has donated more than $1 million to conservative causes, and thousands to Trump-supporting PACs—and he’s far from alone in the industry. As early as 2013, Texans for Public Justice found that Ahlberg was “by far, the most politically active payday lender,” according to D Magazine.

Cottonwood’s Better Business Bureau page is a litany of complaints (and often form-letter responses) from consumers who claim they were asked to pay the same debt, or parts of it, multiple times; that Cash Store made unauthorized direct withdrawals from their checking accounts; and, from one employee identifying as a benefits specialist, that Cash Store said it wouldn’t add her young child to her employer health insurance without a court order. (Cottonwood replied, acknowledging that it had eventually added the kid.) In its own backyard of Texas, Cash Store’s practices appear to work around local laws that limit loan amounts and installments, the Observer reported.

It’s not immediately clear why Cash Store would keep hundreds of brick-and-mortar stores open. Many payday lenders offer online cash advances, including through apps you can access by phone. Some claim to remotely deposit your funds in minutes. And if you want to give Cash Store your money from home, no problem: You can make a loan payment by phone, by mail, or electronically, per its coronavirus webpage. But need to borrow some cash? You’ll have to head in. Unlike some competitors, Cash Store will only take money remotely, not hand it out, despite the evidence that small cash loans can be approved remotely. That means thousands of workers are coming in to hundreds of stores, helping Cottonwood collect debts—at the cost of exposure to COVID-19.

Cash Store’s website claims that it has “implemented additional cleaning and disinfecting protocols” and sent its stores “extra cleaning supplies to increase health safety.” Their blog features multiple COVID-related posts: “We decided to fact-check some of the top coronavirus-related stories, to help you see past the stigma and get to the point!” one says. Another offers laid-off job seekers a list of companies now hiring, from CVS to Papa John’s—after all, you can’t get a payday loan with no payday. With 5 million or more jobs on the chopping block in March alone, Americans will need money in the months ahead. But the typical requirement for a payday loan is a regular income stream, and sweeping job losses could mean trouble for payday lenders.

If Cash Store risks losing business, why stay fully open? One clue: Americans hold about $10 billion in outstanding payday loans. Many borrowers default on high-interest loans, and shops like Cash Store work that into their model; Cottonwood Financial sells its unpaid debt to collectors for pennies on the dollar. But third-party debt collectors are about to get more business than they can handle, most of it better than payday loans—so ultra-high-interest lenders had better collect what they can, while they can. “At this point, we are a glorified collection agency,” one cash advance lender wrote on Facebook. On social media, small lenders are racing to collect from individuals and small businesses, swapping stories about funders who won’t help them lend more, but who still expect their money.

Unlike small-fry independent lenders, Cottonwood isn’t beholden to anyone. The firm bills itself as “one of the largest privately held” retail lenders in the country; it’s cash-rich, boasts zero debt, and risks much less by closing some or all of its 300-plus stores. Even if they were laid off, front-line workers at Cash Store could collect expanded unemployment benefits under the CARES Act; instead, they’re risking COVID-19 for the sake of Cottonwood’s investments. (Cottonwood didn’t respond to requests for comment.)

Other types of lenders are offering breaks on the high interest and short deadlines of most cash advances. U.S. Bank has cut rates on its short-term cash loans, which it touts as a payday loan alternative. Barclays is waiving fees on (usually expensive) credit-card cash advances. Cash Store, meanwhile, is offering borrowers hit by the tidal wave of shutdowns and layoffs a chance to…borrow again. A web FAQ for the business says you can score a “cash back refinance” on your payday loan “alternative”—but that you “still need to visit your local Cash Store in order to complete the loan agreement.” Luckily, if you’ve already paid off a Cash Store loan, you’re preapproved for another.

In fact, the nation’s five biggest banking and finance regulators have unanimously pushed banks and credit unions to offer serious payday loan alternatives during the coronavirus crisis—cheaper alternatives, not equally pricey loans in a slick wrapper. Even borrowing with your credit card, if you have one, could cost less in interest and won’t force you into a store.

Cash Store isn’t the only shop staying open in the dubious guise of an essential service. GameStop, Guitar Center, and Hobby Lobby have also informed Americans that we can’t live without them. Joann Fabrics and Crafts, borrowing from Thoreau, initially defied state orders to shut down, although it’s now giving away make-your-own-mask kits for Good Samaritan seamsters. And some have tried to make an extra buck in the crisis: The hardware chain Menards was ordered last week to quit jacking up prices on cleaning supplies and masks. States have seen a rash of price-gouging complaints, and the cost of protective gear has soared among online retailers.

Do you have other examples of companies refusing to shut down despite better judgment, cutting corners on safety, or just plain profiteering? Help Mother Jones track corporate cash grabs during the pandemic with an email to scoop@motherjones.com. If you can, include photos, links, or documentation.