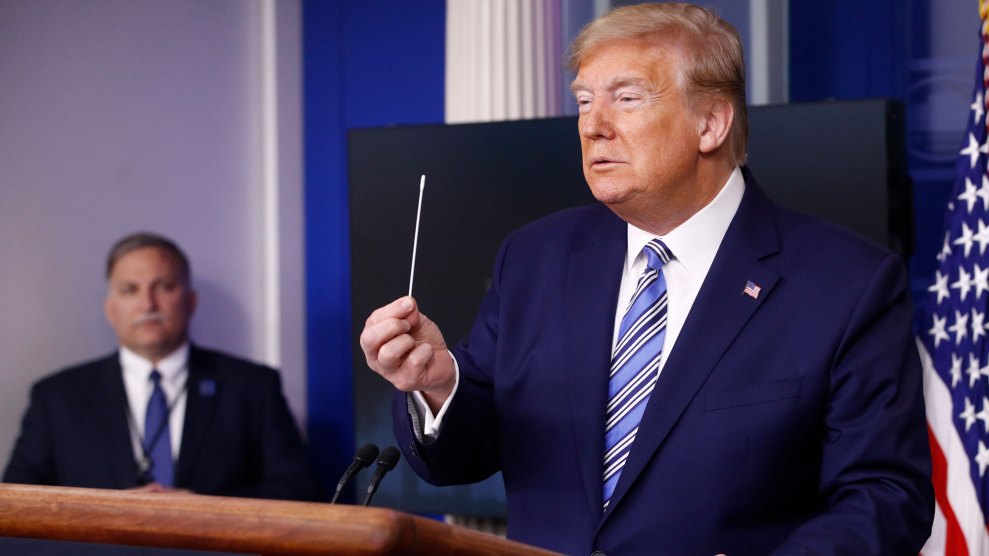 Near the start of his Sunday coronavirus briefing, President Donald Trump waved around a swab and a Q-tip and described how they were different from one another. (It wasn’t the weirdest part of the briefing.) They were visual aids to help him transition into praising his administration for conducting 4.18 million total coronavirus tests—more, he told the assembled reporters, than the United Kingdom, France, Sweden, South Korea, Japan, India, Austria, Singapore, Australia, and Canada had conducted combined.

Trump says 4.18 million people have been tested. He claims, again, that testing is expanding "rapidly" and "by millions and millions of people." (We've heard this stuff a lot from the Trump team and it keeps not happening.)

Trump on testing: "It should be a local thing," but "we're helping them a lot," and we want to help them "more than a lot," if you think about it.

As much as Trump would like you believe otherwise, that isn’t actually all that great. As Vox recently pointed out, the United States still lags behind countries like South Korea, Italy, and Canada in the number of COVID-19 tests conducted per million people. The US conducts 12,736 tests for every million people; by comparison, Germany leads the pack at 20,874 tests per million.

Covid-19 tests as a proportion of the population, selected country rankings:

As long as President Trump continues to lie about this, heres the list of countries who have done more per capita COVID19 testing than the USA. I’ve ordered the countries by tests per million inhabitants. Far right column. Check marks by large countries. pic.twitter.com/GZg6BBVToA

What’s more, public health experts have insisted widespread testing is necessary to get a better gauge of how widespread the coronavirus is nationwide. And Harvard researchers recently found that the country’s daily testing needs to triple by mid-May for the country to safely reopen.

As Trump vaguely proclaims everything great on testing, the fact is that there are widespread shortages and other impediments, as confirmed by politicians of both parties, and that the US is nowhere near the level most experts say is needed for a safe lifting of restrictions.

Trump wasn’t the only administration official talking up the testing numbers Sunday. Earlier in the day, Vice President Mike Pence went on the morning talk show circuit to say that the 150,000 COVID-19 tests conducted daily were “sufficient for any state in America” to begin lifting restrictions and called on states to activate their labs for more testing.

Pence’s optimism encountered significant pushback from governors on both ends of the aisle on Sunday. “To try to push this off, to say that the governors have plenty of testing and they should just get to work on testing—somehow we aren’t doing our job—is just absolutely false,” Republican Maryland Gov. Larry Hogan told CNN. And Democratic Virginia Gov. Ralph Northam slammed the idea that states have enough testing capacity as “just delusional.”