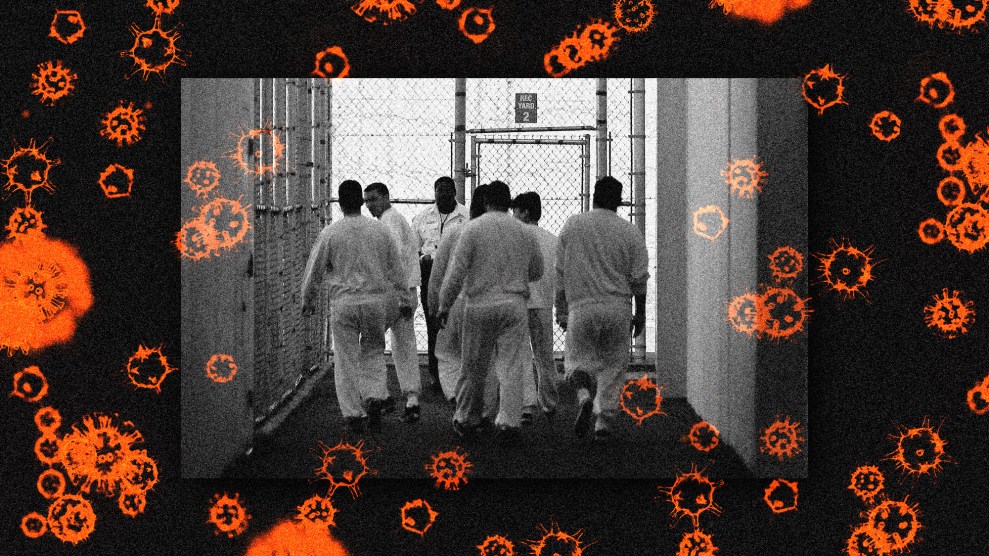 John still remembers the panic that gripped him when he first learned about the coronavirus. Detained at the Otay Mesa immigrant detention center in San Diego—with no access to masks or gloves and unable to practice social distancing—the asylum seeker from Cameroon knew he was vulnerable.

“Everyone was scared. We knew at any moment anything can happen,” said John, who is using a pseudonym to protect his identity. “If an officer came in with the disease, it was going to finish all of us.”

At the time, John had already been in detention for about five months. After fleeing violence back home, he had journeyed across South and Central America to seek asylum at the US border. He was taken into Border Patrol custody and sent to Otay Mesa, which quickly became the epicenter of the virus within the immigration prison system; to date, there have been 158 confirmed cases of COVID-19 at the facility, including the first person to die of the disease in ICE detention, a 57-year-old Salvadoran immigrant named Carlos Ernesto Escobar Mejia.

For John, the coronavirus only intensified his urgency to get out of detention as soon as possible. But first he’d have to post bond, the immigration detention equivalent to bail. Through a Catholic Charities legal services hotline, he had been connected to a pro bono lawyer, and eventually, in early March, an ICE deportation officer offered John the chance to be released on a $10,000 bond. If he couldn’t come up with the money, he’d be stuck inside, quarantined among an increasingly sick population at Otay Mesa.

“It was very stressful,” John said. His brother-in-law in Virginia was preparing to take him in, he said, but the $10,000 bond was too much for him to pay. “I had to cry out, I said, ‘Why me? I’ve been given this parole, but it’s this huge amount of money.’”

“Why me? I’ve been given this parole, but it’s this huge amount of money.”

Like John, a majority of ICE detainees are eligible for release on bond while their cases move through the courts. Less than half of those who get bond hearings, however, are actually granted bond; as of March of this year, the national median granted bond was $8,000, but that number can easily go up to $40,000 in individual cases—an impossible sum for many immigrants to raise.

As the coronavirus has wreaked havoc in detention centers, local aid groups across the country have mobilized to help as many immigrants as possible post bond. For years, these community bond funds have stepped in with donations to help immigrants get out of detention. Like their counterparts in the criminal system that raise funds for pretrial bail, bond funds generally grow out of informal, local grassroots networks that raise bond money. But they’ve also come to form part of a nationwide fabric of volunteers, lawyers, and activists working to get people out of detention and support them after release.

Lee Wang, a former director of the New York Immigrant Freedom Fund, which has spent roughly $3 million since 2018 to release more than 400 people from New York and New Jersey detention centers, told me that before the pandemic hit they raised most of this money through foundation grants and public interest loans. Now, they rely almost entirely on grassroots fundraising, and they’re running out of money.

“Once COVID hit, it transformed everything overnight into an emergency campaign to free people for public health,” Wang said. “We’ve been able to keep paying bonds, but every week is a scramble and we will never have enough to free everyone who needs to get out.”

“We’ve been able to keep paying bonds, but every week is a scramble and we will never have enough to free everyone who needs to get out.”

In the past few months, they’ve helped release nearly 60 people, double their normal rate. To meet with this increased demand, Wang has increasingly had to call on the National Bail Fund Network, 69 groups across the country that post bond and bail for people in the criminal and immigration detention systems. Normally, each fund raises and spends money within a local region, but they’ve had to do more cross-country coordination as individual funds scramble to get people out.

Even with continued fundraising and pooling different funds, the NBFN isn’t able to meet all the requests. “We’re zeroing out over and over again,” said Pilar Weiss, the network’s director. “As money comes in, it gets spent out.”

A parallel informal network exists within detention centers like Otay Mesa, as detainees share the phone numbers of people who might be able to help with bonds. That’s how John connected with NBFN, and his case ended up on the desk of Ana María Rivera-Forastieri, co-director of the Connecticut Bail Fund. In early April, she contacted John’s family members, who were waiting to receive him in Virginia, to let them know the network had raised the money and was going to post his bond.

But John’s detention nightmare was far from over.

Rivera-Forastieri went to an Enforcement and Removal Operations bond office in Hartford, Connecticut, on April 8, prepared to post John’s bond, only to be told by the ERO officer that there was no bond order for him. “We knew that wasn’t true,” she told me. “It’s hard to get ahold of these bond orders, especially during this time.”

Working with John’s lawyer in California and his family in Virginia, Rivera-Forastieri gathered the necessary proof of the bond order when she returned to the ERO office two days later. This time, however, they told her that John would not be released because he was in “quarantine hold.”

This time they told her that John would not be released because he was in “quarantine hold.”

John told me that two people in his unit began showing symptoms of COVID-19 around this time, so the rest of the men in the dorm were quarantined together for 14 days in keeping with ICE’s policy of “cohorting” detainees exposed to the disease. (Cohorting goes against recommendations from the CDC and health experts, who have likened the policy to torture, saying that it can create a chain of infections, while also causing undue anxiety among detainees.)

ICE and CoreCivic, the private prison company that runs Otay Mesa, both confirmed this cohorting policy and maintain that efforts to contain the spread of COVID-19 are in accordance with federal guidelines.

“We asked when quarantine was over,” Rivera-Forastieri said. “But [the ERO officers] didn’t know anything. They said we ‘simply cannot post’ but didn’t give us any information.”

They found out from John that his quarantine would end on April 13. When Rivera-Forastieri went back to the ERO office to post bond, she again was turned away. This time, she was told, John had tested positive for COVID-19. He told me, however, that he was never sick, and while his temperature was taken regularly, he was never tested.

All the roadblocks and the dizzying relay of information between San Diego, Hartford, and Virginia began to take a toll. “It really penalized me,” John said. “They couldn’t pay, I had to stay here, and nothing was moving.”

“I felt a little paralyzed when all this was going down,” said Rivera-Forastieri, who doesn’t have many connections in San Diego—which meant John had to constantly update the various parties on his status from inside detention.

She was told that John had tested positive for COVID-19. He told me, however, that he was never sick, and while his temperature was taken regularly, he was never tested.

What’s worse is that all of these repeated trips to the ERO office wouldn’t have been necessary had ICE simply opened up its online “eBonds” system for making payments remotely to individuals and family members. But as of this month, it was still only open to for-profit bond companies. On April 1, the Congressional Hispanic Caucus wrote a letter to DHS requesting that this system be opened up to individuals and families, but so far no change has been made.

With every false start, Rivera-Forastieri had to organize—and then call off—a team of people who’d been put in place to help him get to his family after being released. These volunteers offer rides, shelter, and basic provisions for migrants as part of NBFN’s post-relief support. It’s another aspect of their work that has had to adapt to the new reality created by coronavirus, said Elizabeth Nguyen, who coordinates these efforts nationwide.

The danger of the pandemic has only served to highlight the urgent need to fix a system that is both riddled with red tape and is also, according to advocates, wildly arbitrary. That’s the latest argument the New York Civil Liberties Union is making in its lawsuit against the Justice Department over what it sees as unconstitutional bond practices that place an extraordinary burden of proof on migrants and unfairly detain people without consideration of alternatives, like ankle monitoring or community supervision programs, that have been proven effective. The case focuses on two immigration judges in Buffalo and Batavia, New York, who have denied bond in 95 percent of their cases. “This whole pandemic just highlights how the public interest isn’t being served by detaining people unnecessarily,” said Megan Sallomi, one of the attorneys on the case.

After many starts and stops, John’s case came to a head on April 23, when Rivera-Forastieri finally was able to post bond (which, at the 11th hour, was reduced to $5,000) in Hartford. John was subsequently released from Otay Mesa—roughly a month after the bond was first granted. By the time he crossed the threshold of the prison, NBFN post-release support had a ride (and a mask and hand sanitizer) waiting for him, lodging booked at a nearby hotel, and a plane ticket to rejoin his family in Virginia.

I spoke to John again recently, after he had been out of detention for a month. He sounded much more at ease, and glad to be with his family.

For the moment, he’d found what he’d been seeking when he set out for the United States: a sense of safety. He still had a long way to go to getting sustainable protection, but this was a hard-won battle—one he was determined to overcome.

“Even those who were ready to give up their case, everyone was fighting his way to get out of detention,” he said. “We were going to fight our fight.”