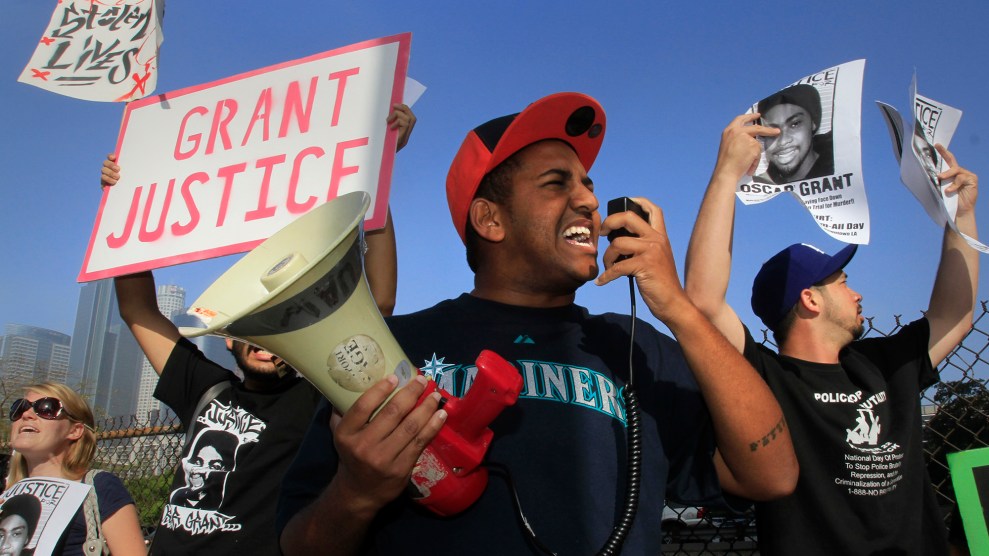 In the early morning hours of January 1, 2009, a 22-year-old black man named Oscar Grant sat on the floor of Oakland’s Fruitvale BART station in front of two Bay Area Rapid Transit officers. There had reportedly been a fight earlier, and a group of officers had pulled Grant and his group of friends—all of them men of color—off the train to question them.

You probably know what happened next, which was captured by dozens of passengers’ smartphones: Grant, seemingly agitated at having been detained, points to something or someone off in the distance, as if to suggest that it’s proof of his innocence. Then he stands up to make his point further, which turns out to be a fatal mistake, as the officers immediately try to subdue him. At one point, officer Johannes Mehserle throws Grant onto his stomach and holds his hands behind his back. Then Mehserle reaches into his holster. He’d later argue in court that he meant to grab his taser. But he took out his gun instead, and shot one bullet into Grant’s back. Grant died seven hours later at a nearby hospital.

You could not only see what happened, but hear the gunshot echo through the station. You could feel the shock of a train filled with passengers looking on, the ohh! after the gun went off.

That moment was a turning point that set the stage for the ensuing decade, the one we can now fucking finally say goodbye to. And before you clamor, but Grant’s death was more than a decade ago!—I know. But I also know the activism it sparked became the template of what was to come over the following decade: People uploaded video of the shooting to social media, or gave it to local news. BART spokespeople worried aloud about public sentiment ruining its investigation, while witness videos proved much too compelling to brush the horrific incident under the rug. You could not only see what happened, but hear the gunshot echo through the station, the chaotic yelling and chatter that proceeded it. You could feel the shock of a train filled with passengers looking on, the ohh! after the gun went off.

The violence wasn’t new. Neither was the organizing that followed. What was different was the way the organizing happened, the way our indignation was sparked.

When we saw Grant’s death, we couldn’t know how many more videos we’d be forced to see, how many would be burned into our psyches. While technology had long been a tool for protest, dating back to the invention of the printing press, never before had there been a way to so quickly and efficiently counter the official narrative of police-involved shootings. Suddenly, you could quickly gather similarly outraged viewers and point them toward a way to express that anger.

In Oakland, that anger fueled months of protests, rallies, and sometimes violent clashes with police in the city’s downtown. Grant’s family, their allies, and activists demanded that Mehserle be charged criminally in Grant’s death, and he was eventually, in November 2010, convicted of involuntary manslaughter, serving 11 months in jail. They also demanded effective, community-led police oversight committees; access to reliable information about the frequency of officer-involved shootings; more effective de-escalation training for officers; and, eventually, an abolition of policing as an institution altogether.

Those demands sound familiar now, since they and new formal organizing grew directly out of the lingering fallout from Grant’s death. The Anti Police-Terror Project started dispatching first responders to the scenes of police shootings. Occupy Oakland, an offshoot of Occupy Wall Street, began to link the violent displacement of mostly people of color during the the foreclosure crisis to the violent policing of Black and Brown bodies in rapidly gentrifying neighborhoods. And later, Black Lives Matter, which took root in the aftermath of George Zimmerman’s acquittal in the murder of unarmed teenager Trayvon Martin in 2012, organized groups around the globe to respond to local issues with a broader focus. Campaign Zero sought to track and advocate for use of force policies nationwide.

It’s easy to think of these as individual, unrelated moments, but they were always connected. And while it’s nearly impossible to tell the story of a movement, a collective of people motivated by individual experiences, in any definitive way—their goals, methods, and solutions were different—what they did share were tools, powered by the the internet and social media.

People captured outrageous abuses of power on video and shared them with friends and strangers on social media. There were no gatekeepers, just platforms (though this would eventually prove to be a problem, as reported on by my colleague Ali Breland and others). But this allowed for proof of what Black people had been arguing for years: They were gunned down for minor traffic violations (Philando Castile, Falcon Heights, Minnesota, 2016); while walking home with bags of candy (Trayvon Martin, Sanford, Florida, 2012); for playing their music too loud (Jordan Davis, Jacksonville, Florida, 2012); for hawking CDs (Alton Sterling, Baton Rouge, Louisiana, 2016); choked to death for selling cigarettes (Eric Garner, Staten Island, New York, 2014).

A whole economy was emerging around Black death—films, albums, TV shows. Some were excellent, sure, but what did it mean to be a Black person living in America? Death fueled implicitly or explicitly by the state was only half of the equation.

As a young reporter at the turn of the decade, I saw this technological transformation firsthand. I covered the rallies at Fruitvale Station where young Black people wore signs that read, “I Am Oscar Grant.” I chronicled the rise of Black Lives Matter, and followed the elected officials—like Jordan Davis’ mother, now-US Rep. Lucy McBath, whose campaign was rooted in a call to end gun violence. In 2016, after video of  Sterling’s and Castile’s deaths emerged in the same week, I was exasperated enough to write a cheeky list called “23 Ways” that gathered all the seemingly mundane actions that, if you’re Black, could lead to death. It went viral, catching the attention of a group of celebrities who repurposed it in order to bring even more attention to the issue.

There was an emptiness to the moment. A whole economy was emerging around Black death—films, albums, TV shows. Some were excellent, sure, but what did it mean to be a Black person living in America? Who were these people whose names had become immortalized? Death fueled implicitly or explicitly by the state was only half of the equation. I savored small details. Before he died, Trayvon Martin wanted to fly. Philando Castile knew the name of every student who came through the cafeteria where he worked. A quintessentially Southern boy, Jordan Davis’ favorite hat inexplicably repped the NBA’s Portland Trail Blazers.

It all also kept leading me back to Oakland, to Oscar Grant. In 2013, Oakland native Ryan Coogler made his directorial debut with Fruitvale Station, a fictionalized account of that fateful encounter on the train platform. This film bridged the gap between that emptiness, that emerging economy, with a hopefulness about everyday life. It re-played Grant’s last day of life, as he made his way around his working class suburb of Hayward and into San Francisco to celebrate the New Year. He fought with his girlfriend, went to his mom’s birthday party. What made the film so powerful was that it didn’t try to make Grant into anyone’s martyr. He was imperfect, just trying to do better. He hadn’t yet posthumously sparked a movement to end police violence. He lived an ordinary life, like all of us.