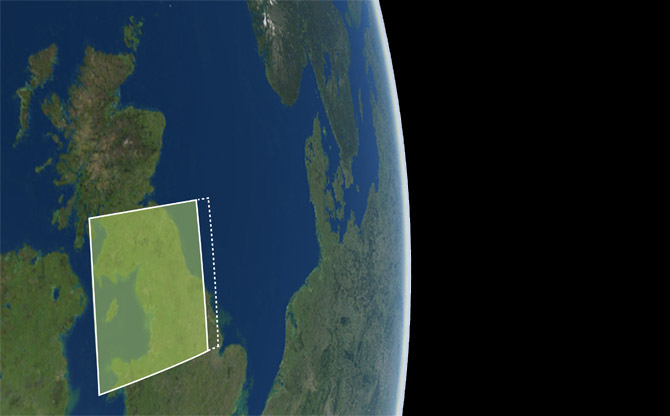 The Committee on Climate Change (CCC) report, with the hairy-sounding title “Statutory Advice on Inclusion of International Aviation and Shipping,” says that in 2050, the UK’s emissions reductions across the whole economy will cost 1 to 2 percent of the total GDP. This updates, in greater detail, the range predicted half a decade ago by the watershed Stern Review.

Just how much is that? For a rough comparison, 1 percent of the UK’s 2011 GDP is a little more than what the country currently spends on public housing and community amenities and is no where near the big-ticket public spending items like health care.

The United Kingdom has enshrined in law an emissions reduction of 80 percent on 1990 levels by 2050.

“It’s a very compelling economic case to act,” says David Kennedy, CEO of the CCC, an independent statutory body charged with advising parliament on all things climate. “You don’t need radical behavior and lifestyle change to achieve our climate objectives.”

“It’s a very, very small impact on growth. And what you get for that is a whole range of economic benefits.”

This table from the report details the cost in 2050 of meeting emissions reductions in a few different scenarios, including if fuel prices are high or low: 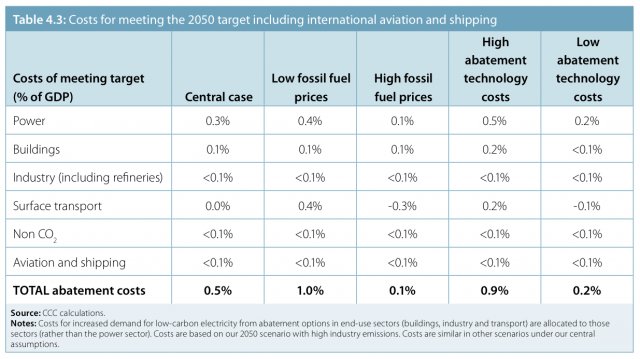 The Committee on Climate Change (UK)

The report says that cost is not an impediment, even when factoring into the mix international aviation and shipping, two sectors that have previously been left out of the UK government’s carbon budgets.

Cost is a familiar argument against climate action for US readers. As president, George W. Bush refused to ratify the Kyoto Protocol, calling it a job killer that placed unfair economic burdens on the United States while letting poorer countries off the hook. And in Congress, the ill-fated cap-and-trade bill of 2009 fell victim, in part, to arguments that consumers would foot the bill by paying more for electricity. The Heritage Foundation said cap and trade could raise the average family’s annual energy bill by $1,241. House Republicans called it “a light switch tax that would cost every American household $3,128 a year,” a statement that has been widely disputed.

But Kennedy says talk of economic meltdown is wrong. “They talk about the economy being closed down, about an ‘end to growth,'” he says. “Well, that is frankly nonsense, and the debate should be around the correct number.”

The cost in GDP terms in the UK report echoes what US studies have found. The Congressional Budget Office reported similar reductions would reduce the GDP here by 1 to 3.5 percent in 2050. One of the cosponsors of the 2009 cap-and-trade bill, Rep. Edward Markey (D-Mass.), said the scheme would cost the average family the equivalent of “about a postage stamp a day,” far less than critics claimed.

John Reilly, codirector of a MIT research group studying climate economics, says the UK predictions are in the “sensible range” for the United Kingdom but a little rosy when applied around the world. “It may be a bit optimistic on the low end,” he says, “because we’ve not seen a lot of evidence that countries have been able to adopt clean, broad cap-and-trade-incentives without gunking them up with policies that add to the cost.”

What complicates things further is that the cost of not acting is “hugely difficult to estimate and quite controversial,” he says. It’s hard to get a handle on how, and when, costs from severe weather or ecological loss will mount. “We’re seeing things we never even thought of 20 years ago. So we continue to be surprised. And those surprises aren’t good.”

Put another way: “We’ve jumped off the cliff, but we haven’t landed yet. And it’s hard to stop ourselves in mid-air.”

Regardless of the complexity of working out the costs of inaction, the vast majority of economists agree that the environmental effects of greenhouse gas emissions create significant risks to the US economy. A 2009 survey of 289 of the world’s top economists with expertise on climate change found broad consensus that the benefits of action outweighed the cost.

Kennedy warns that the United States is lagging behind and risks “storing up costs” for the future. “There is action in various states of the US. But at the national level, clearly the US has not got anything like the ambition we have, and I think in the long term that will be to the economic detriment of the US.”

Listen to part of James West’s interview with David Kennedy below: