As the snow began to fall earlier this week in the lead up to the season’s first major blizzard, New York Governor Andrew Cuomo told reporters that the Northeast was witnessing “a pattern of extreme weather that we’ve never seen before.” Climate change, Cuomo argues, is fueling bigger, badder weather events like this one—and like Hurricane Sandy.

While the science that links specific snowstorms to global warming is profoundly difficult to calculate, the Intergovernmental Panel on Climate Change says it’s “very likely”—defined as greater than 90 percent probability—that “extreme precipitation events will become more intense and frequent” in North America as the world warms. In New York City, actual snow days have decreased, but bigger blizzards have become more common, dumping more snow each time. Mashable reported that all of New York City’s top 10 snowfalls have occurred in the past 15 years. Scientists can trace the cause to the enormous amount of energy we’re pumping into the oceans. Kevin Trenberth, a senior scientist at the National Center for Atmospheric Research, told Wired this week that “the oceans are warmer, and the air above them is more moist”—giving storms more energy to unleash more precipitation. In short, the blizzard dubbed Juno was being fueled in part by the ocean’s excess of climate change-related heat.

But climate change may not be the only way that human activity is making storms worse. In an emerging body of work, NASA scientists have identified a surprising contributor to American storms and cold snaps: Asia’s air pollution. Over the past few years, a team at NASA’s Jet Propulsion Laboratory and the California Institute of Technology has found that aerosols—or airborne particles—emitted from the cities fueling Asia’s booming economies are making storm activity stronger in the Northwest Pacific Ocean. These storms wreak havoc on the polar jet stream, a major driver of North America’s weather. The result: US winters with heavier snowfall and more intense cold periods.

Pollution billowing from Asia’s big cities, they found, is essentially “seeding” the clouds with sulfur, carbon grit, and metals. This leads to thicker, taller, and more energetic clouds, with heavier precipitation. These so-called “extratropical” cyclones in the Northwest Pacific have become about 10 percent stronger over the last 30 years, the scientists say.

Chinese cities, for example, are so toxic that 90 percent of them fail to meet the country’s own pollution standards. But it’s not just China. In terms of air quality, 13 of the 20 most polluted cities in the world are in India. And thirty-one of the world’s 50 most polluted cities are found in China and Southeast Asia (including India), according to the World Health Organization. 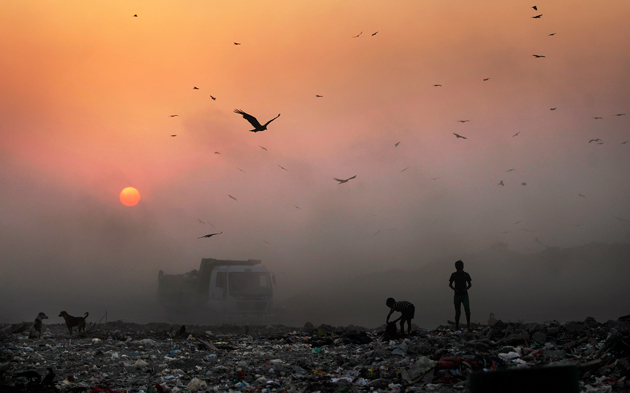 New Delhi, India, has the worst air pollution in the world, according to the WHO. All that smog is altering weather patterns around the world. Altaf Qadri, File/AP

The NASA animation above shows how these aerosol emissions moved around the world, from September 1, 2006, to April 10, 2007. I’ve included two versions of it. The first shows the Earth as a globe, the second shows the planet laid out flat. Also seen in the video are locations of wildfires, indicated by red and yellow dots. At the start, fires burn over South America and Africa, emitting black carbon, while dust from the Sahara moves westwards, getting sucked into two Atlantic cyclones. Later, in February, fires burning in Thailand and Southeast Asia mix with sulfates from industry in China and are eventually pulled eastward into cyclones that cross the Pacific and reach North America.

The work raises questions about proposals to “geoengineer” the globe by pumping aerosols into the atmosphere, which some argue could reduce the Earth’s temperature by partially blocking out the sun. The NASA researchers found that sulfates are the most effective type of aerosol for deepening extratropical cyclones, which means that using them to fight global warming could bring about more stormy winter weather around the world.

There’s some hope that China is attempting to stabilize and, eventually, curb its pollution through new emissions standards that would cut the level of dangerous particles, including sulfates. There are also signs that China’s coal boom—the source of most of the country’s air pollution—is finally slowing down. A new analysis released this week by Greenpeace showed that for the first time this century, China’s coal consumption fell in 2014.

But India is another story. That country, which has the fifth-largest reserves of coal on Earth, is desperate to provide power to its millions of impoverished citizens. Sixty percent of the India’s power currently comes from coal, and despite Prime Minister Narendra Modi’s promises to ramp up solar energy, he is also planning to double India’s coal production to more than 1 billion tons annually.

So stock up on non-perishable grocery items. Looks like those blizzards are only going to increase in size.