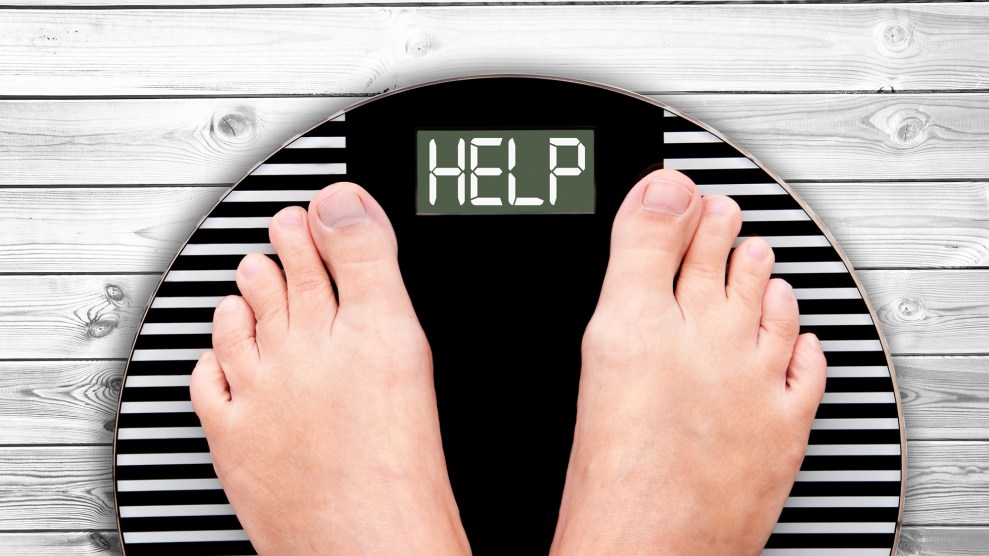 It’s January, the month of new diets and gym memberships. In the spirit of starting off a brand new year, there’s no reason not to eat healthier and move around more. But if your aim is just to lose pounds, you might be on the wrong track. In her new book, The Secret Life of Fat, biochemist Sylvia Tara reveals what many dieters have suspected for a long time: There’s more to losing weight than just eating less and exercise. Tara joined us on the most recent episode of Mother Jones’ food politics podcast Bite.

The long list of factors that influence body size and shape, writes Tara, includes our genes, hormones, and bacteria in our gut. And what’s more, she notes, weight is not a great indicator of overall health (a topic I’ve written about before).

When marmoset monkeys were infected with the virus, their body fat increased by almost 60 percent.

But here’s what hardly anyone talks about: Viruses, too, can lead to weight gain. In her book, Tara tells the story of a 62-year-old man named Randy who had struggled with his weight for his entire life. After being scratched by a chicken on his family’s farm at age 11, Randy’s appetite increased dramatically—and despite his intense physical work on the farm every day, he swiftly packed on the pounds. No one could explain Randy’s weight gain, and the fact that the rest of his family members were slim made it even more puzzling.

It wasn’t until decades later that Randy found a possible explanation. He went to see a pioneering endocrinologist named Dr. Richard Atkinson, who suspected that Randy had contracted a virus that was partially responsible for his extra weight—and his difficulty shedding pounds. Atkinson’s postdoctoral assistant, an Indian scientist named Nikhil Dhurandhar who had studied metabolism-changing chicken viruses, confirmed Atkinson’s suspicion with a blood test: Randy tested positive for a virus called Ad-36.

Tara chronicles a fascinating series of experiments in which Atkinson and Dhurandhar showed that Ad-36 changed animals’ metabolisms. When marmoset monkeys were infected with the virus, for example, their body fat increased by almost 60 percent. The team then set about studying Ad-36 in humans. Here’s how Tara describes what they found:

Dhurandhar and Atkinson tested over 500 human subjects to see if they had antibodies to the Ad-36 virus, indicating they had been infected with it at some point in their lives. His team found that 30 percent of subjects who were obese tested positive for Ad-36, but only 11 percent of nonobese individuals did—a 3-to-1 ratio. In addition, nonobese individuals who tested positive for Ad-36 were significantly heavier than those who had never been exposed to the virus. Once again, the virus was correlated with fat.

The team went on to study pairs of twins in which one tested positive for Ad-36 and the other tested negative. “It turned out exactly the way we hypothesized,” Dhurandhar told Tara. “The Ad-36 positive co-twins were significantly fatter compared to their Ad-36 negative counterparts.”

Whether Randy was infected with Ad-36 from the chicken that had scratched him as a child—and how large of a role Ad-36 played in his own struggles—is almost impossible to know. There’s no cure for Ad-36, though Atkinson is hopeful that scientists will someday develop a vaccine. He believes that as many as 30 percent of obese people may be infected with the virus.

Meanwhile, Tara reports, Randy still struggles to lose weight. He eats just 1,500 calories a day; his main meal is typically a salad. Atkinson told Tara that Randy “is a remarkable person, with more discipline than anyone I have ever met.”