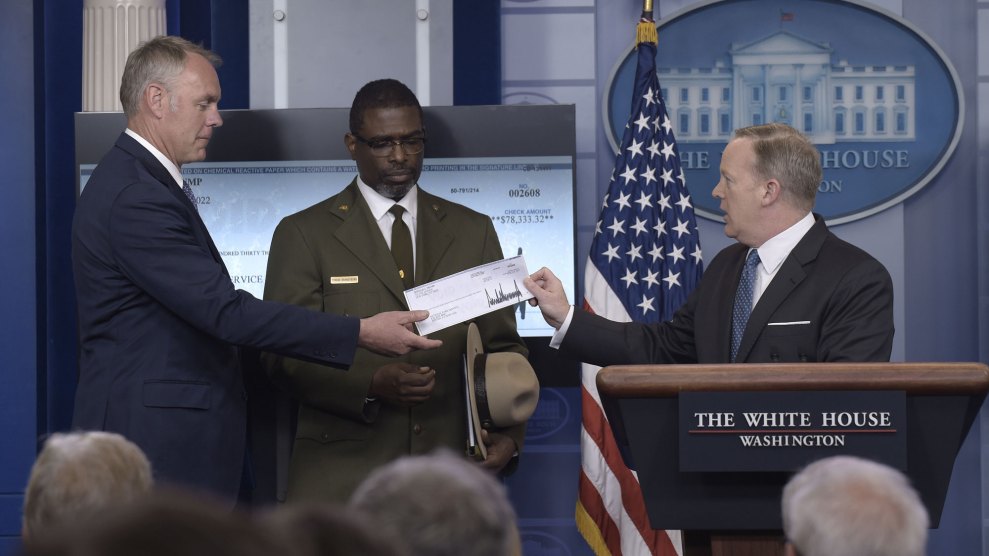 Donald Trump is donating the first three months of his presidential salary to the National Park Service, White House Press Secretary Sean Spicer announced on Monday. “The Park Service has cared for our parks since 1916,” Spicer said in handing over a check for $78,333 to Secretary of the Interior Ryan Zinke, “and the president is personally proud to contribute the first quarter of his salary to the important mission of the Park Service, which is preserving our country’s national security.”

It was unclear if Spicer misspoke by mentioning national security, and Zinke emphasized the donation would help cover $229 million of deferred maintenance on the nation’s 25 national battlefields. “As a veteran myself, I want to say I am thrilled at the President’s decision to donate the check he did today,” he said. “We’re excited about that opportunity.”

Last month, Trump proposed slashing spending at the Department of Interior by $1.5 billion, 12 percent of the budget at the Park Service’s parent agency. Advocates have warned that the cuts would harm acquisition and preservation programs. The check presented today would make up just .005 percent of the cuts.