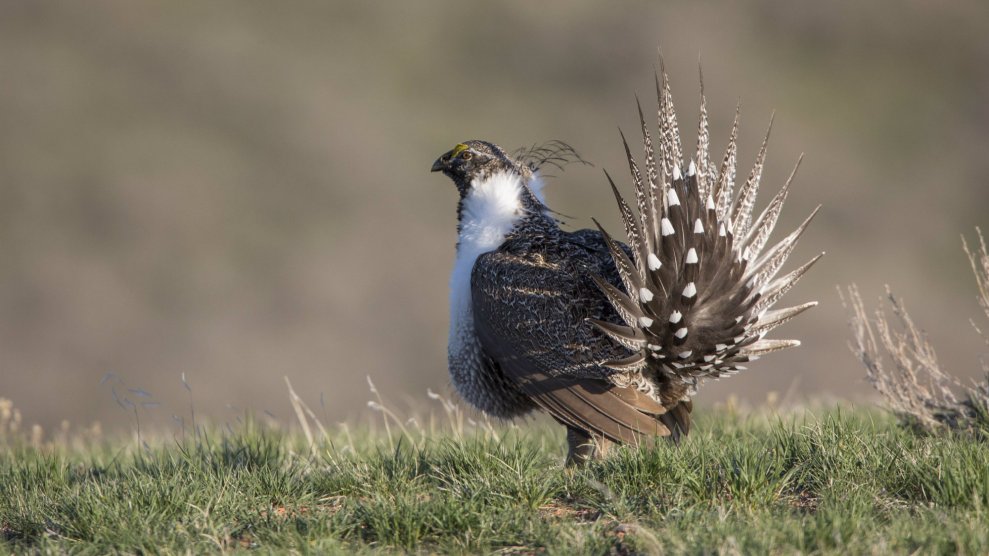 “Nothing is more priceless and more worthy of preservation than the rich array of animal life with which our country has been blessed.” With those words, President Richard Nixon signed the Endangered Species Act into law in 1973. In doing so, he ushered in an era of federal environmental regulation that has saved animals on the verge of extinction, like the bald eagle, gray wolf, and humpback whale, and preserved crucial habitats for animals not on the list, like the sage grouse.

Few people disputed the importance of such an act at the time—it cleared the House in a 355-4 vote and sailed through the Senate unanimously. Since its passage, the Endangered Species Act has also enjoyed bipartisan approval from the electorate. A recent study by an Ohio State University researcher using 2014 poll data found that more than 80 percent of Americans, including 74 percent of conservatives, support the law. But there is a crucial sector that has been battling it for decades.

In a series of announcements last week, Trump administration officials and their Republican allies in Congress announced actions intended to weaken key portions of the Endangered Species Act. If implemented, these regulatory changes in agencies as disparate as the National Oceanic and Atmospheric Administration and the Fish and Wildlife Service could wholly transform the intention of the act by allowing economic considerations to supersede environmental concerns when classifying animals as “endangered or “threatened.” The changes would also shift the balance of authority from federal regulators to the states and strip protections from several animals whose habitats pose a nuisance for developers and oil firms. Stakeholders who benefit from these rollbacks do not reflect the majority of voters, or even the Republican Party, but their viewpoint, closely aligned with the GOP and Trump, has become ascendant in recent years.

“There’s been a pretty long-term campaign against the Endangered Species Act, really for 20 to 25 years,” said Andrew Rosenberg, director of the Center for Science and Democracy at the Union of Concerned Scientists. Now, with Republicans in control of both chambers of Congress, the administration’s outspoken promise to protect the fossil fuel industry, and a president who has promised to revoke two regulations for every additional one he implements, the time is ripe for the campaign against the act to succeed.

Who’s to gain? Here are the different interest groups and stakeholders who would benefit from weakening the Endangered Species Act:

Readers of the National Defense Authorization Act, a “must pass” bill that annually funds the Defense Department, might have wondered why the American burying beetle and the sage grouse, a bird that looks like a cross between a peacock and a fat chicken, were mentioned in the Pentagon’s fiscal blueprint. Or, for the matter, why the Endangered Species Act appeared at all in the military’s budget. Even the Pentagon was confused. A brief statement released last week from a department spokesperson said the provisions were “not necessary to protect military testing” and should be excluded.

As strange as the focus on these animals may seem, it is anything but arbitrary.

Oil and gas companies have spent years lobbying the government to weaken protections for the sage grouse, whose ranks have been decimated over the last century. Because its habitat expands across “173 million acres of arid sagebrush steppe in the American West, and it has never been listed as endangered,” as National Geographic reported this week, the bird has long been a point of contention for drillers and petroleum firms.

The Obama administration cut a deal with drillers in 2015 to keep the bird off the endangered species list as long as drillers stayed away from its main habitat. But in September, the Trump administration declared its intention to rip up this deal to pave the way for “new mineral leasing, grazing and other commercial activities,” according to the New York Times.

The burying beetle, distinguished by its orange antennae, has attracted much of the same ire from industry groups eager to avoid costly workarounds to develop on its habitat. A collection of lobbying groups, including the Independent Petroleum Association of America and American Stewards of Liberty, sued the federal government in September in an attempt to remove the beetle from the endangered species list. Mostly prevalent in Oklahoma, the insects have thwarted the efforts of developers planning to build pipelines across the northern and eastern parts of the state. Unlike other animals who live in specific habitats, burying beetles are more free-roaming. In some cases, companies have hired biologists to trap the bugs and move them away from proposed construction sites using Styrofoam cups and “rotten chicken,” the Oklahoman reported.

Companies may have to wait a little longer before they can stop worrying completely about deferring to the sage grouse and burying beetle. On Monday, lawmakers removed the provisions mentioning those animals from the defense funding bill, but a strong network of support remains for energy companies within Congress and among Trump administration officials. Interior Secretary Ryan Zinke, who once described the administration as “pro-energy across the board,” triggered an internal investigation after Politico revealed that he used his foundation to help the chairman of Halliburton, one of the country’s largest oil service companies, with a real estate deal.

The Endangered Species Act has not only irritated industry titans. Because of the strictures it places around endangered habitats, farmers and other property owners who cannot use the full extent of their land have also complained.

“ESA restrictions are especially harsh for farmers and ranchers because they prevent them from making productive use of their primary business asset,” reads a current fact sheet from the American Farm Bureau Federation. “Unlike in most other industries, farm and ranch families also live on the land that they work. Restrictions imposed by endangered species concerns adversely impact farm and ranch quality of life.”

Agricultural trade groups have long advocated local oversight, hoping that state conservation officials would be more sympathetic allies than their federal counterparts. Sen. John Barrasso (R-Wyo.), chairman of the Senate Environment and Public Works Committee, laid out a plan last week to amend the ESA by restoring more power to the states in a move critics claim will obstruct federal oversight.

Barrasso has defended the proposed reforms as necessary for a law that has not been significantly amended since 1988 and relies to a large degree on an overworked base of career officials. “Over the 45-year life of the Endangered Species Act, the capacity of state wildlife agencies has grown significantly,” he said at a Senate hearing to discuss the draft bill. “States now spend over $5.6 billion on conservation and employ approximately 240,000 people and volunteers.” The bill has received endorsements from the Western Governors’ Association and 130 other agricultural trade groups and energy lobbying organizations, including the Farm Bureau.

In a letter to Barrasso, Zippy Duvall, president of the Farm Bureau, wrote that his organization “believes that any environmental decision-making process benefits from having information from affected state and local governments. These entities very often have better and more updated information on species’ locations and local economic impacts than the federal agencies.” One provision that particularly disturbed environmental advocates allows state officials to submit comments on the performance of federal employees. “It’s basically an intimidation tactic,” says Rosenberg, who formerly worked at the National Oceanic and Atmospheric Administration.

And, of course, Republican lawmakers

Reforming the ESA would not just satisfy these trade groups; it would also be a feather in the cap of lawmakers up for reelection, like Barrasso and House Natural Resources Committee Chairman Rob Bishop (R-Utah), whose efforts have become more urgent as the legislative calendar inches closer to the midterm elections. Bishop has said he would like to repeal and replace the ESA, and most of the bills introduced last week to target different provisions of the law originated from his committee.

“There’s a core group of conservatives that’s trying to push through as many things as they can,” Rosenberg said. “Effectively, the president will sign on to anything that’s favoring business and economic development over any other consideration.”