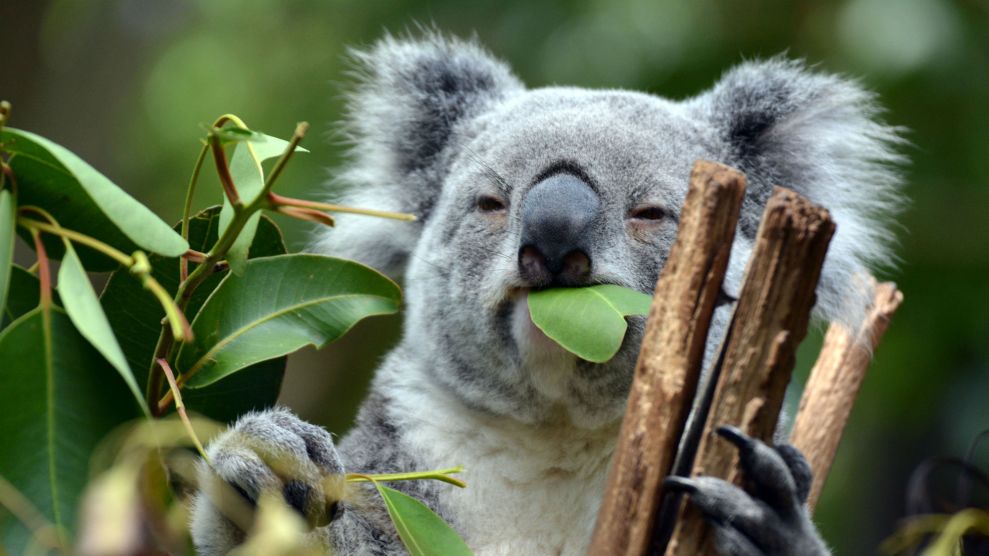 A few years ago, koalas were literally dropping dead off tree branches in Cape Otway, Australia.

“The trees just started dying and there was a big crash in koala numbers—I was burying them everywhere because they were stinking, it smelled so bad,” Frank Fotinas, who manages a campground in Cape Otway, told the Guardian in 2015. “There were dozens and dozens of them, just lying at the bottom of trees.”

The koala numbers there boomed—from 75 individuals in 1981 to nearly 8,000 in 2013—and the increased population actually depleted the koalas’ favorite food source.

It was a rough time for the species in the region—a koala hotspot. The furry, cute marsupials were dying because, free of fur-trade hunters, the koala numbers there boomed—from 75 individuals in 1981 to nearly 8,000 in 2013—and the increased population actually depleted the koalas’ favorite food source. The manna gum trees, a species of eucalyptus, were stripped clean of leaves. More than 70 percent of the koalas would starve to death or be euthanized by wildlife officials who had deemed them too weak to survive.

The odd thing was, it didn’t seem like they had to starve. There was another food source available to the koalas on Cape Otway: a species of Eucalyptus tree called messmate. In fact, other koalas there actually prefer messmate to manna gum and spend their entire lives eating it. But the manna-gum-preferring koalas, rather than adapt to a new food source, just died.

There was no real understanding of why—and no way to help the koalas adapt.

But a study published Tuesday in the journal Animal Microbiome may have found a way to help these koalas change their diets and survive. Australian researchers reveal they’ve performed the first-ever fecal transplants on a small group of koalas, which resulted in the individuals finally eating their non-preferred food source—suggesting the refusal to eat certain leaves is not random, but the result of gut bacteria. The research is a crucial development that may help the entire species adapt their diets to new food sources as they are threatened by habitat loss, climate change, and other forces.

The manna-gum-preferring koalas, rather than adapt to a new food source, just died.

Blyton, who was motivated to conduct the study after the deaths on Cape Otway, says she knew of prior research in the United States that showed how gut bacteria may help packrats consume a poisonous shrub. She wondered if something similar was happening with the koalas—that perhaps some of the koalas actually preferred messmate because of the bacteria in their bellies.

To test her hypothesis, Blyton and her colleagues developed a fecal transplant, first collecting poop from the koalas that ate a diet consisting of messmate. As the koalas defecated, their “fecal pellets” fell onto collection cloths under the trees. Researchers then extracted the bacteria from the poop, packaged it in capsules, and fed them to a total of 12 koalas, which primarily ate the other tree species, manna gum. The koalas were temporarily held in captivity on Cape Otway for observation.

Over 27 days, the researchers monitored what the koalas in captivity ate. The koalas did in fact eat more messmate, and tests showed their gut bacteria shifted to look more like the microbiome of the wild messmate-eating koalas. How much messmate they ate depended on how much their microbiomes changed, with the most responsive koala increasing his intake from 18.7 percent to 46.6 percent messmate over the course of study.

She wondered if something similar was happening with the koalas—that perhaps some of the koalas actually preferred messmate because of the bacteria in their bellies.

The findings are significant for koalas, which are listed as “vulnerable” in Australia. In the southern state of Victoria in particular, koalas can get caught in high-breeding populations that end up “defoliating” the trees, or entirely stripping their leaves, as they did in Cape Otway in 2013. The government often steps in in those cases, Blyton says, and relocates the koalas to areas where the resources aren’t depleted. “Sometimes those translocations are successful and they do quite well. In other cases, the animals don’t fare so well when you move them,” she says. “And we think that these capsules may be a way to help those koalas that don’t do so well adapt to the new diet in the new population.”

The transplant could also treat koalas that have been given antibiotics, which wipe out their microbiomes and leave them in some cases unable to digest their food. (This is a more common occurrence than you may imagine: Koalas in the northern part of Australia, for example, may need antibiotics to combat chlamydia and koala retrovirus, which causes an AIDS-like disease that has devastated populations in Queensland.) “Again,” says Blyton, “if we could potentially give them these capsules to maintain the microbiome through this antibiotic treatment, we may get higher success rates in rehabilitation.”

Of course, the study was small, with 12 koalas, and was limited to just one animal species. Still, researchers are hopeful there could be implications for other species too—especially ones that, like koalas, have specific diets. As research on the human microbiome gains traction, Blyton says, “it’s made conservation scientists wonder, ‘Well if [the microbiome] is so important to humans, what does it mean for the animals that also have this complex microbiome? Is it affecting their ecology? Is it affecting their habitat selection?’ And our study is one of the first to actually provide evidence to say that yes—it is.”