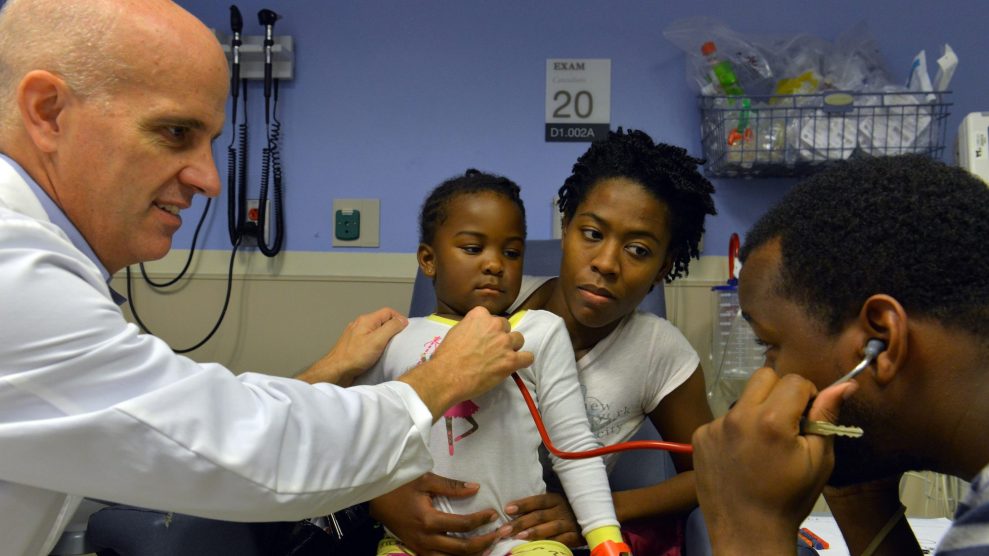 On Monday, some of the authors of the annual Lancet Countdown on Health and Climate Change, a massive report compiled by 120 health and climate experts from around the world on the relationship between climate change and global health, gathered in the Russell Senate office building. They called on policy makers and Congress to act on the report’s findings, which concludes that healthcare providers are in a unique position to fight climate change and should be empowered to do so.

“I hope you can be ambassadors, to help spread the word,” Rep. Eddie Bernice Johnson (D-Texas), who heads the House Committee on Science, Space and Technology, told those who were gathered. “This is probably the most serious crisis that we’re going to be facing in the years to come.”

The report, which was released last week by the British medical journal, lays out two futures: One in which the world has addressed the climate crisis and managed to curtail the worst consequences of carbon emissions. Another without any intervention, in which the temperature will have risen more than two degrees Celsius, and a global health crisis will ensue. The integration of climate issues with the world of healthcare, the study’s authors note, is essential to addressing and perhaps rolling back the worst effects of climate change.

The authors link 41 “indicator points,” or pieces of data that connect climate change phenomena—such as the prevalence of wildfires in a given region, or a country’s carbon emissions—to their implications for public health, in an effort to take a snapshot of the state of the world and the parameters of the crisis today. In 2018, 220 million more elderly people worldwide were exposed to heatwaves than in 2000. In the US, air pollution caused 64,00 deaths in 2016, and extreme heat cost 64.7 million lost labor hours in 2018.

Dr. Renee Salas, a medical instructor at Harvard Medical School and one of the authors of the US section of the policy brief, described the objective of the project during a call with reporters. “I hope, and I believe passionately, that it will lead to a more engaged community where we come together around an issue and succeed,” she said.

“This focus on children is valuable because of the health and vulnerability of children to climate change.”

In an effort to make often mind-boggling climate and health statistics more meaningful, the Countdown describes the two possible realities a child born in 2019 could face. One in which the child grows up when there is no meaningful intervention, and temperatures rise by three degrees Celcius by 2050. In the other scenario, there is a massive global effort to cut back on carbon emissions. In such a scenario, that child “would see the phase-out of all coal in the UK and Canada by their sixth and 11th birthday.” If nothing is done, it is likely that the child will see an alarming worldwide spread of  life-threatening malaria and dengue fever, further deterioration of air quality, and more frequent trips to the hospital due to environmental conditions like extreme heat. The report offers a series of steps to take that could insure “that the health of a child born today is not defined by a changing climate.”

Barbara Gottlieb, the director of Environment & Health at Physicians for Social Responsibility (PSR), a physicians’ group that advocates for environmental action to preserve public health, was impressed by the decision to reframe the outlook to focus on children’s health. Tying a human element into what might otherwise be confusing and overwhelming statistics could widen the readership beyond the field of healthcare professionals. “This focus on children is valuable both because of the health and vulnerability of children to climate change,” she said. “And also because it’s a way of reaching a much broader audience: health professionals and non-health professionals who are very much invested in the health and future of our kids.”

Health and climate experts from global institutions that include Yale University, the Iran University of Medical Sciences, and the World Bank who contributed to the report suggest that one way to achieve the optimal scenario is to start small. “Every single effort, including climate change in the United States that has led to air being cleaner, water being cleaner, land being more healthy to live in, all of that started at the local level and worked its way up,” said Gina McCarthy, Director of the Center for Climate, Health and the Global Environment at Harvard University and former Environmental Protection Agency head. She was not involved in writing the report.

Certainly, large-scale efforts to confront climate change with ambitious policies like implementing alternative energy use across Canada can have valuable consequences. But even if some of the recommendations in the Countdown may appear modest, lowering the “threshold for heat alerts” across cities in the Northeast, for instance, they still have the potential to save lives.

Local efforts become even more important when a national government, like the Trump administration, is determined to ignore the seriousness of climate change and roll back federal policies designed to address it. Paradoxically, without being able to rely on support from the federal or state government, localities will be forced combat climate change on their own, which may lead to more engaged communities. “People can be lulled into complacency when [their] leaders are moving in a direction that you agree with,” Salas said. “Even if they’re not moving fast enough, it doesn’t quite engage the grassroots efforts as much.”

“People can be lulled into complacency when [their] leaders are moving in a direction that you agree with. Even if they’re not moving fast enough, it doesn’t quite engage the grassroots efforts as much.”

The report envisions healthcare professionals becoming much more engaged with those grassroots movements. The public may be skeptical of politicians and advocates, but it tends to trust primary care physicians. That becomes an opportunity to bring climate advocacy to the public.

“Physicians are very important as credible individuals to communicate the challenges from climate change,” said former US surgeon general Dr. Richard Carmona on a call with reporters before the release of the report. He also included pharmacists, paramedics, and EMTs on the list.

For Salas, adding climate change and its potential health effects to the list of topics regularly discussed between healthcare professionals and their patients couldn’t come soon enough, since its impact can appear in unexpected ways. For example, Puerto Rico is a major manufacturer of IV fluids and after Hurricane Maria, production all but stopped for five months. The result was austerity rarely seen in Boston hospitals, with some of the world’s most cutting edge medical facilities. Salas recalls the frustration of emergency room visitors in need of IV fluids for hydration, only being able to receive gatorade. “There are widespread impacts from climate change that I think we are just beginning to understand,” she says. “We need to figure out how to make our healthcare systems resilient.”

Along with her colleagues, Salas hopes the Lancet report can be the roadmap that expands that dialogue, finding its way into the offices of lawmakers and and physician alike. During today’s appeal, Dr. Jeremy Hess, another report author, added some hope to the task at hand. “We won’t doctor our way out this,” he said. “But we will doctor our way through it.”