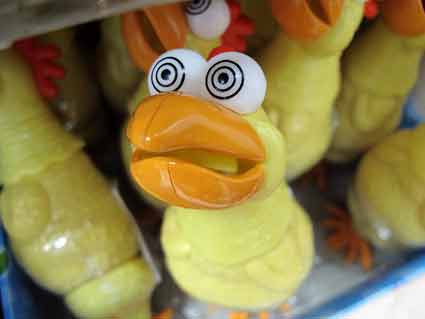 The problem of routine antibiotic use on factory farms has generated a lot of ink lately—especially after this startling recent report on a possible link between industrial chicken farming and a spate of antibiotic-resistant urinary-tract infections among women.

But what about vaccine use? Concentrated animal feedlot operation (CAFO) operators use antibiotics to help prevent bacterial infections from raging through spaces densely packed with animals (as well as to make the animals grow faster). To address the problem of viral infections, against which antibiotics are ineffective, they turn to vaccines, which get considerably less press.

Which is why this ScienceNow report from Australia caught my eye:

Vaccines aren’t supposed to cause disease. But that appears to be what’s happening on Australian farms. Scientists have found that two virus strains used to vaccinate chickens there may have recombined to form a virus that is sickening and killing the animals.

That item got me thinking about the swine flu outbreak of 2009, when a virus jumped from pigs to humans (possibly after originating in humans) and then caused a global pandemic. (Thankfully, the strain wasn’t very virulent—most people we able to shake it off.) When I was writing about swine flu back in 2009, I came upon this news story that ran in Science back in 2003 called “Chasing the Fickle Swine Flu” (PDF). The article shows that swine flu on US farms didn’t mutate much from around 1930 until 1998, when a novel form of swine flu broke out on a North Carolina hog CAFO—and, after that, swine flu began to evolve rapidly. The era of swine flu stability had ended. It’s impossible to say what role flu vaccines on farms played in the evolution of the virus, but scientists had been warning for years that factory-farm vaccines could create novel strains be dangerous to humans.

The Science article cites two possible catalysts for the switch to rapid evolution in 2008. The first is the the consolidation of hog farming that took place in the 1990s—”the percentage of farms with 5,000 or more animals surged from 18 percent in 1993 to 53 percent,” the article reports. University of Minnesota veterinary pathologist Kurt Rossow told Science, “With a group of 5,000 animals, if a novel virus shows up, it will have more opportunity to replicate and potentially spread than in a group of 100 pigs on a small farm.”

The second is the rise of flu vaccinations on factory farms:

In 1995, swine flu vaccination was so new that the National Swine Survey conducted by the United States Department of Agriculture didn’t bother to assess its extent…Today [i.e., back in 2003], more than half of all sows are vaccinated against both H1N1 and H3N2 viruses, says Robyn Fleck, a veterinarian at Schering-Plough, one of the nation’s three producers of swine influenza vaccine.

All those vaccines created concerns of a treadmill effect—theoretically, when all the pigs in a building are vaccinated, only vaccine-resistant flu mutations can survive, creating a constant need for new vaccines. Already in 2003, Science reported, researchers were finding flu in vaccinated pigs. “Flu is also showing up in piglets thought to be protected by maternal antibodies passed on from vaccinated sows,” the article states. Here’s a choice bit:

Widespread vaccination may actually be selecting for new viral types. If vaccination develops populations with uniform immunity to certain virus genotypes, say H1N1 and H3N2, then other viral mutants would be favored. [Molecular virologist Richard] Webby suggests that the combination of avian polymerase genes generating errors in the genetic sequence and immunologic pressure from vaccination may be selecting for unique variants.

Now, that same virologist, Richard Webby, goes on argue that mass vaccination is important, drawbacks aside. The “benefits of vaccination outweigh this side effect,” Webby told Science, because “If you can decrease the amount of virus, you can reduce the chances of interspecies transmission.”

Webby, who directs the World Health Organization’s Collaborating Center for Studies on the Ecology of Influenza in Animals and Birds, reiterated in a phone interview that “theoretically,” vaccines “introduce immunity” into animal populations can “drive change” in targeted viruses. He added that it’s hard to find “good, solid evidence” of that effect—that is, to prove that vaccinations are the catalyst for an evolving viral strain circulating in animal populations. However, he did point me to this 2004 paper by USDA scientists looking at vaccinations targeting avian flu on chicken farms in Mexico, which found “results suggest[ing] that Mexican lineage viruses are undergoing increased genetic drift that is most likely due to vaccination pressure,” although other causes could not be ruled out.

If vaccinations are indeed driving new mutilations, then I see a gaping dilemma presented by industrial-scale hog farming: If we insist on raising animals in massive concentrations, we’re forced to choose between a vaccination treadmill, which reduces the incidence level of flu in CAFOs but predictably generates novel, vaccine-resistant strains, or not vaccinating at all, which would allow flu to run rampant among millions of hogs. There is, of course, a third option: Stop raising animals under industrial-scale, dense conditions.

As for those chickens in Australia, the particular virus strain that scientists found does not affect humans. But the possibility for some future strain to do so exists. Researchers told Science that the problem of new virus strains emerging from vaccines is “a problem that needs to be taken seriously” but also stressed that “should not be allowed to detract from the enormous health benefit generally provided by vaccines.” Again, the paradox of Big Ag vaccines: They allow factory farmers to manage pathogens, but they also potentially lead to new strains that spin out of control.

It’s also important to note that the vaccines in use on those Australian poultry farms are what’s known as “live, attenuated” vaccines, which according the National Institutes of Health, contain a “version of the living microbe that has been weakened,” while flu vaccines on hog farms are “inactivated,” a milder form of vaccine in which the disease-causing microbe has been killed. Webby told me that while live vaccines could in theory recombine to form new virus forms, there’s “zero chance” that inactivated ones could.

I should stress that these reflections on vaccination practices on factory farms have little bearing on the question of human vaccinations. A vaccinated child who spends most of her day with her family in a house or apartment lives under completely different conditions than, say, a hog living 24/7 in tight conditions among 5,000 genetically very similar peers in filthy conditions. The problem of vaccinations on factory-scale farms is a complex one, and hasn’t been reported on much. What vaccines are being used on US factory farms besides the swine flu ones? Are “live, attenuated” vaccines, like the ones used in Australia, being used in US chicken CAFOs? I plan to dig into it.