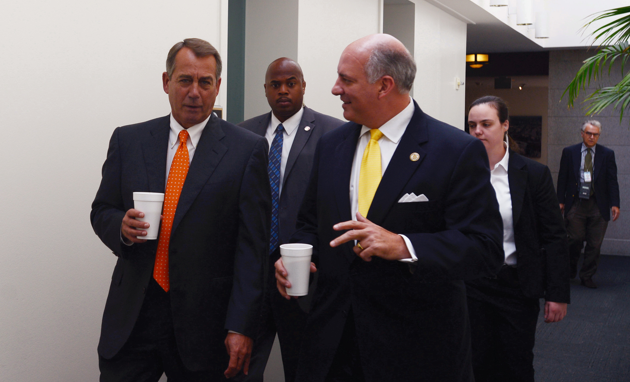 Shutting down the government and threatening a default in an attempt to block poor people from getting health insurance isn’t the only thing House Republicans did over the past two weeks. They also continued their push to defund food stamps.

It went unnoticed amidst the debt ceiling fight, but last weekend, Democratic and Republican leaders in the House selected the lawmakers that will negotiate with the Senate to hammer out a final version of the farm bill, the massive bill that funds agriculture and nutrition programs. The main stumbling block for months has been how much money the bill should devote to food stamps; the House wants to strip $39 billion from the program, and the Senate wants to cut just $4 billion. The fact that Republicans in the House named one of the most anti-food stamp members of Congress to the committee that will decide the future of food stamps does not bode well for the program.

Rep. Steve Southerland (R-Florida) has been leading the GOP effort to slash the food stamp program, called the Supplemental Nutrition Assistance Program, or SNAP. “For the past six months, Southerland… [has] delivered 45 speeches about food stamps… and presented his idea to 13 governors,” Eli Saslow wrote in a profile of the congressman in the Washington Post last month. Southerland, who fought for the $39 billion worth of cuts and another provision that imposes new work requirements on food assistance recipients, told state human service secretaries last year that food-stamp reform is “what I’m about.”

Passage of a final bill is already a year overdue. In June, the House failed to pass its measure because both Republicans and Democrats opposed it: Democrats thought the food stamp cuts were “heartless,” while conservative Republicans thought they didn’t go far enough. In September, the House split food stamps from the rest of the agriculture bill and passed the harsh cuts separately, with zero Democratic votes. The House plan would cut 3.8 million people off the program next year.