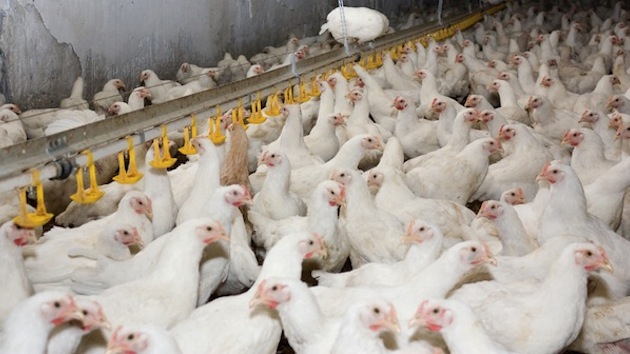 In a wide-ranging interview with the India-based Economic Times, Cargill CEO David MacLennan talks about how the globe-spanning agribusiness giant managed to turn the 2008 economic crisis into a “record year of profits”—a remarkable performance, given that that year’s food-price spikes pushed 115 million people into hunger, as the UN’s Food and Agriculture Organization estimated. And then MacLennan drops this nugget on his company’s poultry operations in China:

So we are building a facility in Shuzou, Nanjing, which will have 45 farms and it’s a chicken facility that will process 1.2 million chicken every week. That’s 60 million chicken a year. We have a hatchery, where we hatch the eggs and one-day old chicks, DOCs, get transported to the farms. The employees live on the farm. They can’t leave because then you increase the risk of disease. So you grow the chicken for 44 days. The chicken goes to the plants, get processed, might be for KFC and McDonald’s, might be for retail. They can count on us because they know where every one of their chicken came from. It came from us because we’re fully integrated as opposed to other companies. [Emphasis added.]

I should note that US meat giant Tyson, too, is rolling out fully integrated and vast chicken facilities in China. But wait, back up: like employees at Foxconn, the company that manufactures Apple products, Cargill’s poultry workers will live on-site. But rather than reside amid the production of iPhones and whatnot—apparently, not the most pleasant place to call home—Cargill’s workers will live amid the growth and slaughter of 1.2 million chickens per week—and all the blood, guts, and vast stores of chickenshit that implies.

MacLennan doesn’t mention whether the live-in requirement the company imposes on its Chinese workers also applies in its poultry operations in other developing countries. But he does boast that the company runs “very big” chicken operations n Nicaragua and Costa Rica, adding that it plans to “develop fully-integrated poultry breeding, hatching, growth and processing” in other countries around the world.

I am reaching out to Cargill to hear more about this innovative chicken factory/worker-housing mashup in China. Kind of gives new meaning to the industry habit of calling its large livestock-raising facilities “confinements.”

We can understand how that might have been confusing. The workers at our chicken plant in China come and go as they please. What our CEO was talking about was a few specialized jobs at the farm where the chickens are raised. In a chicken barn, two or three people go into the barn with the chicks when they’re a day old and stay with them as they grow for 45 days. This is to prevent germs from getting into the barn. The workers have their own quarters, with kitchens and television, etc. When the chicks have grown, the workers leave for about three weeks. -Mark Murphy, Asst. Vice President for Corporate Responsibility, Cargill