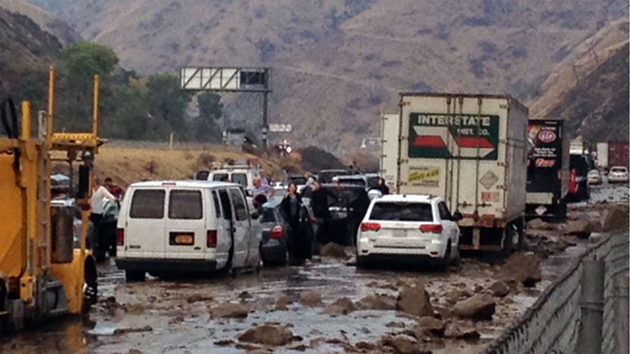 Cars on Interstate 5 in Southern California grind to a halt in the mud after terrential rain hit the area. Caltrans/AP

Mudslides stranded hundreds of motorists on Southern California’s main north-south highway Thursday evening after severe thunderstorms rocked the area. Cleanup crews worked through the night to plow and scoop up the mud, but meteorologists say that thanks to California’s historic drought, widespread wildfires, and a potentially historic El Niño, this disaster could be just a taste of what’s to come this winter.

The rain was part of a slow-moving storm system that passed through the Los Angeles area Thursday afternoon and battered the mountains to the north of the city in Kern County. The result: flash floods that sent mud and debris flowing down hillsides and onto Interstate 5, as well as onto a smaller state highway. I-5 has been cleared and is waiting for final inspection to reopen, but hundreds of cars are still stuck on the state highway.

March of the StreetSweepers to clear mud off of NB #5FWY @KNX1070 @CBSLA pic.twitter.com/nPyLqY2gI6

According to National Weather Service meteorologist Robbie Munroe, it’s too soon to be certain how much we can blame El Niño for the storm—El Niño tends to affect the frequency of storms more than their severity. But if it is the beginning of a wave of El Niño-linked rainstorms, Californians should start bracing for more flooding and mudslides. There are two reasons for this.

Normally, plants and trees are what hold the soil together, says Munroe. But drought and wildfires have decimated plant life in many areas of California. So when heavy rain flows down slopes, it brings mud and debris along with it.

Second, the drought has dried out and hardened the ground. This can be especially dangerous on hillsides and in canyons like the ones surrounding the highways buried by Thursday’s storm. Instead of being absorbed into the soil, rainwater deflects off it and continues careening down the hill, picking up velocity and washing out whatever is in its path.

Munroe says there is one potential upside to yesterday’s storm: Rainfall early in the season could loosen the soil and rejuvenate ground cover, hopefully mitigating the destruction caused by the weather that will arrive later this winter.