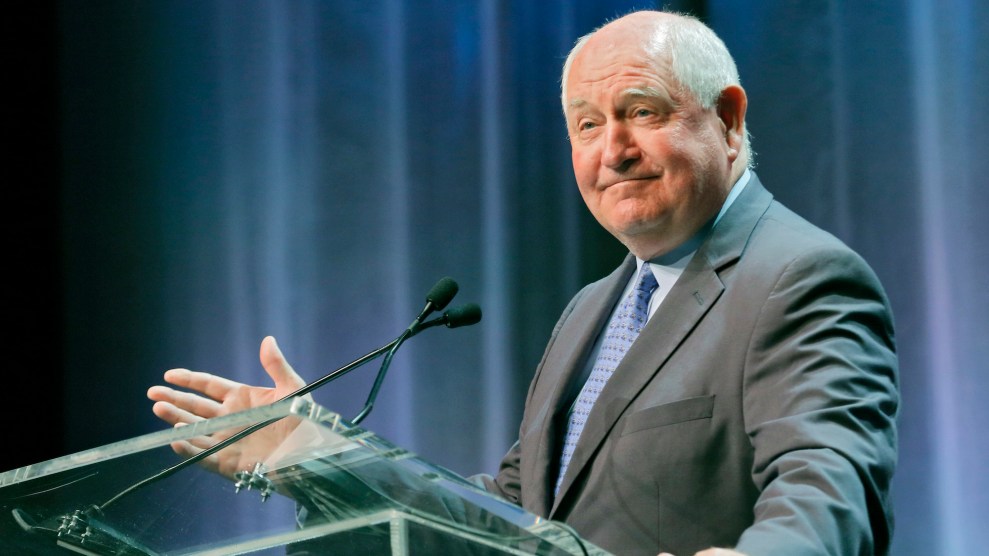 According to a recent US Department of Agriculture report, the Supplemental Nutrition Assistance Program (formerly called food stamps) “increasingly serves the working poor.” Indeed, among working-age SNAP recipients, 57 percent either work or are seeking employment, and 22 percent are disabled.

Even so, USDA chief Sonny Perdue has a message for people who rely on the program: Get a job.

Hear more of Tom’s analysis of the latest Farm Bill news on our most recent episode of Bite podcast; segment starts at 1:00:

That’s the apparent takeaway from a speech and accompanying release Perdue delivered in Pennsylvania on Wednesday. The topic was the farm bill, the twice-a-decade, $500 billion legislation that dictates federal farm and food policy and funds SNAP. Perdue was laying out the Trump administration’s “road map” for the legislation—the principles it hopes will guide Congress as it crafts the bill that ultimately lands on the president’s desk for approval or veto.

Perdue’s policy framework, while generally quite vague, contained some provocative lines about SNAP, which helps keep around 30 million children fed in a typical month. He suggested the next farm bill should “support work as the pathway to self-sufficiency, well-being, and economic mobility for individuals and families receiving supplemental nutrition assistance.”

According to Bloomberg reporter Alan Bjerga, Perdue expanded on that theme in remarks Wednesday:

“It’s evident that there are able-bodied adults without dependents who are on the food stamp program, who we believe it is in their best interests, and their families’ best interests, to move into an independent lifestyle,” Perdue told reporters Wednesday at an event on a farm outside Mifflintown, Pennsylvania. “During the last downturn, it became a lifestyle for some people. We don’t want it to become permanent.”

The administration didn’t specify in the statement how it would change the law or whether it wants to cut funds for the program. Perdue said Wednesday that tightened work requirements that push able-bodied adults into jobs or job-training programs could be one way to save money on a new agriculture law.

Perdue has pounded the theme of able-bodied, childless adults who are allegedly abusing SNAP before, most recently back in December. But the SNAP program already contains work requirements for what it calls Able-Bodied Adults Without Dependents (ABAWDs). According to the USDA website, ABAWDs can only get SNAP benefits for three months of any three-year period, unless they “work at least 80 hours per month, participate in qualifying education and training activities at least 80 hours per month, or comply with a workfare program.”

Stacy Dean, vice president for food assistance policy at the Center on Budget and Policy Priorities, which supports robust anti-hunger policy, was open to a positive read on Perdue’s remarks. “We hope the administration puts forward ideas to help workers earn better wages and find jobs that offer opportunity and upward mobility,” she said. But she added, “Proposals that take away food away from those who are in between jobs or are stuck in a part time job would be a mistake.”

Ferd Hoefner, senior strategic advisor at the National Sustainable Agriculture Coalition and a veteran observer of federal food policy, said Perdue’s get-a-job attitude toward SNAP reflects the heavy lift the administration and the GOP Congress face in passing a farm bill during a time when potentially momentous midterm elections are looming amid deep polarization and legislative chaos from recurring government-shutdown scares.

The dilemma is this: A significant portion of House Republicans—the so-called Freedom Caucus—will only vote for a farm bill that includes massive SNAP cuts. But most House Dems will only vote yes if the bill doesn’t cut SNAP. As a result, he says passage of a farm bill in 2018 “will be difficult if impossible.”

But the leverage in this case is with the SNAP-supporting Democrats—because if no farm bill passes in 2018, the program’s funding will automatically renew at current levels, Hoefner says.