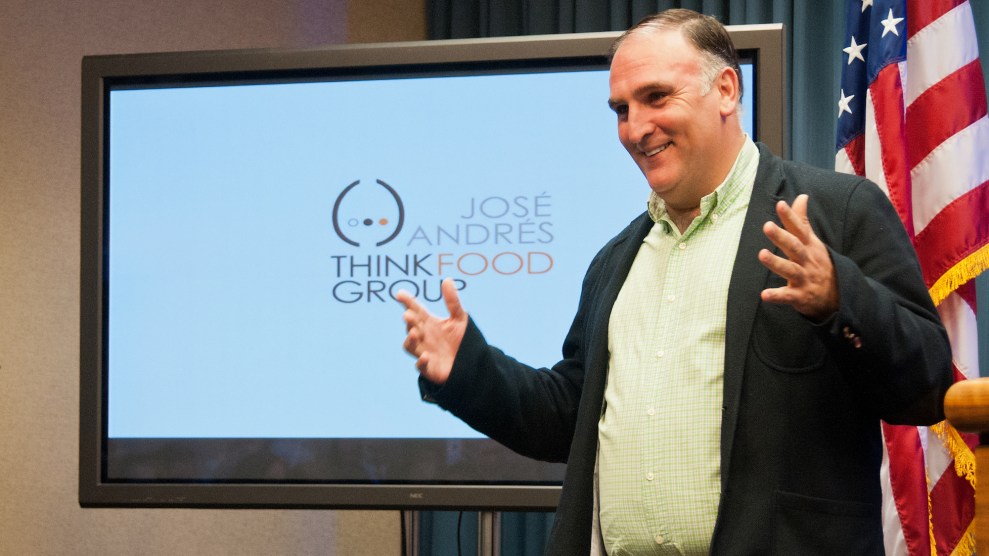 José Andrés, a celebrated Washington, DC-based chef who migrated from Spain in the early 1990s, is a staunch defender of immigrants. He famously pulled out of a deal to run a restaurant at the Trump International Hotel in 2015 after Donald Trump maligned Mexicans on the campaign trail. And in recent years, he has devoted himself to setting up makeshift kitchens in disaster zones and feeding people facing tough circumstances, like the wreckage of Hurricane Maria in Puerto Rico.

Now Trump has partially shut down the federal government in pursuit of a border wall he justifies by spewing anti-immigrant rhetoric, leaving 800,000 federal workers—including 70,000 in DC—without paychecks. Cue Andrés.

In a video from San Juan, Puerto Rico, where he’s still doing relief work, Andrés announced that his group, World Central Kitchen, would be setting up operations at the Navy Memorial in Washington, “right on Pennsylvania Avenue, between the Capitol and the White House,” offering food to be consumed on-site or carried away by furloughed federal workers.

Big news! We will open a kitchen on Pennsylvania Ave this week to join private sector effort to feed federal employees during the shutdown. It’s only fair to feed Americans in need! #ChefsForFeds 👨‍🍳👩‍🍳🥘 Follow @WCKitchen for more details! pic.twitter.com/PRBtlaNug6

By early Wednesday afternoon, the effort was up and running, already having served more than 1,000 meals, according to the World Central Kitchen Twitter feed:

In full swing! We’ve already served over a thousand meals to federal employees and their families. #ChefsForFeds will be open every day as long as there is need. 🇺🇸🍴@chefjoseandres pic.twitter.com/gd77fhkdyv

Meanwhile, the longest federal shutdown in US history drags on, with no sign that Trump will let go of his demands. The president dropped a tweet Wednesday morning doubling down on his justifications for a wall. (For a deep dive into all of the problems with Trump’s logic about immigration and crime, check out this recent post by Mother Jones blogger Kevin Drum.)

It is becoming more and more obvious that the Radical Democrats are a Party of open borders and crime. They want nothing to do with the major Humanitarian Crisis on our Southern Border. #2020!