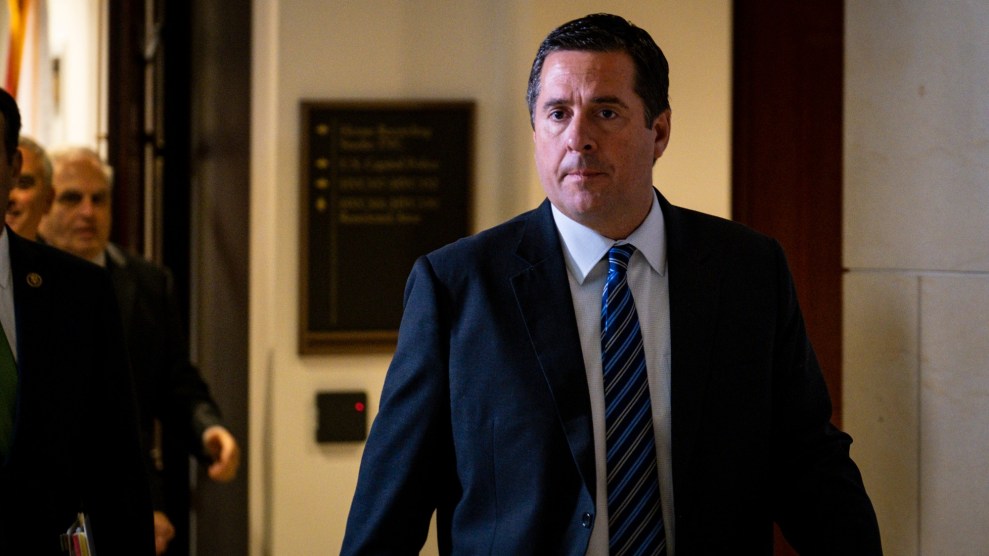 Rep. Devin Nunes (R-Calif.), the top Republican on the House Intelligence Committee, delivered a blistering defense of President Donald Trump on Wednesday that was heavy on performance, but light on substantive details.Pete Marovich/Getty

One of President Trump’s most loyal allies delivered his opening salvo at Wednesday’s blockbuster impeachment hearing—and it wasn’t pretty.

Rep. Devin Nunes (R-Calif.), the top Republican on the House Intelligence Committee, bashed Democrats for airing a “televised, theatrical performance,” and he smeared the witnesses as having “agreed witting or unwittingly to participate” in the “low-rent, Ukrainian sequel” to the Democrats’ “Russia hoax.”

Rep. Devin Nunes addresses William Taylor and George Kent: "It seems you agreed witting or unwittingly to participate in a drama, but the main performance — the Russia hoax — has ended and you've been cast in the low rent Ukrainian sequel." https://t.co/TTPBQjSNgh pic.twitter.com/Janz230bJu

Directly addressing the witnesses, long-serving State Department officials George Kent and William Taylor, Nunes mockingly congratulated them for emerging from the committee’s closed depositions, which had been conducted over the past few weeks, to be “cast” in Wednesday’s public hearing.

Nunes compared the private hearings, which are common during congressional investigations and were used by Republicans during their probe into the attack on the American consulate in Benghazi, to “star chamber auditions,” which took place, he said, solely as a Democratic maneuver to oust Trump from office after a “three-year-long operation by the Democrats, the corrupt media, and partisan bureaucrats” failed to do so.

Nunes’ aggressive attacks did not add much credibility to Trump’s defense, which has oscillated between denying the central fact of the case—that he pressured Ukraine to investigate his political rivals—and arguing that this action might be unusual, but does not merit impeachment. Neal Katyal, who served as the Obama administration’s solicitor general, said on Twitter that Nunes “reminds [him] of a bad Supreme Court advocate, hiding all the flaws in a case by pretending they just don’t exist.”

“It lacks credibility,” Katyal wrote. “Everyone knows what [Trump] did was wrong, the question is simply if it is impeachable.”

Right-wing Twitter, naturally, had a much different view of Nunes’ performance:

– Schiff promised he had "proof" of Russian collusion – he lied