PEDESTRIAN FRIENDLY….Atrios has a couple of links today to (a) a new suburban development somewhere in Indiana and (b) his own Philadelphia neighborhood. The Indiana burb was chosen specifically because it was fairly extreme in the sense of being completely isolated and therefore 100% car-centric, about which he says:

Suburban development is inevitably going to be automobile-centric….However, being automobile-centric and being designed in a way which almost entirely excludes the potential for other modes transportation are very different things. The car and the light rail can coexist. Sidewalks can run to areas with retail. One could even allow a corner store and a pub within a residential neighborhood! Maybe, just maybe, there can be small corridors of street level retail without giant parking lots, small town style. Places like this do exist, mostly but not just in older suburbs.

Developo-blogging is pretty far outside my wheelhouse, but I want to wade into this momentarily. Not because I have any huge point to make, but just to provide an illustration of how hard it can be to create genuinely non-car-centric spaces outside of small towns and urban cores. 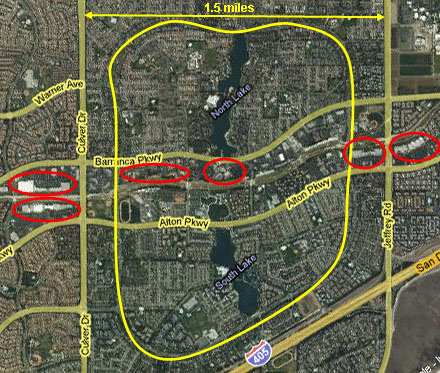 I live in a subdivision of Irvine, California, called Woodbridge. It’s actually fairly famous as one of the original master planned communities of the 60s, and believe you me, it’s master planned to within an inch of its life. This has its drawbacks (lots and lots of beige houses), but there are also benefits. The main one is that it really was planned as an integrated community of sorts.

To get an idea of what I mean, here’s a Google Earth picture of Woodbridge. It’s the piece inside the yellow oval loop plus the strip just outside it, and the total population is about 30,000. There are houses and apartments on the north and south, with the central section reserved mostly for shopping, churches, schools, medical offices, parks, and so forth. There are sidewalks everywhere, of course, and also bike lanes.

The central section is actually pretty handy. There are six separate areas designed for shopping (outlined in red), and those areas include four supermarkets, a couple dozen restaurants, three department stores (though one is shutting down), a bookstore, two movie theaters, two drugstores (with one more about to open), several banks, a hardware store, two Blockbusters, and lots of other miscellaneous shops. Every single one of these places is safe, easily accessible, brightly lit, and a maximum of 1.5 miles from every single point within Woodbridge. Short of being downtown, this is about as walkable as it gets.

And walk it I do. All the time. (This isn’t out of environmental altruism, it’s because I shop for food daily as a way of forcing myself to get out of the house and get some minimal exercise.) And here’s the thing: aside from occasional dog walkers, I have the place to myself. Despite the fact that it’s about as pedestrian friendly as a suburb can be, nobody walks anywhere. They don’t bike either — the only cyclists I see are biking for exercise. Woodbridge is, as near as I can tell, about 99.9% car-centric despite having a design that’s about as pedestrian friendly as you’ll find in a suburb.

Like I said, I don’t have any big axe to grind here — except to say that as important as pedestrian-friendly design is, it’s also possible to overstate that importance. Something more has to happen to reduce our dependence on cars. Maybe the price of gas just needs to double a couple more times. Maybe better mass transit is the key. Maybe something else. But here in Woodbridge, anyway, we built it and they did not come. Not on foot, anyway.