As I’ve mentioned before, one of the big problems with reaching peak oil isn’t just that oil prices will go up, but that they’re likely to spike up and down fairly violently.  In 2006, for example, demand for oil pretty much bumped up against the total available supply, which meant that even a small amount of additional demand was enough to send oil prices spiraling up past $150 in little more than a year.  The ensuing recession reduced demand by only a modest amount, but that was enough to cause oil prices to plummet to under $50 in the same timespan.  And this isn’t just a demand-side problem: a small glitch in supply could easily have caused the same kinds of violent price spikes.

As a general rule, the world can handle high oil prices.  In fact, to the extent that high prices get us off our butts and looking for cleaner, more sustainable sources of energy, high oil prices are a good thing.  But what the world economy can’t handle is constant, huge gyrations in oil prices: nearly all of our recessions since 1973 have been jump started by a sudden spike in oil prices.

So what happens next?  Via Ryan Avent, Paul Kedrosky points us to this projection from McKinsey, which shows that demand will once again bump up against supply very shortly: probably within a couple of years, but almost certainly within four years at the outside.  And when that happens, prices will once again rise unpredictably.  A strike in Venezuela could cause oil prices to double in less than a month.  A rumor of new supergiant field or a small recession could cause a subsequent collapse.  Price changes of 100% in short periods will become common.

You can probably already figure out where this post is going, can’t you?  Wild spikes in oil prices are very bad news for the global economy, and the only way to avoid them is to permanently reduce global demand for oil so that we once again have enough spare pumping capacity to keep prices relatively steady — high and rising, perhaps, but at least rising fairly predictably.  That means we need higher mileage cars (global warming isn’t the only reason for stronger CAFE standards), electrification of transportation, better conservation and efficiency measures, and more investment in solar, wind, and biofuels.  And all this needs to be done fairly quickly if we want to avoid an economy permanently at the mercy of OPEC oil.  Even 2013 isn’t that far away. 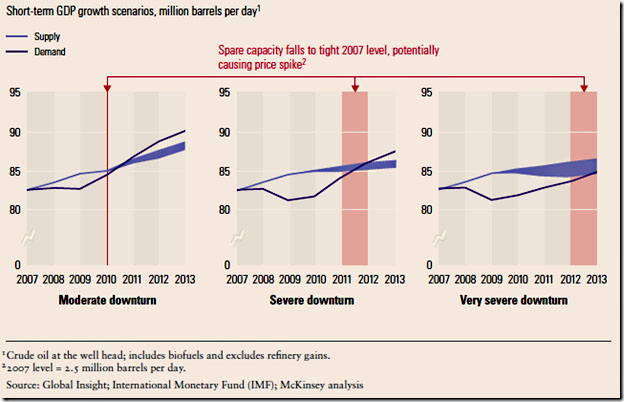