Our lives, our families, and our rights are not a joke, Mr. President. The discrimination faced by gay people — whether coupled and single — is distressingly real and persists 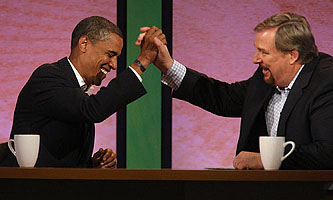 even for same-sex couples in Iowa and other states where gay marriage is legal. Stop fucking around and start delivering on your campaign promises to us, to our families, and to our children.

Obama’s slow progress is a disappointment and Sullivan’s and Savage’s anger is wholly justified.  At the same time, I sort of wonder: did either of these guys actually watch Obama during the campaign?  Did he do anything to suggest that he’d be anything other than extremely cautious and pragmatic on gay issues?  Because the guy I saw on the stump was relentlessly measured.  He was endlessly dedicated to bipartisan comity.  He was pals with Rick Warren.  He was anxious to turn down the volume on the culture wars.  Even when he was way ahead in the polls he declined to attack California’s Proposition 8.

I’d like to see Obama get off the stick and do something about DADT too.  It’s a disgrace that it’s still around.  At the same time, it’s hardly a surprise that he hasn’t made this his highest priority out of the gate.  He gave us plenty of warning.