Brad DeLong tries to figure out why the Congressional Budget Office has been so pessimistic about the potential for healthcare reform to reduce long-term costs:

The problem, I think, is that the CBO has a category for cost control but no category for getting system incentives right. It is a budget office, after all, not a philosopher-king office. The problem, however, is that it is the only arbiter out there. And there appear to be a lot of members of congress who think controlling costs = getting system incentives right. 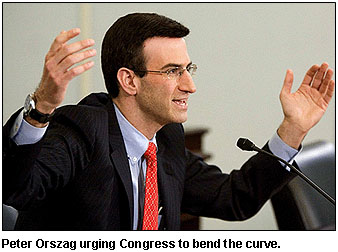 treatments and so want to spend a lot less. If we get the system incentives right, then whatever we spend on health will turn out to be the right thing to do.

There are useful things we can do that will help control costs.  Better IT, for example.  Lower administrative overhead.  Comparative effectiveness research.  For the most part, though, these are one-shot deals.  They’re worth doing, but you only get to do them once.  And once they’re done, costs keep going up.  They go up from a lower base, but they still go up.

But in the end, both as individuals and as a society, we’re going to spend as much on healthcare as we feel like spending.  And why not?  We should spend our incomes on whatever we value the most, and for a lot of us that’s healthcare.  If that turns out to be 30% of GDP, then it’s 30% of GDP.

And that’s what will eventually bend the curve in healthcare costs: when we all finally decide that we’re spending enough.  Whether we’re doing it as individuals, as employees with healthcare insurance, or via tax dollars, we’ll get serious about controlling costs when we decide that costs have gotten too high.  Until that happens, though, well-designed incentives may make things more efficient but won’t appreciably reduce the rise in total spending.  I don’t think politicians can afford to say that in public, but it’s probably true.