Ross Douthat says that both Sarah Palin’s popularity and her notoriety are heavily class-based:

Palin’s popularity has as much to do with class as it does with ideology….Here are lessons of the Sarah Palin experience, for any aspiring politician who shares her background and her sex. Your children will go through the tabloid wringer. Your religion will be mocked and misrepresented. Your political record will be distorted, to better parody your family and your faith….All of this had something to do with ordinary partisan politics. But it had everything to do with Palin’s gender and her social class.

Well, look: Bristol and Levi went through the tabloid wringer because they were practically sent from Jerry Springer central casting.  If you’re an unknown candidate for national office sprung on the American public, and a few days later that public discovers that your teenage daughter has gotten pregnant out of wedlock, the tabloids are going to go nuts.  Maybe that doesn’t reflect well on America, but it’s got nothing to do with class.

As for Palin’s religion being mocked and misrepresented, Barack Obama got a wee taste of that too last year, didn’t he?  And Palin’s political record wasn’t distorted any more than anyone else’s.  Hell, maybe less. 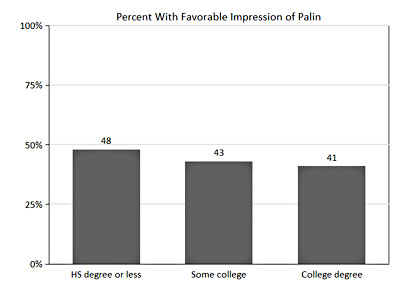 When you base your whole political persona on an obvious lie about being a sworn enemy of federal earmarks — in a state that’s practically the earmark capital of the country — and repeatedly claim to have opposed a bridge to nowhere that you were plainly in favor of, well, the distortion started right at home, didn’t it?

Still, all that said, I’d agree that Palin’s appeal is essentially based on class resentment.  She gets her biggest applause lines when she talks about liberal elites who look down on regular people; the mainstream media peddling lies and propaganda; government bureaucrats who think they know better than you; and big city intellectuals and their contempt for small town values.  That’s all heavily class based.  And yet —

Then some facts intrude.  John Sides presents this chart today showing where Palin’s base of support comes from.  And it turns out that there’s very little difference between her support among the college educated and her support among high school grads.  That’s not a perfect proxy for class, and it doesn’t show strength of support, which might well be more fervent in the lower SES groups.  Still, it’s not too bad a proxy, either.  Class might have less to do with this than Douthat thinks.  Maybe she’s just a loon after all.