If you read Atul Gawande’s New Yorker article about central line infections three years ago, you already know that CRBSIs — catheter-related bloodstream infections — maim and kill tens of thousands of hospital patients a year. And you also know that these infections can be reduced nearly to zero through the use of a simple checklist that boils 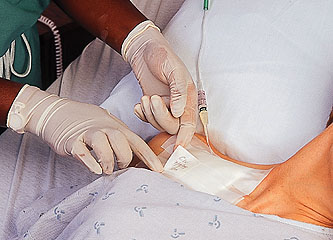 down to “keep everything really clean.” So it’s infuriating all over again to read today that a new survey of doctors and nurses suggests that pretty much nothing has changed:

Why aren’t hospitals leaping to adopt these best practices?…. More than half of the 2,075 respondents, most of whom were infection control nurses employed by hospitals, reported that they use a cumbersome paper-based system for tracking patients’ conditions that makes it harder to spot infections in real time. Seven in 10 said they are not given enough time to train other hospital workers on proper procedures. Nearly a third said enforcing best practice guidelines was their greatest challenge, and one in five said administrators were not willing to spend the necessary money to prevent CRBSIs.

[Peter] Pronovost said part of the problem was that many hospital chief executives aren’t even aware of their institution’s bloodstream infection rates, let alone how easily they could bring them down. When hospital leaders decide to create a culture in which preventing infections is a priority, he added, nurses feel empowered to remind physicians to follow the checklist when inserting catheters, physicians are provided antiseptic soaps as part of their catheter kits and infection control personnel have the best tools to monitor patients.

Italics mine. How is it possible that hospital CEOs don’t even know about this? We’re talking about something that saves lives, costs almost nothing, and would probably reduce healthcare costs by over a billion dollars nationally if it were adopted aggressively. And equally, why is our medical system still so screwed up that doctors routinely treat nurses like serfs who are too cowed to insist on sterile procedures? I mean, talk about the cost of lingering patriarchy. In this case, it might someday kill you.